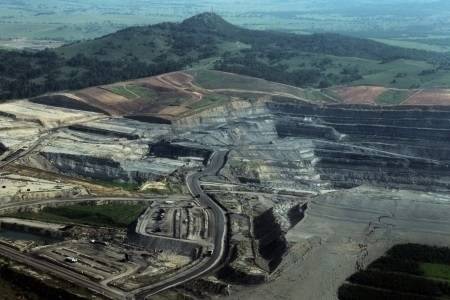 IF YOU thought Shenhua's mine was the ultimate test of big coal's grip on government, you'd be sadly mistaken. Worse is yet to come.

IF YOU thought Shenhua's Watermark mine was the ultimate test of big coal's grip on government, you would be sadly mistaken - worse is yet to come.

Plans for massive mines that will dig into prime agricultural country across Australia are progressing, sparking strong community opposition.

Hillside has plans for a big copper mine for the Yorke Peninsula. KEPCO, a coal mine in the Bylong Valley.

Anglo American wants to build a mega pit at its Drayton mine on the doorstep of Thoroughbred studs in the Hunter.

Rio Tinto wants to extend its Warkworth mine into the backstreets of Bulga village.

And don't forget NSW's most recent addition - Whitehaven's Maules Creek mine, which has been plagued by rolling protests. And the three mega-projects in Queensland's Galilee basin.

But the greediest grab of all is pitched by the big Australian, just 20 clicks down the road from Shenhua's Watermark.

BHP's Caroona project won't perch its coal pits in the ridges above the black soil like Shenhua.

It wants to hollow-out the coal seams directly under the productive plains.

Both miners plan to export about 10 million tonnes of coal a year.

The Liverpool Plains is at risk of becoming the next Hunter Valley.

Dairy Australia reports milk production, which is booming across the country, fell more than 30 per cent in the Hunter between 2002 and 2014.

Experienced stock agents told The Land that cattle yardings had as much as halved in previously prosperous markets in the Hunter.

Mining pressure along the Hunter River has seen water traded as high as $2000 a megalitre.

According to anti-mining lobby group Lock the Gate, mining takes 55pc the of high security allocations.

Cue Tony Abbott launching the Ag White Paper; "One day the coal will have been dug up, the gas will have been extracted, but we will always need food and our land forever".

That day is fast approaching, at least in the Hunter - and the trains are rattling north to the black soil.

"The last two mining decisions (by the PAC) were rejected, this one's (Shenhua Watermark) been approved - it's being done at arm's length," he said.

He was referring to the PAC's knockbacks of Warkworth and Drayton.

But no worries for Rio and Anglo. Once they'd picked up their bottom lips they came back for another crack at essentially the same game, with slight alterations to the rejected plans.

"I do not support any mining on the black soil of the Liverpool Plains," he said.

But new laws to protect prime land are not on the cards at Macquarie Street.

NSW's Strategic Regional Land Use Policy (SRLUP), the government's nod to protecting valuable farmland, kicks in when a mine is proposed on country identified as prime by the Department of Primary Industries.

But it will take more than that to stop BHP's Caroona mega mine careering ahead.

The government's Gateway Panel to assess mining impacts to SRLUP farmland, has used little more than a wet lettuce to keep KEPCO in Bylong and BHP's Caroona in check.

In 2014 the Gateway decided Bylong was left wanting in 12 out of 13 criteria, including impacts on soil, fragmentation of land uses, groundwater and subsidence.

Despite the findings, the Gateway issued a conditional certificate.

It's not so hard to believe when its only other option was to issue an unconditional certificate and wave them through to the next stage of the process.

The project would have "direct and significant" impacts on agricultural land and groundwater, impacts from long-wall mining on aquifers were not sufficiently studied, whopping subsidence across the laser-levelled irrigation paddocks would be between 1.5 and three metres and groundwater impacts for cropping country outside the project boundary are potentially significant.

The miners will address the Gateway's concerns in the next steps of the approval process, when they submit an environmental impact statement to government.

Under the NSW planning system, their impact statements are advocacy documents, used to prove their mines don't breach any laws or regulations.

Mining companies hire environmental consultants who work with them to gather data and write the reports.

It's then up to the PAC and the department to spot the flaws.

Often this process misses a lot of important issues, as evidenced in the public submissions to the impact statements.

It would be better for the miners to pay for an independent body who is accredited by government to assess plans, do fieldwork, collect data and prepare the environmental impact statement.

This could at least reduce community angst caused by the current process.

How would you feel as a farmer neighbouring Shenhua's Watermark to hear, after an eight year saga and reams of reports, that the Murray-Darling Basin Authority found it necessary to spend $1m on groundwater research?

The authority wanted to improve "important technical and scientific support for decision making" - even though the PAC was satisfied with the studies backing Shenhua's predicted groundwater impacts.

"The understandings of groundwater is nowhere near as sophisticated as surface water," said MDBA chief executive Rhondda Dickson.

Or that the government had re-written the definition of a floodplain - which can halt mine development - after Shenhua and BHP began to develop their plans?

The PAC fired a shot across Caroona's bows when it granted approval for Watermark, urging the government to ban mining on the black soil.

"The commission agrees with earlier findings that the NSW government should do more work to prohibit mining on the highly valuable black soil plains," the PAC's report said.

But history shows if BHP plans to undermine prime farmland at Caroona, the government will do little to stop it.

The question is, can the people - particularly war-weary farmers - prevail?

The story Plain and simple, agriculture is at risk first appeared on Farm Online.