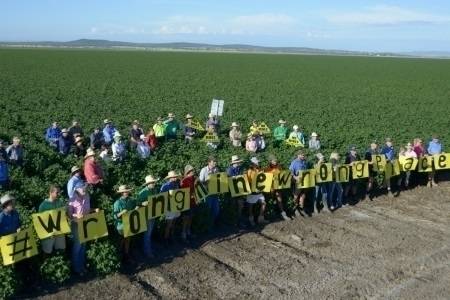 Farmers line up to promote an anti-mining campaign on the Liverpool Plains campaign.

SHENHUA cleared a major hurdle for the controversial Watermark coal project, with a key report backing the NSW government's approval.

SHENHUA cleared a major hurdle in its attempt to gain approval for the controversial Watermark coal mine, with the Commonwealth’s expert scientific panel finding project’s impacts to water resources are acceptable and manageable.

The Chinese miner plans to dig a 10 million tonne per annum open cut coal mine in ridge country above the Breeza Plain. At issue for farmers is fear for the groundwater that feeds the bores - which water some of the most productive cropping country in Australia.

Federal Environment Minister Greg Hunt has the final say before the mine is approved to start digging.

Farmers reacted angrily when NSW approved Watermark. Scepticism centred on the water studies prepared by Shenhua, which said draw-down on the aquifers that feed the black soil plains at Breeza would be modest, and connections between the aquifers which would be limited.

As part of that process he commissioned the Independent Expert Scientific Committee on Coal Seam Gas and Large Coal Mining Development (IESC) to assess the science submitted by Shenhua describing Watermark’s potential impacts to water resources.

“The IESC’s advice will now be considered as part of the assessment of this project under national environment law. This process will be comprehensive and based on the best available scientific information,” Mr Hunt said.

Today’s findings from the IESC agreed with the PAC’s assessment.

Groundwater impacts are “likely to be less than those predicted in numerical groundwater model”, the IESC report said.

“The extent of the groundwater drawdown in the alluvial aquifers is considered unlikely to be significant.”

The IESC said the science presented to the PAC was sound, and “considered adequate to assess the potential hydrological impacts to groundwater”.

“The IESC also reiterated the Project had adequately addressed any uncertainty about the hydraulic conductivity between the Gunnedah Formation, the Narrabri Formation and Permian ‘hard rock’ aquifers.”

However, the IESC said further development of ongoing monitoring of groundwater would be required of Shenhua, if Watermark were developed.

More work is needed to assess impacts to sensitive local woodlands and to capture highly-detailed data to detect changes in groundwater systems, the report said.

The IESC said “although considered unlikely, if drawdown impacts were to extend further than predicted”, native species protected under the EPBC Act that rely on groundwater such as White Box, Yellow Box, Blakely’s Red Gum and grassy woodland could be impacted.

“In order to better understand the potential impacts to groundwater dependent ecosystems, a systematic assessment, including EPBC-listed ecological communities is needed.”

Mr Hunt is due to make a final determination by July 9.