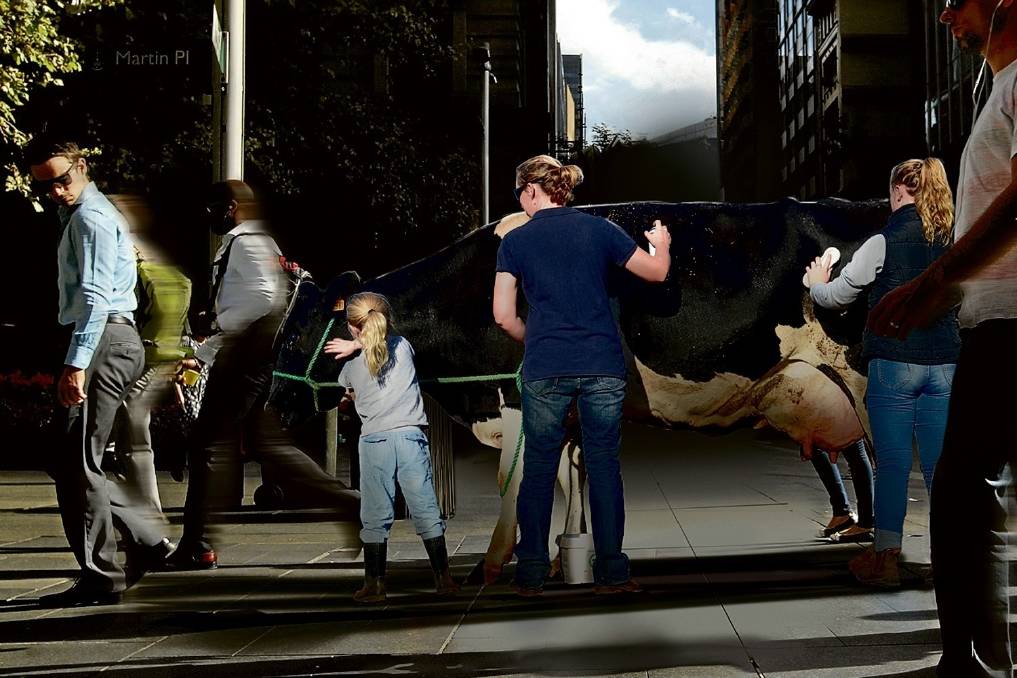 Ag's 'failure to communicate' has been put under the spotlight.

AGRICULTURE'S premiere event, the Sydney Royal Show, has finished for another year, but the discussions haven't.

AGRICULTURE'S premiere event, the Sydney Royal Show, has finished for another year, but the discussions haven't.

About 900,000 people passed through the gates across 10 days of the show - a unique opportunity for producers to meet the consumers of their products.

But did the producers make the most of their golden opportunity? Perhaps not.

For years she's noticed dairy exhibitors in the ring ignore the public, too focused on preparing their animals and presenting them for judging.

"Most farmers recognise it is really important to engage with the public, and they don't get many opportunities to do that, but when it comes to the Sydney Royal, they're so focused on the blue ribbon they tend to find the general public a distraction."

Mrs Strong learned of a friend who this year observed the lack of engagement between exhibitors and the public at the cattle lawns.

"He did not come across one farmer who walked up and engaged with a member of the public.

"He had to approach them, and even then, he only had one person who genuinely engaged with him and was interested in having a conversation and sharing their experiences."

She said it was vital producers formed firm emotional bonds with consumers and gave them the time of day to help them understand agriculture better.

"It is really important as farmers we actually acknowledge the community isn't silly, they don't need to be educated, they need to build relationships with the farmers who grow their food and understand their challenges."

"While there are a few good exhibitors who do engage the public, some exhibitors can be quite rude," Ms MacDonald said.

"They laugh at the ignorance of the people who come from the city - they try to make a joke of it because they don't quite understand they can have a positive impact.

"With all the stresses on the exhibitors, they don't have the patience to deal with the public, but the last thing we want to do is give the public a negative experience of our industry."

For exhibitors like Todd Wilson, Shirlinn Jerseys, Tamworth, the show is an important event for business.

"We are there to have a good time and talk to the public, but we're there for our business and it's important to be as successful as we possibly can in the show ring," Mr Wilson said.

"It's great to be able promote our industry and show how well we do care for our animals, but it's harder for us to do that on show day."

This year's Royal Agriculture Society (RAS) Rural Ambassador Charles Mill, Delungra, said there was a time and a place for exhibitors to interact with the public, but competition morning wasn't one of them.

"On show day people are 100 per cent committed to their animal, and that's important, too," Mr Mill said.

"I think the dairy section put on a really good spectacle, but I can certainly see where Lynne is coming from.

"If we're in Sydney, we have to make the most of the opportunity to promote our product and our industry, and that falls on everyone."

In the past, RAS and industry initiatives included tours of the cattle sheds and people to field questions on the cattle lawns, a solution which Mrs Strong agreed worked well.

RAS cattle chairman Greg Watson, Gunnedah, said this year these initiatives were discontinued because of low levels of interest from the public.

He said the RAS always looked at ways to improve the public's experience, and had plans to display more information around the cattle lawn.

"This is something we can reintroduce," Mr Watson said.

But he was not convinced exhibitors had a responsibility to engage the public.

"Those that are so inclined should do it, but whether they have the responsibility to do so is questionable," Mr Watson said.

WHEN it comes to improving the image of agriculture in the eyes of the general public, there's a lot of work to do, according to public relations expert Robbie Sefton, Sefton and Associates, Tamworth.

She said while urban Australians valued agriculture, it was often seen in a state of crisis or complaint.

"In the urban media the message from the bush often comes through as 'you don't understand what its like out here' and 'you don't work as hard as we do'," Mrs Sefton said.

However, farmers are often far more positive, but this side of the message is not cutting through.

To turn it around, agriculture needs to take control of its messaging.

"We can make things better by talking about the issues, but importantly, by focusing on what we are doing to make a difference to the issue."

That's why opportunities for the collective promotion of agriculture, like the Sydney Royal Show, are so powerful, she said.

Individual farmers have a critical role in making the necessary impact at those types of "showcase" events.

While not every farmer had the skills or confidence to share information about themselves or their industry, it was important.

Australian Futures Project policy director Dr Fiona McKenzie said there needed to be a focus on building the communications skills of the entire agricultural community.

"A lot of people lack confidence and don't think they should or are able to communicate their story when in fact they can," Dr McKenzie said.

"The sector requires capacity-building but it's more than teaching people how to use Twitter, it's about understanding there is a story to tell, why it's important, and how to tell it effectively."

The theme of communication will form a key part of The Australian Futures Project's Actions for Australian Agriculture - a program bringing together a diverse group of 50 people from July, 2015, to May, 2016, to incubate ideas to improve agricultural viability in the state. Applications close April 24.

The story A Royal (lack of) engagement first appeared on Farm Online.