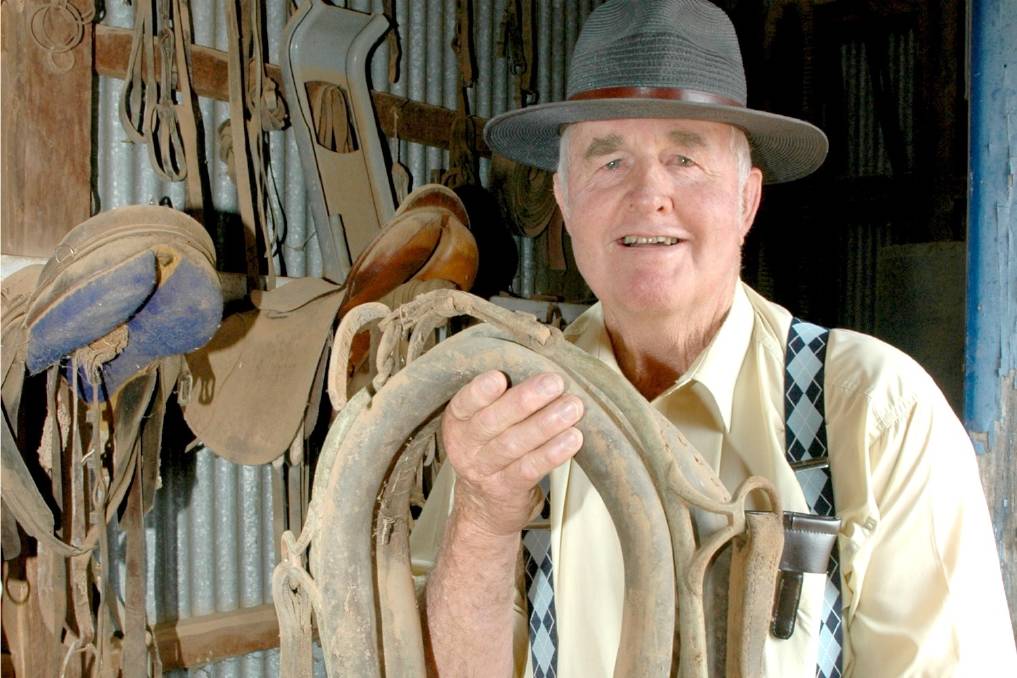 Ron Job, now retired at Parkes, says a lot of memories return as he inspects some of the horse harness and gear stored in the tack room at "The Grange", Peak Hill, which was attached to the original stables converted into a machinery shed and workshop a long time since working horse days.

RON Job, now retired at Parkes, says a lot of memories return as he inspects some of the horse harness and gear stored in the tack room at “The Grange”, Peak Hill.

RON Job, now retired at Parkes, says a lot of memories return as he inspects some of the horse harness and gear stored in the tack room at “The Grange”, Peak Hill.

The tack room was attached to the original stables, which have been converted into a machinery shed and workshop now the work-horse days are long gone.

“The Grange” is owned by the Frecklington family who settled there in the late 1800s.

The property is now operated by Ian and Lyn Frecklington, who have kept the old gear stored in the tack room where it was left as motor vehicles took over from real horsepower, and have been close family friends with the Job family for many years.

Ron, now an octogenarian, said he and his eldest sister, Joyce, began operating horse teams on his family property “Pine Hill”, when he was nine years of age.

“That was during the Second World war,” he said.

“We only steered them back then – I took full control of the teams when I turned 15.”

The family ran two teams of 14 horses – seven in front and seven behind.

Looking at the leather harness and collar yokes Ron (pictured) said occasionally when the horses weren’t worked he and his siblings under the control of his father would give the gear a spruce up with rendered fat.

“It had to be unsalted fat for obvious reasons,” he said.

“We’d pick a warm day and take all the gear outside and rub fat into it then leave it in the sun to sink into the leather.”

Ron was born in Peak Hill, but the family lived on “Pine Hill”, the original Mungery Station homestead block before “Mungery” was split for closer settlement prior to the turn of the 20th century.

The Jobs purchased the land in the 1920s.

He has several photos hanging on the walls in his house at Parkes of some of the horse teams he drove when working at “Pine Hill”.

The photos were taken on an old Kodak Brownie camera and blown up and framed.

“They’re of sentimental value to me, a time I remember and cherish,” he said.

The teams worked six days when ploughing, sowing and harvesting, plus doing any other farm work, but they all rested on Sunday.

“Dad would never let them be yoked up on Sundays,” he said.

“They were good machines with a 20 run unit – you could use them as a scarifier too,” he said.

When he was old enough to operate on his own he’d get up early in the morning and go and feed the horses.

“We never used chaff, only good hay,” he said.

“Dad made sure he cut the hay just before it flowered and grain started to form so the mice wouldn’t eat it.”

Ford and Bencubbin were the main wheat varieties then.

“When cutting hay we’d go out to the paddock and put together about 100 sheaves for feed reserves and then we’d go back home and have our breakfast while the horses were having their feed,” Ron said.

“We’d then go back to the house paddock and couple them all up and go to work.

“On working days at about 6am when you first got out of bed you’d feed the horses which would be running in a house paddock nearby.

“Once they saw you coming they knew what was on.

“Then after we had our breakfast we’d go and couple them up, put the collars on them – you’d have to yoke them each morning.

“Then you’d lead them in four rows of four, three, four, three abreast, up to the paddock you were working because seven abreast wouldn’t fit through the gates.”

By the time Ron said he’d have things together he’d be starting work at about half-past eight to nine o’clock.

“You’d go right through the day and wouldn’t stop for dinner (lunch), just take some sandwiches with you.

“Stop for about half-an-hour and eat them and that gave the horses a breather too and you’d keep going to just before sundown.”

Ron said in winter he’d have to get the horses home earlier.

“They needed to be uncoupled so they could dry out before the night air came and it got too cool.

“What used to fascinate me though, there was a bit of loose ground near where we uncoupled them and nearly every time you let them off nearly every one of them would go and have a roll.

“Then you’d give them another feed of hay before going out into a paddock and graze what grass was there.”

“Dad used to like about a half-draught or a bit heavier.

“He used to have a Clydesdale stallion and he’d put about six mares with him each year just to keep his numbers coming through.”

Ron said they bought their first tractor in 1950.

“We put the 1950 crop in with a horse team and a little International W6 tractor.

“It was supposed to be about 28 horse power, but I reckon 14 horses could pull it backwards.”

The story Memories of the working horse first appeared on Farm Online.