AN ambitious goal of 40,000 new jobs for regional NSW is on the Coalition’s agenda, but what’s happening behind the headlines?

AN ambitious goal of 40,000 new jobs for regional NSW is at the core of the Coalition’s Regional Kick Start plan, but what’s happening behind the headlines?

According to the latest labour force data from the Australian Bureau of Statistics (ABS) jobs growth in regional NSW has been static for the last three years.

Regional growth is now more pressing than ever, with widespread decline predicted by the NSW Department of Planning across much of NSW from 2011 to 2031 (see graphic).

However, NSW Deputy Premier and Nationals leader Troy Grant said despite the negative data from the ABS, the Coalition had actually met its target. 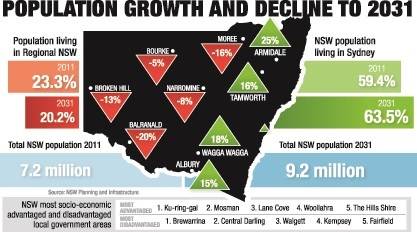 “The latest job vacancy figures for regional NSW are very encouraging, showing a 6.9 per cent increase in internet job vacancies from November 2013 to November 2014.”

“The ABS has belled the cat and exposed their broken promise,” he said, “if ever there was a policy whacked together on the back of an envelope it was the Decade of Decentralisation.”

The Land has campaigned for more than a year on the need to boost investment in regional infrastructure, including bridges, roads, freight rail, hospitals and small towns.

“The further you get into the centre of the State there isn’t too much money going into roads – some are in worse condition than dirt roads because you can’t grade them,” he said.

Government data has shown that relocation grant schemes, including Evocities, had not encouraged regrowth in small towns, but helped to concentrate prosperity on already flourishing centres.

Evocities was designed to encourage people to relocate from the Sydney to Albury, Armidale, Bathurst, Dubbo, Orange, Tamworth and Wagga Wagga and while these towns are predicted to grow in the next two decades, the picture is bleaker for towns further afield.

“It can suck the life out of smaller towns... you need to find a balance,” he said.

The economy had been the government’s top priority since entering office, Mr Grant said, and its economic management had created potential for future growth.

The June Budget saw NSW retained its AAA credit rating and delivered a near $1 billion surplus.

While some regions “had experienced reduced employment,” Mr Grant said “South Eastern NSW and the Illawarra and the Murray and Riverina have seen their overall employment levels increase in the 12 months to December 2014.”

The government’s planned sale of 49 per cent of the State’s electricity network is projected to generate $20 billion, after interest earned and the federal government chips in with $2bn in incentives.

The Nationals have 30 per cent of the revenue for regional NSW.

Mr Grant said the windfall would be channelled through its infrastructure scheme, branded Restart NSW, into “critical regional infrastructure, including roads, rail, water and health infrastructure”.

The story Decline on the cards for small towns first appeared on Farm Online.