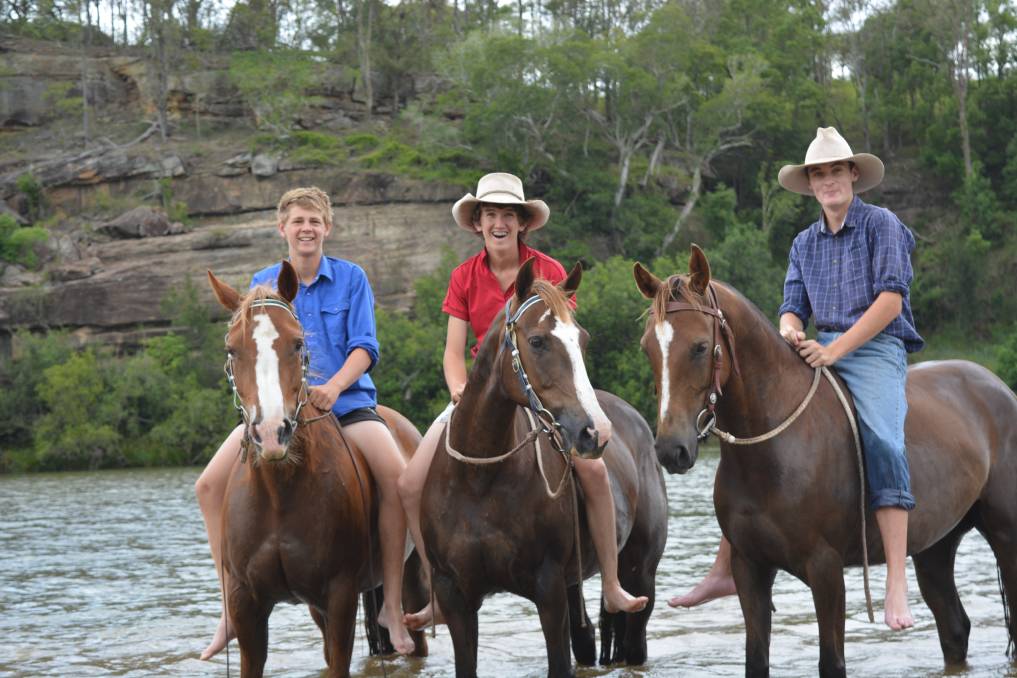 North Coast mates Ben Ensby, 15, from Fairy Hill near Casino on Nike; Tom Morgan, 17, from Braunstone on Style, and Lachie Ellis, 15, from Coutts Crossing, on Holly, cool off in the Clarence River.

THEY have plenty of wins, but for these Clarence Valley team penning champs the sport is as much about fun as it is about ribbons and prize money.

THEY have plenty of wins, but for these Clarence Valley team penning champs the sport is as much about fun as it is about ribbons and prize money.

And that is precisely why their parents, and fellow club members at Clarence Valley Team Penning, believe the sport is so valuable - it encourages the development of some very important life skills.

"We joke that the boys don't like getting beaten but team penning gives our kids, and everybody involved, so much more than just a chance to try to win something," said Karen Morgan, vice president of the Clarence club, and mum to Tom.

"It's such a healthy thing for families to be involved in."

Tom, 17, from Braunstone; Ben, 15, from Fairy Hill, and Lachie, 15, from Coutts Crossing put their skills to the test each month at their club meet, run at the Kangaroo Creek and Coutts Crossing Charity Sports Club arena near Grafton.

They also travel regularly to competitions throughout northern NSW, generally making a weekend camping trip out of it.

The young men are all from beef properties and have been riding horses all their lives.

They met at pony club and moved onto campdrafting but when introduced to team penning two years ago, knew that was the sport for them.

"It's a team thing, where you rely on your mates and that's what we really like," said Tom.

"Plus you get multiple runs so if you mess up, you get the chance to do better."

At the Nationals in Tamworth last year, they won their first round and finished fifth overall and they also have a State title from 2013 to their name.

An impressive 34.33 seconds is their personal best, achieved in the middle of this year.

They watch the runs leading up to their event to "suss out" the cattle and make changes to their strategy according to what cattle they draw.

"Tom is like the boss, he calls the shots mostly," Ben said.

"You have to be flexible and have a few plans of attack because it does come down to what cattle you get and how you can work with that."

"It's all about giving it your all when you're out there, so we're not too sensitive about what happens in the heat of it."

A young club, the Clarence outfit started two years ago "basically because a fellow in town liked the idea of team penning and thought it would catch on - and he was right", Mrs Morgan said.

"Campdrafters came along to see what we were doing and realised it was more a family-oriented sport and liked that.

"Everybody involved, from anywhere in the country, is encouraging and we all like that it is doing our kids a lot of good."

The story Team penning champs in it for fun first appeared on Farm Online.