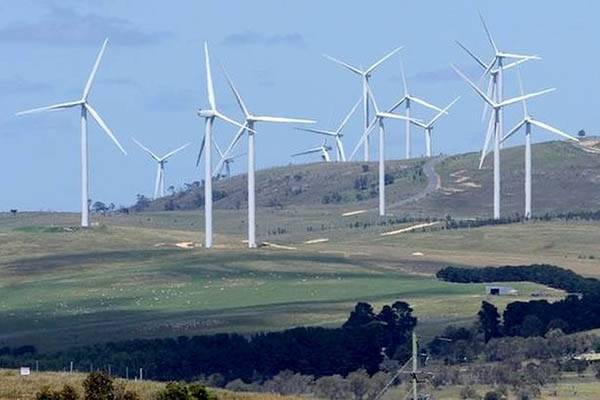 UP TO 40 wind turbines have been proposed for a wind farm at Biala in the Southern Tablelands, but it is not just the turbines that have some Gunning landholders worried.

UP TO 40 wind turbines have been proposed for a wind farm at Biala in the Southern Tablelands, but it is not just the turbines that have some Gunning landholders worried.

Rather, a proposed power line to connect the wind farm to the electricity network has taken local farmers by surprise.

The proponent of the Biala Wind Farm, Newtricity, has told potentially affected landholders of the proposed 132 kilovolts (kV) line that would connect the Biala Wind Farm to the Goulburn-to-Yass 132 kV line near the Hume Highway, just south of Gunning.

According to Newtricity documents, the proposed line is set to feature 18- to 20-metre high concrete or steel poles, spaced up to 200m apart, and with four wires.

Jen Medway, "Hillcrest", Gunning, is the third generation farmer on her property and one of the possibly affected landholders.

She and her husband Jack bought about 400 hectares of land neighbouring their 485ha homestead property just over a year ago, only to discover a few months ago it could have a power line cut through part of it.

"The first we heard about it was through a letter in the mail," Mrs Medway said.

She said the letter asked for feedback within two weeks.

Mrs Medway believed the proposed power line would have an impact on property values.

While not intending to sell or subdivide now, she said the construction of such a powerline would prevent them from selling their property into smaller blocks down the track, and therefore, limit the potential of the property.

She said this would have a real effect on the value of their land, and there were alternatives that should be considered such as connecting to closer, existing power lines, rather than the Goulburn-to-Yass line.

"In most places the proposed line comes close to the road but in our case it cuts straight across the paddock," she said.

"Prior to this, I've only ever thought about the visual impact (of wind farms), not about the actual cost it can have on a business."

Mrs Medway said this issue added to wider concerns within the district about the prevalence of wind farms.

"People have bought for the rural lifestyle, and if it changes too much then it will change what Gunning is about," she said.

"It's a bit too much - a friend of mine is looking around 360 degrees at wind farms."

Newtricity director Annmaree Lavery said an open day had been scheduled in Grabben Gullen Hall on Saturday, January 31, from 10am to 1pm so landholders and community members could speak directly to those involved in the Biala Wind Farm project.

Ms Lavery said it would also be an opportunity to discuss the proposed powerline.

She said there had been a big response from landholders since the mail-out, and Newtricity was still investigating options for the powerline.

"Nothing has been set in stone," she said.

"There has to be a lot of community consultation."

Newtricty hoped to have a planning application lodged for the Biala Wind Farm project with the Department of Planning and Environment in the first half of next year.