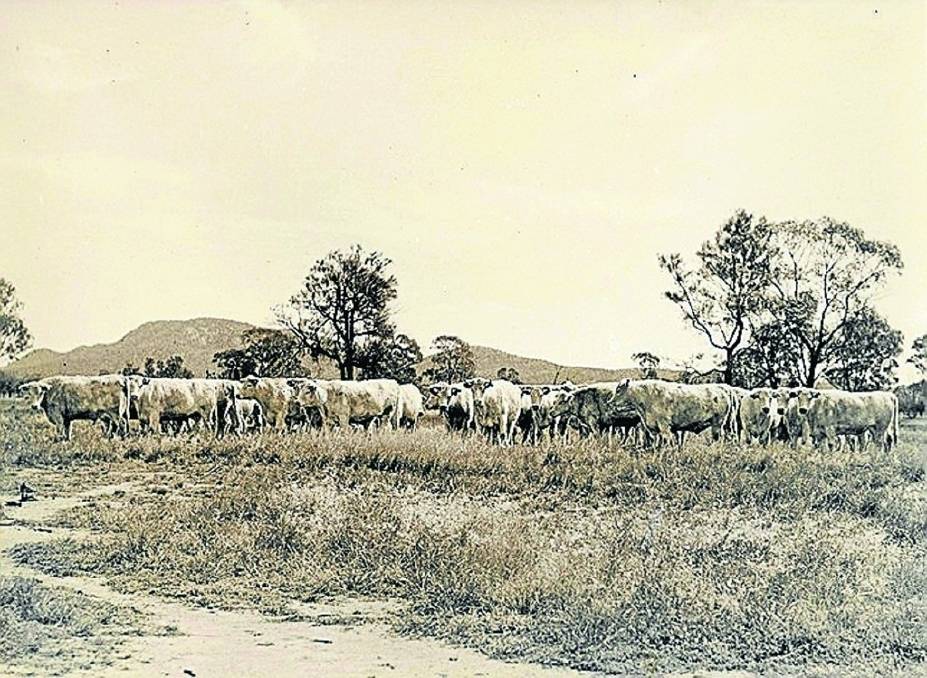 BELOW: Shorthorn bullocks in prime condition on J.J. Leahy’s property, “Manna Park”, west of Forbes. Although Leahy also owned properties fronting the Lachlan River, he found the best finishing country was often to be found further back.

MEN who make a living - and in some cases, a fortune - from farming are by nature inclined to hold onto their trade secrets.

MEN who make a living - and in some cases, a fortune - dealing in pastoral land and livestock are by nature inclined to be reticent, shunning publicity and keeping their trade secrets to themselves.

That's why a newly published book on the life and times of 20th Century mega-dealer John Jeremiah ("J.J.") Leahy is likely to generate much interest - because it's written by somebody "inside the tent".

Gerard Leahy, the youngest (though now well into his 80s) and the sole survivor of J.J. Leahy's seven children, has just completed a 10-year project of writing the story of his father's eventful life.

It's a life that involved most members of his family playing various parts of his wide-ranging operation, and that ended up - before his death in 1959 at 84 - tearing the family apart.

As with many pastoral sagas, it's a story of rags to riches and back to rags again, or - to borrow from the book's title, in a line often used by J.J. himself - Shirtsleeves to Shirtsleeves in Two Generations.

Gerard has written the story in two parts, the first book (just completed) dealing with the first generation (his father's), and the second, which is now in production, following through to his own generation.

It's probably the first book just released which will generate the more general reader interest, dealing as it does with J.J's rise from inauspicious beginnings at Gundaroo (where his father, the son of a convict, had a butcher's shop) to one of the biggest pastoral names in NSW.

During a dealing career spanning half a century he owned or leased more than 100 properties across NSW and Queensland, his woolclip was at one time thought to be the biggest in Australia and his prime stock were regular sale-toppers at Sydney's Flemington stock markets.

Among the major properties that passed through his hands were "Oxley" at Warren, "Manna Park" at Forbes, "Fullerton" at Crookwell, "Tregalana" at Caragabal, "Ardsley" at Bathurst, "Cultowa" at Wilcannia and "Mt Oban" at Mt Isa, Qld.

Essentially a dealer, in both land and livestock, he rarely allowed himself to become attached to any of his purchases and would readily sell if an opportunity for a profit came along.

One exception to this general philosophy, where land was concerned, was his beloved "Manna Park" property near Forbes, where he finished vast numbers of cattle and sheep to load on rail for the Sydney markets.

Like another shrewd dealer, Sir Sidney Kidman, he liked to buy properties stocked and sell them bare, and the geographic spread of his holdings meant he could rely on always having sheep or cattle ready for market.

An accomplished horseman, J.J. was also a keen patron of the turf, and bred and raced a number of successful racehorses including Doncaster winners Sarcherie and Speciality, and Sydney Cup winner Akuna.

Gerard, for his part, first worked for his father on "Mt Oban" before moving to "The Burra" at Tumbarumba in 1951 to help his brother Pat with a pasture improvement program then getting under way.

But within 12 months a family crisis had erupted which Gerard chronicles candidly in his book that resulted in a division of sibling loyalties, bitter court battles and the break-up of J.J's hard-won pastoral empire.

Out of that break-up, Gerard emerged with a 2550-hectare residual portion of "The Burra", where he settled with his wife Kath and raised a family, before selling the property in 1984 and retiring.

Now living at Wentworth Falls in the Blue Mountains, Gerard has spent much of the past decade working on his self-imposed assignment to research and place on record his family's cautionary story.

It's been a project sadly interrupted for him by the need to nurse his wife through a terminal illness, and even to undergo surgery as an organ donor himself in an attempt - unsuccessful, as it turned out - to save her.

He has dedicated the first volume of his work to her memory, and to their 56 years of happily married life.

The book follows the fortunes of not just his father, but of his other family members who were involved to varying degrees in different aspects of the business.

At its peak, the J.J. Leahy pastoral empire ran like a well-oiled machine, with J.J. himself always calling the shots and determining strategy, and the sons all playing their part according to their respective skills.

But while a business involving multiple family members can be extraordinarily successful and cost-efficient, it can also carry the seeds of its own destruction, once personality clashes emerge.

Gerard's book provides us with a rare and personal account of one such unravelling, at the same time filling an important gap in the recording of the nation's pastoral history.

The book is copiously illustrated with pictures of historical interest, and appendices.

n Shirtsleeves to Shirtsleeves in Two Generations (Part One) is available from the Rural Bookshop, $37.95 (including postage and handling).