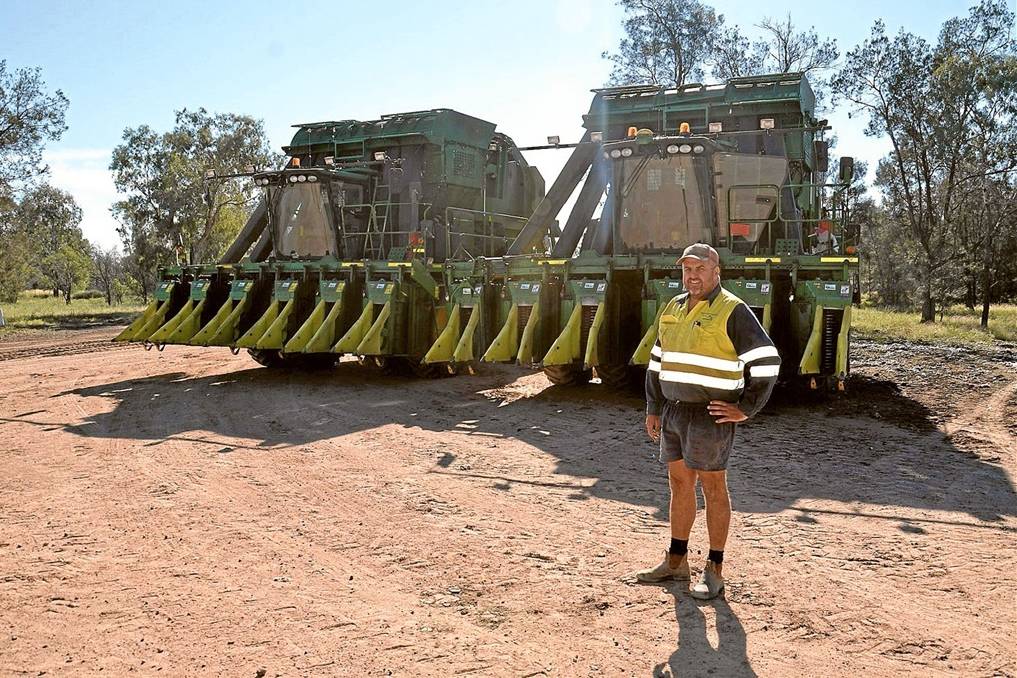 Manager at “Tarrawatta”, Mungundi, Mick Freeman, did three defoliation sprays on most of his cotton this season.

GOOD rain to kick off the winter crop season has caused a few extra challenges for those wrapping up their summer crop in the State’s north.

GOOD rain to kick off the winter crop season has caused a few extra challenges for those wrapping up their summer crop in the State’s north.

Cotton producers have had to budget for more defoliation sprays than usual.

B and W Rural agronomist Mick Brosnan, Mungindi, said 90 per cent of defoliated cotton in his area had three defoliation sprays, with some growers applying a fourth.

He said five seasons ago, growers would have only needed to do two defoliations.

Growers who received rain before the end of picking faced major delays as they were unable to traffic pickers through the fields.

With extra time in the ground and an increase in soil moisture, the cotton plants started to regrow their leaf, making it more difficult to defoliate.

As well as causing regrowth, he said it brought about cooler temperatures, which slowed defoliation.

“Once there was a bit of a shift in the temperature things changed,” he said.

“Basically, if the plants get moisture underneath them, they keep growing.”

In recent seasons, cotton growers have planted varieties that generate higher yields, meaning they are growing a larger plant with a larger canopy.

Mr Brosnan said planting varieties that grew higher yields was another reason why growers needed extra defoliation sprays, due to the large amount of leaf the plants produced.

“We’re chasing yields and to get higher yields you need more water and nitrogen and that’s made it more difficult to defoliate the plant,” Mr Brosnan said.

Aircair manager David Warburton, Moree, said defoliation was now the busiest time of year for spraying, but it never used to be the case.

He said the amount of defoliation sprays cotton crops require has steadily increased during the past four to five years.

Growers who started defoliating earlier in the season have been getting away with three or less sprays, but the crops left later have been pushed up to four.

“I would say the average would be over three, not quite four,” he said.

Mr Brosnan said in some cases, growers who applied an extra defoliation spray have still picked more leaf than what they would like.

Colour discounts, which can occur from leaf stain, have already been a significant problem for growers this season due to rainfall.

Mr Brosnan said growers who picked their cotton after the rain could have received up to $85 a bale discount.

“Large scale properties in the industry could have lost three million dollars just because of colour discounts,” he said.

Leaving the cotton in the sun to bleach out any colour the rain caused was an option for growers, although Mr Brosnan said there was always a risk of exposing the crop to more rain if it was left too long.

Extension and development agronomist Rob Eveleigh, Narrabri, said the main downside of the increased defoliation sprays was the extra time it took, but most crops in his area still only needed two passes, and sometimes three.

Cotton pick put back at Mungundi

MANAGER at “Tarrawatta”, Mungundi, Mick Freeman, did three defoliation sprays on most of his cotton this season.

Prior to the rain, he defoliated two fields efficiently with two sprays, but the rest of his 2100-hectare crop received three.

Mr Freeman said this was the second year he’d had to spray a third time, due mainly to rain right before picking.

“We’ve had two very similar years as far as climate and rain goes,” he said.

The cotton at “Tarrawatta” was grown on 30 millimetres of in-crop rain before it received 137.5mm at the end of March.

“Some paddocks were due to be picked and we had to wait two weeks before we could get the pickers in the field,” Mr Freeman said.

Because Mr Freeman was unable to pick the cotton straight away, the plants started to re-grow their leaf, making it necessary to apply an extra defoliation spray.

“It was an expense, but it was just what we had to do,” said Mr Freeman.

He said as much as 20 per cent of the crop was downgraded on colour.

“There’s been a few downgrades, but we’re probably better off than what some others appear to be around us.”