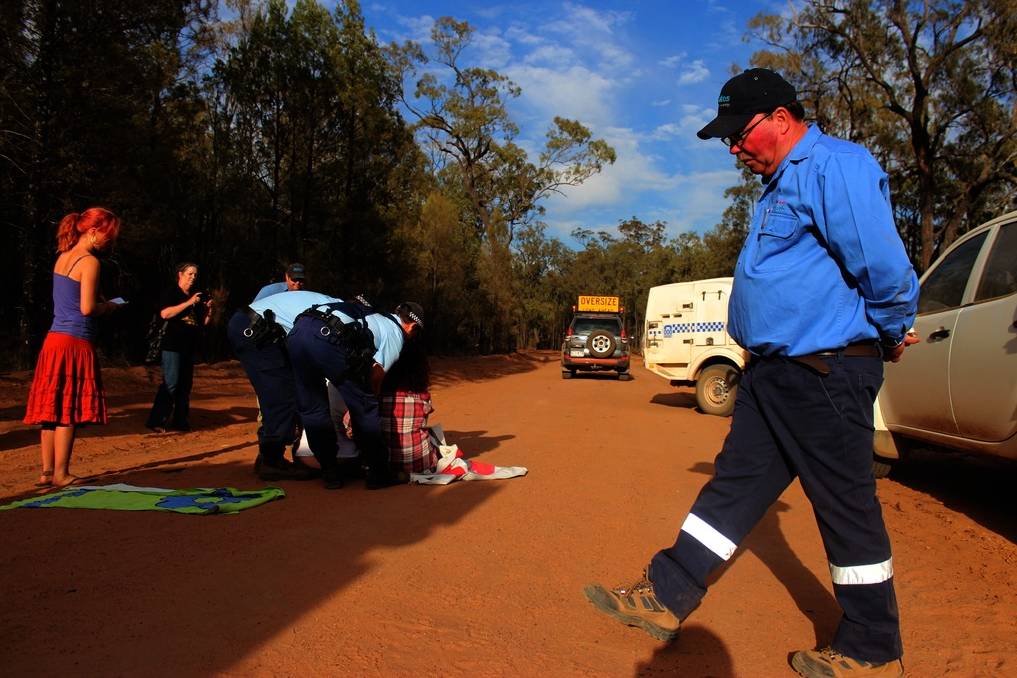 DEMONSTRATIONS continue against both Santos' coal seam gas exploration drilling in the Pilliga and Whitehaven's construction of the Maules Creek open cut coal mine in Leard State Forest.

DEMONSTRATIONS continue against both Santos' coal seam gas exploration drilling in the Pilliga and Whitehaven's construction of the Maules Creek open cut coal mine in Leard State Forest.

Protestors from across the State have converged on the district but the companies say operations are progressing largely unaffected.

This week, two women in their 40s were arrested for blocking access roads: Cherie Robinson from Coonamble Shire and Katherine Marchment, who had travelled from Victoria.

"I am very concerned about the impact of coal seam gas on groundwater resources, especially now, whilst my farm suffers the effects of severe water shortages as a result of the drought," Ms Robinson said.

Action at the Leard blockade has seen about 24 people arrested since action ramped up in December.

Attendance at the blockade has swelled to more than 100 on occasion and environment groups including Greenpeace and the Nature Conservation Council have weighed in.

Helicopter rides have been organised to view the scale of clearing for construction of the mine as access to the forest has been barred.

Third generation Maules Creek resident Rosalyn Druce has been involved in the protests.

She said the new mine had divided the community, with those who will work and supply the mine pitted against those concerned about environmental and agricultural impacts.

Maules Creek has received full approval from all levels of government.

However, like many of the protestors, this is not enough for Ms Druce.

She wants to "halt the bulldozing so the critically endangered white box (trees) is not destroyed and until it is proved there was not false and misleading information given to the government in Whitehaven's submissions."

Traditional owners, the Gomeroi people, say clearing for the mine will destroy sacred sites and burials.

They are petitioning government to halt construction to allow them to survey the forest.

The Gomeroi are demanding Federal Environment Minister Greg Hunt and State Planning Mininster Brad Hazard declare an emergency temporary protection stay of works until their application for permanent protection can be determined.