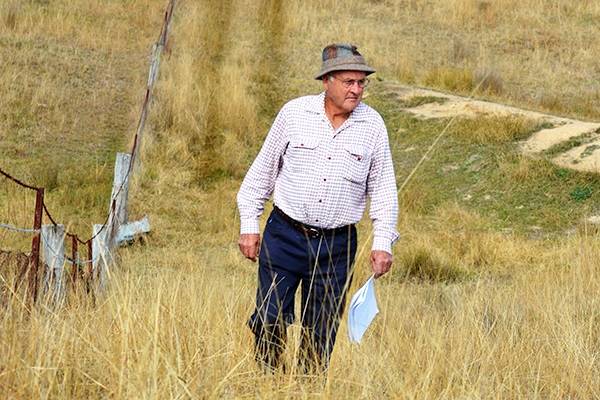 Ilford landholder Ian Moore, "Donasville", applied to close four Crown roads on the three properties he runs with his wife, Fay, and son, Deon, back in 2007.

LANDHOLDERS are being slugged with "exorbitant" fees and charges as the NSW government works its way through a backlog of applications to close thousands of so-called "paper roads" across the State.

LANDHOLDERS are being slugged with "exorbitant" fees and charges as the NSW government works its way through a backlog of applications to close thousands of so-called "paper roads" across the State.

The Crown road closure and disposal program - a hangover from the early 1800s when legal access had to be provided to the pastoral runs settled by squatters - was a reform of the Carr government and has been in place for almost a decade.

In many cases these roads have not been developed and last year Deputy Premier Andrew Stoner announced more people would be employed to deal with the backlog of applications, some of which date back to 2006-07.

Ilford landholder Ian Moore, "Donasville", applied to close four Crown roads on the three properties he runs with his wife Fay and son Deon back in 2007.

He only heard back from the State government in May this year, when he discovered he would also have to pay "associated fees and charges" of a minimum of $1620 per road, in addition to the actual cost of purchase.

Mr Moore believed it would cost him about $33,000 to buy back the 25 hectares of Crown roads on his properties, and said while he had the resources to make the purchase, others would struggle.

NSW Farmers Ilford district council chairman Mitchell Clapham said in some cases - given many roads only took up one to two hectares - landholders would pay close to $2000/ha just in fees.

"What we were told was you could put in an application to purchase your roads and it would be capped at the Valuer General's valuation at the time you lodged your application, which sounded good," he said.

"But there was no indication of what the costs would be... they weren't upfront.

"And that's the killer. It's just making it unpalatable for people to purchase roads."

Mr Clapham understood why the former Labor government made the decision to sell some Crown roads to landholders, as "the cost of administering the road closure permits was more than they were getting".

"NSW Farmers argued - as I did at the time - that they may as well give them to the property owners which the roads were closed in," he said.

Mr Clapham said there should just be one lot of fees where a landholder had several roads across different titles.

He labelled the system "unworkable".

"The amount of money they are requesting we pay to buy it back or transfer the title... is prohibitive so when it was presented to me I just laughed and put it in the bin," he said.

A Crown Lands spokesman said the government was currently in the process of working through some 6000 road closure applications.

"It is projected that the majority of the current existing closure applications will be processed within a four-year period due to increased resources being allocated to the program," he said.

"Purchase of roads within and adjacent to freehold property provides many benefits including: certainty of ownership, consolidation of holdings, no requirement for an enclosure permit or need to pay rent, use of the land for purposes other than grazing.

"Purchasers are offered flexible payment options for the purchase price; one payment (being the total price), or three equal annual instalments with the first instalment payable on acceptance of purchase price."