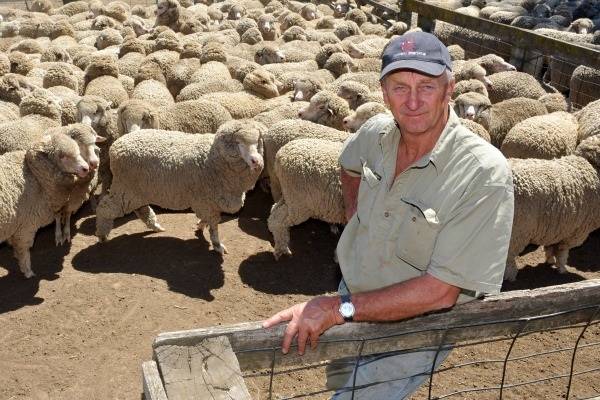 A CHANGE in the focus of their operation to a bigger-framed animal that cuts more wool has paid off for a Merino operation on the Southern Tablelands.

A CHANGE in the focus of their operation to a bigger-framed animal that cuts more wool has paid off for a Merino operation on the Southern Tablelands.

Ken and Freya Wolf, along with manager David Zouch, operate the Bigga-district property "Hollow Mount", trading as Peter and Ken Pastoral Company, and this year took out first place in the Crookwell flock ewe competition.

Mr Zouch said the operation had last entered the competition in 2008, and that after being approached to enter their top flock of Langdene-blood Merino ewes in the competition, they decided to give it a go again.

"It's great to go around and see what the other breeders are doing," he said.

"It's a great day for learning.

"The judges are always respected breeders or classers, so you take their comments on board."

Mr and Mrs Wolf have owned the 1214-hectare "Hollow Mount" since 2001, with Mr Zouch having managed the property for about 16 years.

Mr Zouch said the original Merino flock on the property had been based on Hillcreston bloodlines, producing superfine wool.

But with the premium for the finest end of the wool market not really present in the current market, Mr Zouch said they had to look at other options.

"The wool prices we were getting just weren't good enough to justify producing really fine wool, and when it came time to sell our surplus sheep they weren't big enough to generate demand from lamb breeders," he said.

"So we decided to move to a sheep that would cut more wool and had a bigger frame."

Rams from Sunnyview were then introduced to the flock, and in 2005 the operation had the opportunity to purchase 300 ewe lambs from the Georgiana Merino stud at Crookwell upon its dispersal.

These ewes were joined by some rams from the Thalabah stud at Laggan, as the Georgiana sheep were based on bloodlines from the Koonwarra stud before it was sold to the Curran family.

Then in 2008 rams from the Cox family's Langdene stud were introduced.

Mr Zouch said as he was a former stud Merino breeder himself, he travelled to many Merino sales and saw a lot of sheep.

"The Langdene sheep have been performing very well across the country for 10 years or so now, and I liked the sheep they were breeding, so we thought that would be a good way to go," Mr Zouch said.

Since then the operation has purchased a number of top rams from Langdene, including the top-priced rams at the stud's on-property sale in both 2010 and 2011, and the stud's top-priced ram at the Australian Sheep and Wool Show in Bendigo last year.

The "Hollow Mount" Merino flock is now run in three groups, with the best 800 ewes being joined to the top Langdene sires through both natural mating and AI, and it was the maiden ewes from this flock that were entered in the flock ewe competition.

Another 900 ewes are joined to Sunnyview and Thalaba rams, as well as Langdene-blood rams that have been bred in the operation.

Mr Zouch said the aim was to increase the size of the top flock, and gradually replace the second mob until the entire flock was of Langdene bloodlines.

A further 900 ewes were joined to Poll Dorset sires to produce prime lambs.

Mr Zouch said the average micron in the adult sheep was now 18.2, while the hoggets averaged 17.8-micron.

"We try to stay under 19.5-micron with any rams we buy, and we've been able to keep the micron down reasonably well while producing wool with a long, well-nourished staple," he said.

"It will take a bit of time for us to go that next step - you get your initial hybrid vigour from introducing new bloodlines, but then that dies out," he said.

With his stud background, Mr Zouch classes the sheep himself.

Even though they are looking to build the top line of ewes, Mr Zouch said he still classed out 30 per cent of each year's ewe lamb drop.

"To maintain a top-quality flock, you've still got to class out inferior stock each year," he said.

Two shearing periods are used on "Hollow Mount" each year, with one shearing taking place in May and another in October.

Mr Zouch said approximately half the flock was shorn in each period.

The two shearing periods allowed cashflow to be spread out more across the year, however it did make management of the sheep more of a challenge, Mr Zouch said.