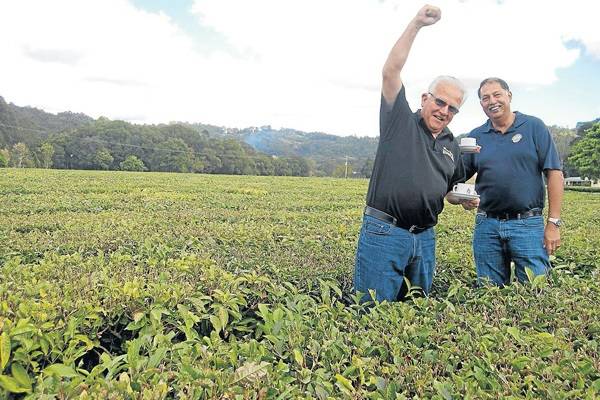 NOT only have they come up trumps against formidable overseas competition in the taste stakes but northern NSW tea estate Madura have possibly bagged one of Australian agriculture’s best export coups – selling tea to China.

NOT only have they come up trumps against formidable overseas competition in the taste stakes but northern NSW tea estate Madura have possibly bagged one of Australian agriculture’s best export coups – selling tea to China.

The Assam, or Indian variety, plantation, nestled amongst rainforest at Clothiers Creek, near Murwillumbah, turns off up to 17 tonnes of tea in a good year and blends with top-shelf imports to create more than 24 styles in loose leaf, tea bag and silk infuser.

Owned by four local families, Madura has just collected a national award for best tea bag, presented by ratings company Canstar Blue as a result of a survey of 2500 consumers.

Canstar Blue manager Rebecca Logan said 85 per cent of consumers surveyed were prepared to pay more for an item if it tasted good.

ether styles based on taste and maintaining the consistency of that flavour profile regardless of input costs, said director Gary Davey.

To that end, Madura has paid record prices on auction floors for its imported teas.

“We are one of very few tea operations that grow, blend and package, rather than just market, tea and that is important because we have complete control over the quality of our product and the sustainability of how it is farmed – both of which are bec-

Madura was Australia’s first subtropical tea plantation, established in the late 1970s by the Cook family, who had looked after tea estates in India.

It has continually pioneered production of Australian tea, and was the first to introduce an Australian green tea in the 1980s.

Today, with 250,000 tea bushes in production, around 1500 kilograms of main tea per hectare is produced, 90pc of which is sold domestically through supermarkets, although the label is now making inroads in the restaurant and food service trade.

The entire range, which includes traditional blends like English Break-

fast and Earl Grey through to its green tea infused with locally-grown lemon myrtle, is also available online, which Mr Davey said was a fast-growing market.

Madura now exports to the US, Middle East and has just sent a shipment to China.

Harvesting is continuous through spring, summer and autumn – about 18 rounds per year – and all drying, processing and packaging happens onsite, with 50 people employed by the company.

Technical manager for tea Michael Sales said the big challenge of sub-tropical tea production was that it wasreliant on mechanisation and excessive rain played havoc with the ability to harvest.

Quick-growing Assam varieties were chosen because they coped better with high humidity and warm conditions and were renowned for liquor strength, he said.

All Madura tea is produced pesticide-free and is naturally low in caffeine and teas imported for blending, from North Indian and Ceylon estates, are independently tested for purity and low caffeine range.

Madura is no stranger to awards, with a swag of medals from royal shows, fine food competitions and even excellence in business titles, but the Canstar win was extremely important, Mr Davey said.

“We are really the only larger-scale Australian-owned producer and marketer of teas left so to collect such an award against our overseas competitors, particularly based on taste, is important to us,” he said.