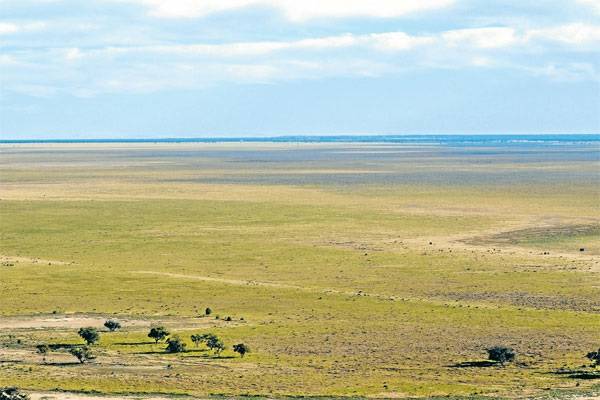 THE breathtaking expanse of the western floodplain on Toorale Station lies green and fertile as far as the eye can see.

THE breathtaking expanse of the western floodplain on Toorale Station lies green and fertile as far as the eye can see.

As the helicopter flies over what used to be one of the largest floodplain grazing properties in eastern Australia, sunlight glistens off the water still lying on the wetlands below, now used only as respite for flocks of birds, feral animals and occasional sheep missed when the property was cleared of stock after it was purchased by the Commonwealth and NSW governments for $23.75 million in 2008.

The impressive 2000-hectare irrigation area lies barren at a time when it would once have been lined with cotton modules.

The well-publicised intention of the purchase was to deliver water back to the Murray-Darling Basin, captured from dams along the Warrego River, which intersects with the mighty Darling on Toorale Station.

Almost four years later the dams along the Warrego are still intact, and with a federal election looming, the future of the 91,383ha "Toorale" remains unclear.

The NSW government - which is the minor stakeholder in the ownership of the property - is grappling with how to replace the roughly 10 per cent the asset contributed to the Bourke economy each year.

The State government last week announced a scenic driving route across the Darling River floodplain in a bid to increase tourism.

The situation infuriates former Bourke Shire mayor Wally Mitchell AM, who is adamant part of the 54,385ha State Conservation Area on "Toorale" should be leased or sold off and returned to agricultural productivity.

"It has to go back to agricultural productivity," he said.

"It's beautifully watered; all the troughs, tanks, fencing and yards are in wonderful condition. Rather than just having them deteriorate into nothing - being of no use to tourism either - they should be returned to productivity and sold off so people can then continue to support employment in the area and generate production we so badly need."

Member for Barwon Kevin Humphries was a vocal opponent of the purchase of Toorale in 2008 and said the State government was now open to the idea of parts of Toorale being grazed.

"It was a ridiculous purchase... it wasn't necessarily bought for the environment, they did no due diligence on this site. In fact, this property was bought virtually off a 20-minute inspection," Mr Humphries told The Land on "Toorale" last week.

"It was a whim of a decision. It was a highly political purchase."

Mr Humphries said the removal of the storages along the Warrego River would be "criminal".

"Over the last 100-plus years this area has defined itself as a unique ecosystem," he said.

"There is a 50,000 acre (20,000ha) floodplain that's supported not just a grazing enterprise but also a whole range of biodiversity outcomes, whether they are the plant, bird life or native fauna.

"To take (out the storages) would have just reverted the Warrego to nothing but a dish drain, there would have been no beneficial flooding and a whole ecosystem would have been pretty much annihilated in this part of the world."

The conservation values of "Toorale" were first formally recognised by the National Parks and Wildlife Service (NPWS) in 1983 when a large area of the property (49,190ha) was established as a Wildlife Refuge.

NPWS western director Mark Peacock is responsible for the management of Toorale and said since it was purchased eight aerial shoots had been undertaken, removing 10,182 feral pigs and 13,736 feral goats.

"The Australian people paid $23.75m for a property that, after they purchased it, did not deliver any water into the Murray-Darling Basin, it delivered water onto a floodplain," he said.

"I've got this old-fashioned idea of trying to get people to live in the western districts.

"Unless we're going to have a whole heap of ornithologists that reside in the precincts of Bourke, then the only way we can get the economy back into the western precincts is to make sure it is producing a product that the world wants; cotton."

State Environment Minister Robyn Parker - who toured Toorale Station with Mr Humphries last week - said she was not "closed-minded" to the potential for grazing on the property, but that it would need to satisfy "benchmark tests".

"I'm cognisant of the fact that (federal Environment Minister) Tony Burke overruled the Victorian government when they wanted to introduce Alpine grazing," she said.

"Toorale itself paid over four per cent of the total shire rates, so all other rural landholders had to pick up that cost," he said.

"The employment and cash flow that was generated on Toorale has in no way been replaced by its alternative use as a national park.

"Council is totally committed to increasing tourism but this has now been owned for four years and really there is not much tourism on it at this point, so every year there is another bit of slippage."

A federal Department of Environment spokesperson confirmed the government would spend about $4m to decommission parts of the irrigation infrastructure on Toorale Station, but that the timeline for these works was still "being negotiated with NSW".

"Planning for works on Toorale's Warrego River dams will take into account the needs for environmental watering of the western floodplain at Toorale," the department said, in a written statement to The Land.

The federal government remains opposed to grazing on Toorale Station.

"The Australian Government's agreement with NSW to assist with them purchasing the property is on the basis that all agricultural activity ceased, NSW are continuing work at Toorale in line with those funding conditions," the departmental spokesperson said.

The story Should 'Toorale' be returned to grazing? first appeared on Farm Online.