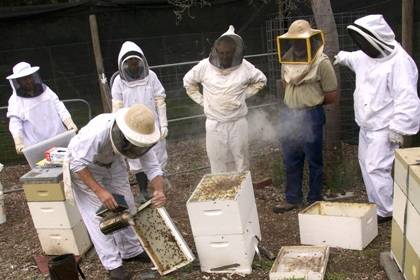 HOBBY beekeepers are proving their worth as part of the front line of biosecurity defence against major bee pests.

HOBBY beekeepers are proving their worth as part of the front line of biosecurity defence against major bee pests.

A pilot program called BeeForce has recently been expanded into Geelong after success around the Port of Melbourne, with the potential to eventually form part of a national system of surveillance. The project is funded by the Pollination Program and supported by the Victorian Department of Primary Industries.

Ports have been identified as one of the most likely entry points for bee pests such as the varoa mite, which has devastated bee colonies around the world. Australia is the last major country free of the pest, and with 65 per cent of our horticultural and agricultural crops requiring pollination, its arrival would cause devastation.

Gerald Martin, Chairman of the Pollination R&D Advisory Committee, said the pilot project in Melbourne with ten hobby bee keepers has worked exceptionally well, and another ten are now in place in Geelong.

“When Varroa mite was first reported in New Zealand in 2000 by a hobby beekeeper, it was already endemic and found to have likely been in the country for up to three years. The objective of BeeForce is to avoid a similar situation in Australia,” said Mr Martin.

“We literally have an army on the ground around the shipping ports of Melbourne and Geelong, complementing the National Sentinel Hive Program and similar programs designed to quickly find and identify both bees and pests that might come into the country.

“The project will be assessed to determine what it takes to make it work and if it can be implemented nationally. We are gathering detailed information on costs, level of engagement and commitment by participants, potential issues, as well as strengths and weaknesses.

“The beekeepers recruited in Geelong are very active with their local beekeeping club and are very aware of the importance of surveillance and early detection for varroa.

“If the mite reaches Australian shores and become entrenched it’s expected to cost $72.3 million per year over 30 years through loss of pollination by both managed and wild European honeybees on a range of fruits, vegetables and pastures,” said Mr Martin.

The story May the Beeforce be with you first appeared on Farm Online.