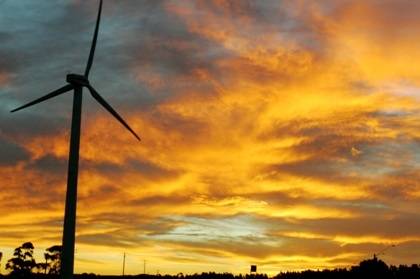 PROTECTING landholders who live near wind farms but receive no direct benefit from them will be among priorities for NSW Farmers in its submission to the State government on wind farms.

PROTECTING landholders who live near wind farms but receive no direct benefit from them will be among priorities for NSW Farmers in its submission to the State government on wind farms.

The State’s peak farmer body has welcomed draft guidelines on wind farms released by the government in late December and will take its own draft policy to an executive council meeting next month.

NSW Farmers president Fiona Simson said while a review of issues was welcome, clarity was needed.

Companies such as Origin – which has a big stake in NSW wind farms having purchased projects including Cullerin Range, Conroy’s Gap, Yass Valley and Snowy Plains from Epuron – want consistency, certainty and clearly defined protocols, along with effective stakeholder management.

And that’s exactly what NSW Farmers is seeking.

“We’re hearing numerous concerns from members, mostly from people who are affected by wind farms or proposed wind farms, and it is good the government is looking at this – a proper, upfront process is far better than fixing things afterwards,” Mrs Simson said.

“Some of the problems we are hearing about would seem not to have come about if there had been proper consultation.”

Planning Minister Brad Hazzard said the draft guidelines, which are up for public comment until March 14, struck a balance between encouraging investment and ensuring communities were protected from the impacts of wind farm developments.

“A central feature of the draft guidelines is a rigorous gateway assessment for wind farms where proposed turbines are located within two kilometres of existing residences,” Mr Hazzard said.

Without written consent from every resident within 2km of a proposed wind turbine, the “gateway process” is triggered, where the wind farm operator must lodge an application to a Joint Regional Planning Panel (JRPP) addressing concerns about noise, visual impact, any impact on land values, as well as other issues.

The plan would force NSW wind farms to be some of the quietest developed at under 35 decibels, compared with 40 decibels in Victoria, South Australia, New Zealand and Europe, and 50 decibels in the United States.

However, the NSW Opposition said the guidelines would “decimate” the industry, and The Greens claim slowing wind turbine development would mean more coal seam gas projects.

“NSW is abandoning the most cost-effective option for reducing its carbon footprint, which in effect means it is giving the green light for coal seam gas projects across the State,” said Greens planning spokesman David Shoebridge.

The Clean Energy Council’s Kane Thornton said the wind industry in Australia already faced some of “the strictest development guidelines of anywhere in the world”.

Mrs Simson said the “gateway process” on the 2km radius needed to be closely examined, and asked whether 2km was a sufficient setback distance.

She also wants to see tough rules on decommissioning.

“Wind farms have been phenomenally successful in Europe but there have been some problems with a large amount of disused turbines going into decay – what do you do with them?”

Another concern was protecting neighbours who received no benefit from wind turbines but could be impacted by them.

“We’d like to see the government do a little more work on the gateway process, but anything that requires the developer to consult with neighbours and the community is a good thing,” Ms Simson said.

“Compensation is not shared equitably, and another angle is planning, there are serious problems. But with predictions of a five-fold increase in wind turbines by 2020, we need to have a very good process in place.

“Most people are interested and would like to embrace wind energy but they need some guarantees their farm, lifestyle, and rural amenities will be preserved.”

The NSW Nature Conservation Council warned if guidelines were too restrictive, investment would be pushed interstate.

Friends of the Earth spokesman Cam Walker welcomed the government’s commitment that wind would be a major energy generator in NSW.

“While the guidelines are not as punitive as in Victoria, if this draft plan becomes law, there will be a number of worrying precedents which can be expected to negatively impact development,” Mr Walker said, adding setbacks should be measured in decibels rather than metres.

The story Farmers get wind of turbine trouble first appeared on Farm Online.