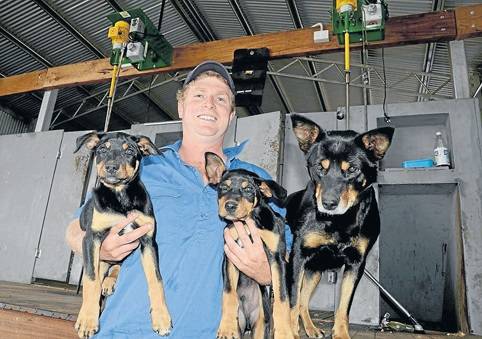 Lachlan Charlton with two pups bound for Scotland in January, while their grandmother, Kingarra Sophie, looks on in the “Cedar Park” woolshed, Ballimore.

LACHLAN Charlton might not have brought back the winner’s trophy from last month’s World Young Shepherd’s Challenge in New Zealand, but he did return with an export order for two pups from his Charlie Kelpie stud at Ballimore near Dubbo.

LACHLAN Charlton might not have brought back the winner’s trophy from last month’s World Young Shepherd’s Challenge in New Zealand, but he did return with an export order for two pups from his Charlie Kelpie stud at Ballimore near Dubbo.

Mr Charlton was one of two Australian competitors at the first world challenge held at Oamaru.

The competition originated from the International Sheepmeat Forum in Brussels in 2009, where delegates identified a link between rugby-playing countries and sheep production and came up with the idea of running this event on the back of New Zealand hosting the Rugby World Cup.

The challenge was contested by 22 competitors, aged 18 to 25, from 11 countries including France, England, Wales, Scotland, Uruguay and Argentina.

While the New Zealand team won the event, the two Australian entrants selected by Meat and Livestock Australia – Mr Charlton and Tasmanian James Downey, now an agricultural consultant at Rockhampton, Queensland – gave them a run for their money with Mr Charlton, aged 25, placing third overall.

He was also declared the “top” shearer based on speed and quality.

Now back home at Ballimore, Mr Charlton is helping his parents Tony and Kate with the last of the harvest on the family’s 1200-hectare mixed farming operation.

He’s also busy preparing two pups for export to Scotland where they will find a new home with one of the shepherd challenge’s Scottish competitors.

The litter are sons of Kingarra Archie from the homebred Charlie Sally, a daughter of Kingarra Sophie.

The pups must wait until next month for their vaccinations and a passport to the British Isles.

They will be air-shipped to Edinburgh in January.

How to select top pups, see our working dog column in The Land Classifieds.