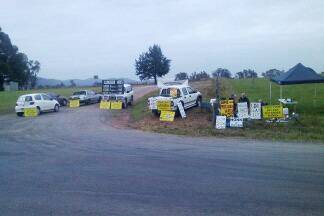 First light at the Gloucester blockade.

GLOUCESTER landholders and residents have launched a blockade to stop AGL from putting a coal seam gas (CSG) drill rig into place, angry that the company has approval to to proceed with 110 gas wells.

GLOUCESTER landholders and residents have launched a blockade to stop AGL from putting a coal seam gas (CSG) drill rig into place, angry that the company has approval to proceed with 110 gas wells.

The blockade at the intersection of Jacks Road and Maslens Lane kicked off on Monday afternoon and is growing in size today.

Barrington-Gloucester-Stroud Preservation Alliance spokesperson Graeme Healy said AGL’s 330 well coal seam gas project was approved in the last days of the previous government, despite the fact that no independent study of groundwater hydrology had been undertaken.

“The Gloucester-Stroud Valley is particularly vulnerable to environmental damage by gas extraction because its complex pattern of geological faults and shears creates an exceptionally high risk of gas migration and water table damage,” Mr Healy said.

“There are inquiries into coal seam gas extraction at both a state and federal level and increasing calls for caution from independent experts. And yet, here in Gloucester it is still full steam ahead.

“We are blockading the road to stop AGL from bringing in its drill rig and will maintain the blockade until the company agrees to defer further drilling until a fully independent study of the groundwater hydrology of the basin is completed,” he said.

“We have asked AGL to put the drilling on hold but they are determined to start drilling pilot production wells, despite local opposition.”

“We are deeply concerned that the proposed industrialisation of the valley will seriously harm or destroy its life-style and its economic base,” he said.

The Barrington-Gloucester-Stroud Preservation Alliance appealed against AGL’s plans in the Land and Environment Court and expects a decision to be handed down early next year.

"Drilling for coal seam gas is a gamble too big for the water reserves and rich farmland in the Gloucester-Stroud Valley,” she said.

"There has been no detailed water study of the Gloucester Basin, yet AGL wants to rush ahead with 110 production wells between Jacks Road and Craven.

"Blockades such as this and the recent Santos blockade should be a wake up call for state and federal governments that communities are ready to take direct action if the runaway expansion of CSG is allowed to continue.”

AGL says on its website the the Gloucester Gas Project, Petroleum Exploration Licence (PEL) 285, was approved in February by the independent NSW Planning Assessment Commission.

In a letter dated October 31 to local residents, AGL says it is “acutely aware of community sensitivity around our proposed operations” and provided details of two public consultation times at its Gloucester office.

AGL spokesman Nathan Vass said the company received approval for 110 production wells and had done comprehensive water assessments that showed there was no connectivity between the area where the wells were located and aquifers.

“We wouldn’t be involved in work like this if we thought it was going to hurt the environment,” Mr Vass told The Land.

“AGL respects people’s rights to protest and we understand some people in the community have concerns about the industry,” he said, outlining the company’s extensive local communication strategy.

“We just ask that protestors respect our right to go about our lawful activities in an orderly and safe manner.”

"The fact that AGL plans to drill 110 gas wells when a federal inquiry has called for a pause, and a state government inquiry into the CSG industry is underway is extraordinary,” Mrs Simson said.

"The actions of people in Gloucester demonstrate once again that we need state-wide strategic planning before mining and CSG industry development.

"That's why for the past year we've called for a pause on mining and CSG exploration and production licences while appropriate policy and legislation is brought into place."