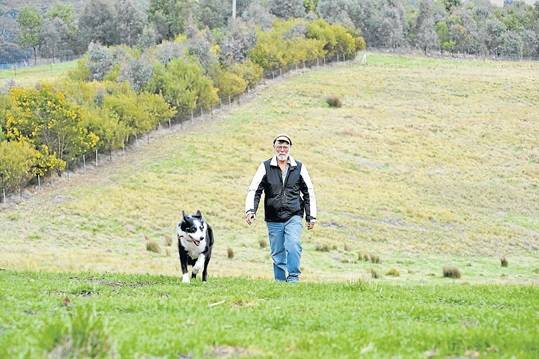 Yass grazier, John Ive, has discovered the benefits of fencing and grazing according to aspect, after implementing a 12-point farm plan initiated more than 30 years ago.

THERE is money to be saved in fertiliser costs and to be made in better grazing management through knowing the effects of soil depth, water holding capacity and slope aspect, according to a study started in 2001 by NSW Department of Primary Industries (DPI) Bathurst district agronomist, Dr Belinda Hackney.

THERE is money to be saved in fertiliser costs and to be made in better grazing management through knowing the effects of soil depth, water holding capacity and slope aspect, according to a study started in 2001 by NSW Department of Primary Industries (DPI) Bathurst district agronomist, Dr Belinda Hackney.

The study highlighted how aspects of slope affects the microclimate, solar radiation, moisture and temperature, as well as botanical composition and how paddocks are used by livestock.

Speaking last month at The Grasslands Society of NSW forum, she said the outcomes raised some questions about what it meant for how fertilisers were applied and pastures were grazed.

Such differences had significant effects on pasture growth, as well as moisture and fertiliser retention and utilisation.

She said soil temperature needed to be at 10 degrees Celsius or warmer for effective growth to occur, and in some study locations the south facing slopes were below this level for long periods during winter, which led to significant variations in the rate of pasture growth across paddocks where big variations in aspect occurred.

“You need 260 growing degree days for grass leaf production (ie, 26 days with the soil at 10 degrees C or more). Some areas don’t achieve this for large parts of winter,” she said.

It was essential a good legume component be present in the grass-based pasture to ensure there was capacity to respond to applied phosphorus.

The nitrogen fixed by the legumes could then be used by other pasture components such as perennial grasses to improve productivity.

Understanding the soil depth and water holding capacity was also important, as some positions on the slope had poor moisture retention due to shallow or coarse textured soils.

With the dry autumns that had been typical in many areas, this meant there was no phosphorous response in some parts of the paddock because the soil dried quickly, resulting in failure of annual legumes to successfully regenerate and therefore the capacity of the pasture to respond to applied phosphorus was limited.

This had implications for return on fertiliser applications, as well as for the success of germinating pastures, as the shallower the soil, the sooner it reached wilting point, which reduced the ability for new pastures to establish and the pasture’s capacity to use fertiliser.

Add to this increased solar radiation load and temperature for a north facing slope, which in turn increases evaporation and evapotranspiration, and it could mean certain parts of the paddock were only costing money to fertilise and the money or fertiliser could be better used elsewhere, Dr Hackney said.

Across the study’s four testing locations, which each had rates from zero kilograms a hectare of phosphorous to 80kg/ha, only three showed a response.

Most of the response was in spring, but in autumn it was the southern aspect slopes which had the best productivity, driven mainly by legume response and thought to be helped by the lower evaporation, hence better moisture availability for growth.

“People will often look at the bad areas of the paddock and try to lift the average,” she said.

However, the trial found to lift the lowest performing areas of the paddock to that of the average was unsustainable when the effects on gross margin were examined.

Adding to this, the study also demonstrated the best fertiliser response areas (south-facing slopes) were also the least grazed.

It was thought the livestock were favouring the sunnier slopes because they were warmer.

By the time the feed was eaten there, the south-facing slopes’ pasture was rank and therefore less enticing to the stock.

For these reasons, Dr Hackney said fencing paddocks according to aspect and slope could help better use pasture and fertilising regimes could also be applied accordingly.

“When trying to lift production, it can be cost effective to target areas of the farm where the biggest phosphorous response will occur,” she said.

It could also be worthwhile to cease fertiliser applications where no response would occur, which could become a more important strategy as fertiliser prices continued to rise.