COOTAMUNDRA abattoir G.M. Scott has been granted a full export licence, expanding its potential overseas markets from 18 to 148. 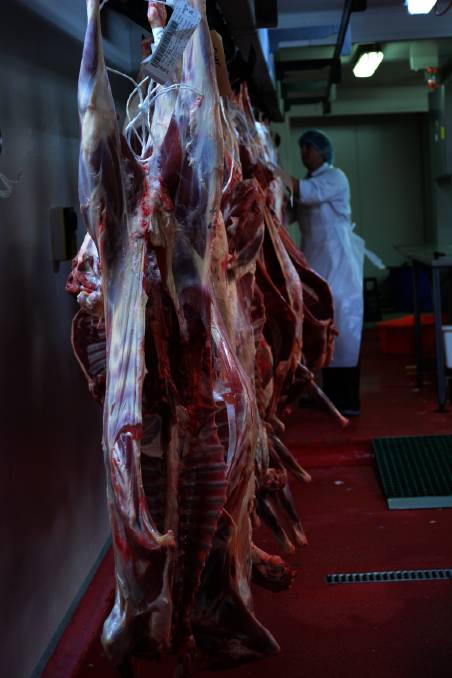 In the chillers at G.M. Scott Abattoir, Cootamundra.

COOTAMUNDRA abattoir G.M. Scott has been granted a full export licence, expanding its potential overseas markets from 18 to 148.

Production will start under a full export licence as of this month, according to business manager Bill Scott.

"This licence opens up the world to the marketing arm at G.M. Scott and to the local growers close by," Mr Scott said.

The US is also on its radar and a recent trip to China opened Mr Scott's eyes to the demand for Australian protein in Asia.

"There are 20 million people joining the middle class in China each year and they're all wanting protein that has been produced safely, creating a perfect opportunity for Australian meat," he said.

"It's a market we'd like to have down the track - China took over the Middle East last year as (Australia's) biggest market for lamb and sheep meat."

The Cootamundra works currently had a 70 per cent service kill, of which the biggest operator was Woolworths.

Most prime lambs were sourced within 100 kilometres, Mr Scott said.

The remaining 30pc was held by the current export job.

"Our export meat goes to the Middle East; they're lighter lambs and most are either local or from the New England area," he said.

"There's a good base for supply of trade lambs from prime lamb growers in our area, particularly for Woolworths."

Mr Scott said the abattoir answered to supply and demand and adjusted its plans accordingly.

"Earlier in the year we had a good market for mutton into the Middle East, however recently this market has not viable to produce for," he said.

"With regard to trade lambs when the market is about the 520 cents a kilogram mark it's pretty good for everybody, even the consumer is happy with that level.

"When they get up over the 600c/kg mark the consumer moves to other proteins, like chicken, and it takes a fair price drop to get them back eating lamb."

The abattoir opened in the 1980s and this week it has had a change in ownership to the Manildra Group.

Despite news another works will open 50km up the road at Young, Mr Scott is confident in their supply.

"In the past 20 years there's been a massive consolidation with abattoirs but we just keep focused on us," Mr Scott said.

"We're competing with abattoirs as far as Victoria and Queensland in every livestock market we enter."