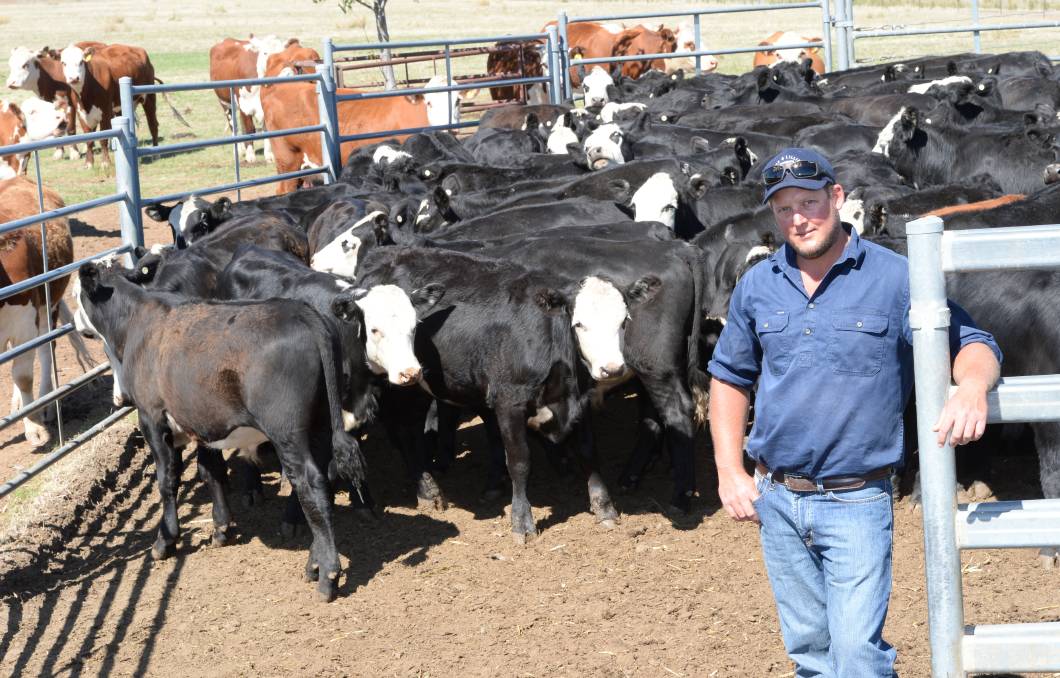 James Douglas, "Waverley Run", Big Springs, drafting his latest run of steer weaners after his success in the Feedback Trial.

“I was quite surprised our results,” he said.

“I thought they looked good when they entered the feedlot, but you never know how they will turn out compared to the other cattle.

“Coming tenth was a bonus.”

Mr Douglas, who operates the 2830 hectare aggregation based at “Waverley Run”, Big Springs, east of Wagga Wagga with his wife Jacinda, said he entered his team of black baldy steers on the suggestion of his father, Les who has the neighbouring “Cheviot Hills” property.

“Dad said, why don’t we put a team in to see how they will go, so he entered his Hereford steers, and I put my black baldies in,” he said.

Mr Douglas said he thought it a good idea, to not only get some analysis of the performance of his stock under grain fed conditions, but if in fact, the cattle he is breeding are producing carcases are meeting the elite brand requirements efficiently.

“I entered to give me an idea of where I was heading, to assess the value of our carcases compared with other breeders,” he reflected.

“And to see what I need to improve in my breeding program.”

Mr Douglas has been at “Waverley Run”, for four years, joining 800 cows annually in a split autumn/spring calving with sheep complementing the cattle operation.

The steer progeny are grown out on improved pasture and supplementary fed hay to reach 400kg before sending them to feedlots.

The calving is split to ease the workload, and to make better use of my bulls.

The cow herd is split 50/50 Herefords and Angus with replacement Hereford bulls bought from Yaven Vale while Angus bulls are purchased from Irelands Angus.

Mr Douglas said he meets the market when buying his annual draft of replacement sires, but admits to purchasing the best bulls I can get out of the top selection “without going overboard”.

He started with Herefords and has stayed with them because of their temperament, and ability to always finish well through various seasons.

“I’ve seen my Hereford cow herd lift enormously in the past four years through the use of Yaven Vale bulls,” he said.

He introduced Angus bulls “because that is where the money is”.

The Hereford heifers are joined to Angus, and Mr Douglas said all the black baldy progeny always sell well.

When assessing potential replacement sires, Mr Douglas said they have be “structurally sound”, and he looks at the 200 and 400 day growth figures, the fat cover and the Eye Muscle Area.

“I want the index to be as high as I can reasonably afford,” he said.

When classing his heifers, Mr Douglas said joining weight of 330kgs is the benchmark, and the heifers must have sound feet because his country is undulating and they need to go where the feed is.

He is also strict on milking ability and ease of calving, and the Herefords must have eye pigmentation.

Reflecting on the feedback information, Mr Douglas said he will be culling a bit heavier in the future to lift the overall standard of his cow herd.

“Now we have built up our numbers, I can go a bit harder and clean up the bottom end,” he said.

The results confirm Mr Douglas’s ambition to produce elite beef, and he will continue to “fine tune” his breeding and management program, lifting the standard of his bulls as he can afford them and culling his heifers to a higher standard.

He also said it will be interesting to follow the various bloodlines through, and see if there were any outstanding genetic sources, or was his success simply the result of his particular hybrid cross.

“I will enter a team next year to make sure we are the right track,” Mr Douglas said.

“We got really good information we can now use to select bulls with indexes to help us increase our productivity.

“After this trial, we should be rewarded with a premium for the production of elite and efficiently produced carcases!”