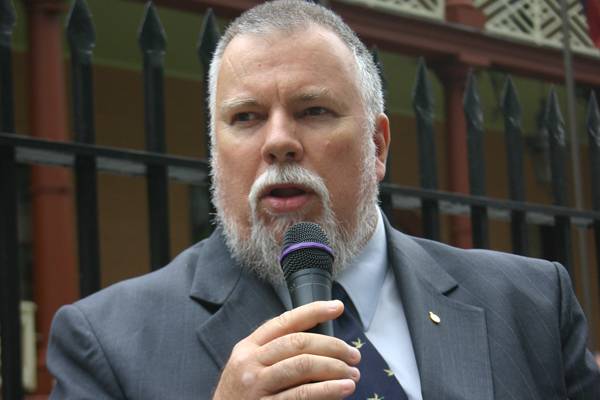 NSW Shooters, Fishers and Farmers party Member of the Legislative Council Robert Brown says fossil fuel's opponents are using farmers as a stalking horse in their fight against mining.

NSW Shooters and Fishers have been called to justify adding ‘Farmers’ to their party name after backing tougher protest laws set to be introduced to NSW parliament by the government tomorrow.

Landholder group Lock the Gate fired a shot across the across the Shooters’ bow today, with a statement that included targeted comments from hunters and farmers.

“We can’t believe that a party that has just decided to call itself the ‘farmers’ party would hang landholders out to dry like this."

He said the Shooters should vote the laws down and forecast the changes to hinder recreational hunters.

“It means that operating gasfields will effectively become off-limits to hunting, because of the risks that they could be accused of hindering operations,” Mr Nielsen said.

“Hunters will also become subject to random search and seize powers that would make a regular day out a very difficult process indeed.”

NSW Shooters and Fishers MP Robert Brown said the bill was “anti law-breaker” and not anti-farmer.

He said his party’s support hinged on a belief in “absolute property rights” for all landowners, including coal companies.

"We support a farmer’s right to say no to mining activity on their property," Mr Brown said.

"Lock your own gate by all means. But by the same token we don’t agree that you can then go down the road and disrupt someone else."

Mr Brown accused The Greens and Lock the Gate of using farmers as a stalking horse in their fight against mining.

"I bet half those farmers who are locking on to machinery wouldn't like animal activists coming and doing the same to them."

North-west peanut and potato farmer, Sarah Ciesolka, said the proposed changes would put “basic freedoms on our properties and in our regions at risk”.

“This is a test as to whether the Shooters Party will be a voice for farmers and landholders, or whether they are just a rubber stamp for the NSW Government and their CSG agenda in the Upper House of Parliament” she said.

Labors Resources spokesman Adam Searle said he would look carefully at any proposal but flagged his scepticism over the proposed changes.

“After losing the community debate, the Premier and his minister are just playing politics on this issue,” he said.

“(Labor) will not attack genuine community protesters who are standing up for their families and communities.”