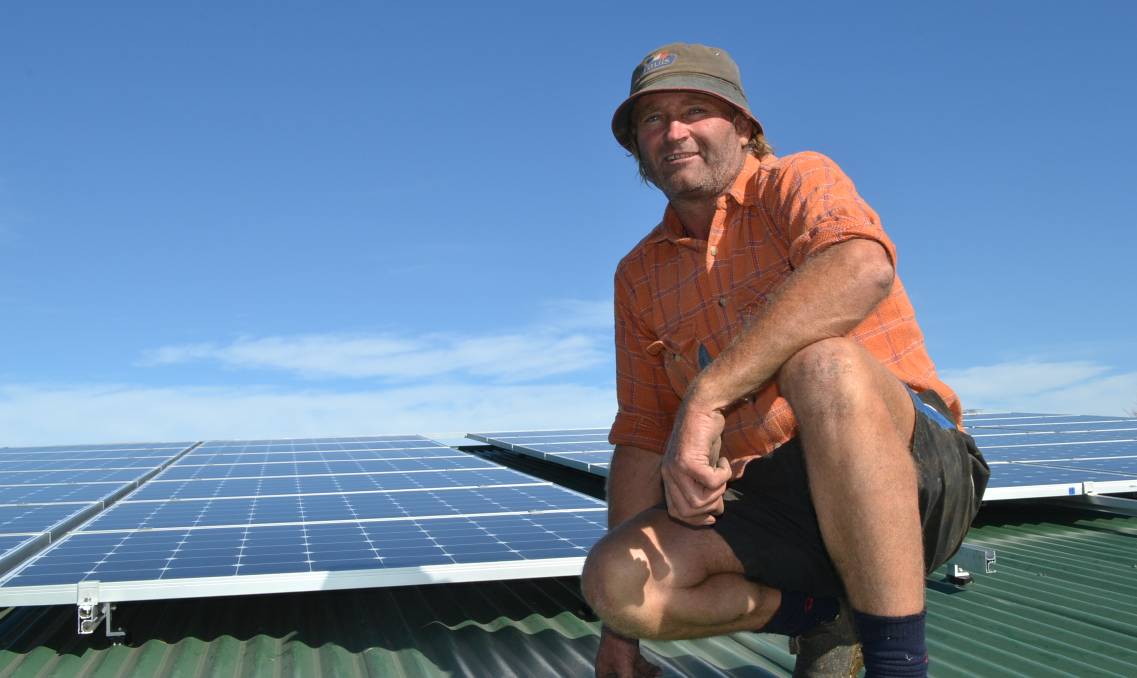 Nowra dairy farmer Keith Anderson said he is looking forward to a drop in his annual energy bill after getting a 30kW community-funded solar system installed this week.

Farmers are turning to community energy projects for a bottom-line boost.

MORE farmers are powering up - and hoping to fatten their wallets - by hosting community-funded clean energy projects that can slash electricity bills and free up cash elsewhere on farm.

Rural towns are apparently reaping the rewards too, with regional clean energy investors getting a return on solar, wind, and biofuel systems being fitted on farmers’ properties, while local contractors are getting the work to fit them.

The idea of community power projects is not new - but more are buying in to the concept.

And, with a bit of government attention - and by unravelling the crowdfunding red tape - Ms Ison says the rewards can only get richer for regional Australia.

“It’s still new, it’s still bloody hard, but the benefits are all there - it just needs to be made easier for investors, the businesses, and the community groups pulling it all together,” Ms Ison said.

Ms Ison and the CPA lobbies for and guides 70 Community Power Organisations (CPO’s) across the country.

There are 31 CPO’s in NSW, including 22 in regional areas.

Each CPO draws from their own pool of investors to fund sustainable energy projects on regional businesses, such as farms.

Businesses deemed suitable by the CPOs - usually enterprises with intensive year-round electricity use such as piggeries, dairies, or hotels - earn savings from producing their own green energy - while using the cash that would have gone to buying and installing the system for more pressing needs.

The initial cost of the systems is borne by the CPO’s pool of investors, who currently get about a 7 per cent return on their up-front outlay via the kilowatt hours produced, which, in some cases, has seen a break-even scenario within four years of a project’s 10 to 15-year contract.

Once the contract is finished, the business or producer gets to keep the generator for free.

We’re hoping for $8000 off our bill. And we can use the money we would have used on the panels for other things - Keith Anderson, Anderson Dairy Farm, Nowra

Solar community power projects have sprung up at businesses across the Central West and New England. Dairy farmers on the South Coast are now starting to get a piece of the action.

Nowra dairy farmer Keith Anderson said he is looking forward to an $8000 drop in his annual energy bill after getting a community-funded 30kW roof-mounted solar photovoltaic (PV) system installed this week.

Mr Anderson, who runs Anderson Dairy Farm with his brother Paul at Numbaa, said the seed was planted when he met with Chris Cooper, president of not-for-profit CPO RePower Shoalhaven last year.

“We’ve got 240 cows who basically milk themselves - mostly during the day too,” Mr Anderson said.

Mr Anderson said 10-year contract for their solar system will give them power at a reduced rate - and he expects to shave a quarter off the bill each year.

“We’re hoping for $8000 off our bill. And we can use the money we would have used on the panels for other things.”

RePower Shoalhaven president Chris Cooper said the Anderson’s dairy was one of four projects it had organised from its $140,000 community investment pool, including a 100kW solar PV on the Shoalhaven Heads Bowling Club, a local bakery, and a signwriting business.

He said he more projects were in the pipeline, including othe South Coast dairies, though investment regulations slowed progress down.

Currently for projects to comply with ASIC’s small scale offering rules, the number of investors is limited to 20 in any 12 month period, meaning a substantial clean energy project is out of reach of anyone but the most wealthy.

Ms Ison says the key to growing the sector is in crowdfunding reform - and she is hopeful of progress.

She is also hopeful of convincing the Federal government to back the CPA’s Smart Energy Communities Campaign and hand over $150 million funding over forward estimates, plus $460 million over 10 years, to create a series of ‘community powerhouses’.

She said these powerhouses would provide technical and legal know-how as well as start-up funding to kick-start DIY clean energy projects across the country.

Community energy: how it can work for farmers