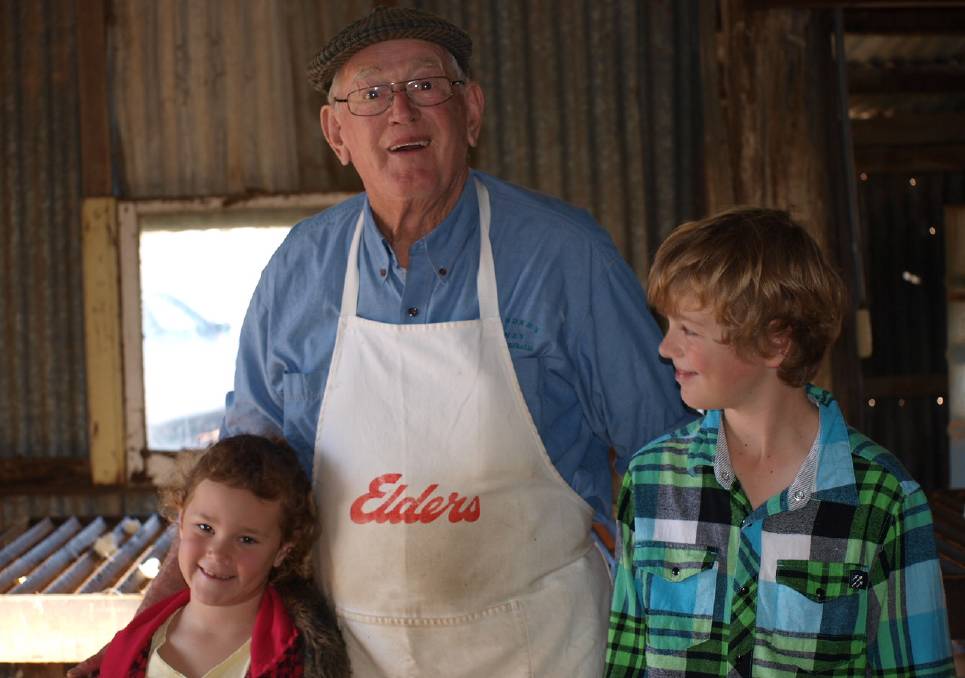 Affectionately known by his friends as ‘The Phantom’, the late Alan Curtis was remembered as a large character who made an enormous contribution to the wool industry and the Yerong Creek community.

The funeral of legendary Riverina-based wool classer,  Alan Desmond Curtis, who was born on 29 January 1929, was held at Yerong Creek on Monday 23 May 2016.

Affectionately known by his friends as ‘The Phantom’, Mr Curtis was remembered as a large character who made an enormous  contribution to the wool industry and the Yerong Creek community.

His nickname came from his uncanny ability to observe his staff without them being aware, and was thus able to have a quiet influence over their work habits.

Born in Melbourne,  Mr Curtis was two years-old when his father died and he was sent to live with extended family in Brocklesby so his mother (Ethel Kirwan) could return to work to support her family.

Mr Curtis moved to “Polygonwood”, Yerong Creek, when his mother remarried and he would call Yerong Creek home for nearly 75 years.

As a young lad, during a dry summer, he was contracted by a neighbour to cart water with a horse and a Furphy Cart from the government tank (dam), bucketing the water into the cart and then filling the trough for the sheep in the paddock.

This was the beginning of a life working on the land and valuing community participation.

“He was never afraid of the hard work and somehow managed to wrap a whole lot of fun and mischief into his life,” his son Roger recalls with affection.

“He made people laugh, he was a master storyteller, a brilliant sportsman playing AFL, rugby, cricket, golf, tennis and of course bowls.”

Working on the land in due course led Mr Curtis to seek a career as a wool classer.

Work all day on the farm, Mr Curtis would ride his horse ‘Sam” into Henty to attend wool classing classes and he was successful in obtaining his wool classing qualification, awarded the 22nd stencil issued.

By the time he was 18 Mr Curtis was travelling to woolsheds over most of NSW, Victoria, Tasmania and NZ and this routine continued during his long career.

“His ability to asses the quality of the wool with his hands was amazing,” his son Roger said.

“Wool buyers rated the top ten wool classer’s in Australia and Dad was in the top ten for most of his career.

“His stencil on a bale made it more valuable.”

The first shed in which Mr Curtis classed the wool was the community shearing shed at Yerong Creek, followed by the annual shearing at “Corawartha”, near Walbundrie owned by Horace Trethowan.

The shearing shed at “Wentworth”, Cookardinia, owned by Horace’s grandson David Trethowan, was the last in which Mr Curtis applied his number to the pressed bales before he retired.

Among many properties across southern NSW in which Mr Curtis classed the annual shearing, there were many significant properties which included “Bulls Run”, Wagga Wagga, “Caragabal”, West Wyalong and “Irish Lords”, Ivanhoe.

Besides his career in woolsheds, Mr Curtis was active in the Woolclasser’s Association, serving as President and Secretary at various times, and guiding it for many many years until it was taken over by the AWU.

Mr Curtis also spent time each year classing sheep and travelling to sales to help woolgrowers get the best from their flocks and improve their bloodlines and profitability.

His son Roger recalls his father was a hard task master in the shed and expected everyone to give their best and do the job right.

“This attitude resulted in quality product and reflected in the price that his stencil on a bale achieved,” he said.

“Working in the shearing shed under his gaze perfected his ability to assess people in an instant and giving them a nickname that summed up their character.

“Those nicknames seemed to stick and he would always use them rather than their real name.”

Immersing himself in the life of the village of Yerong Creek, Mr Curtis mowed nature strips, planted and watered trees, pushing for the local council to help make this small town a great one.

His son Roger recalls his father was on the committee that saw the first turf cricket pitch constructed in country NSW come to Yerong Creek, becoming the home of the Wagga Wagga district cricket finals for many years until Wagga Wagga had its own turf pitch built.

“Between sheds you would find him out on a tractor working up for seeding, building fences or getting a group together to cut wood so everyone would have their winter supplies,” he said.

“In among the hard physical work of these tasks there was a lot of teasing, story telling and laughter.

“Dad would take us for a drive around the district when we went home to visit and he would look at the crop and tell you how many bags to the acre a paddock was going to harvest.”

Apparently his predictions were usually close to the mark.

His son Roger Curtis said his father has been nominated  by David Trethowan for admission to “The Shearers Hall Of Fame” for his contribution to the wool industry in Australia.

“We are looking for more information and stories as to his involvement with the Grazcos Sheds and his terms as President and Secretary of “The Woolclassers Association”, Roger Curtis said.