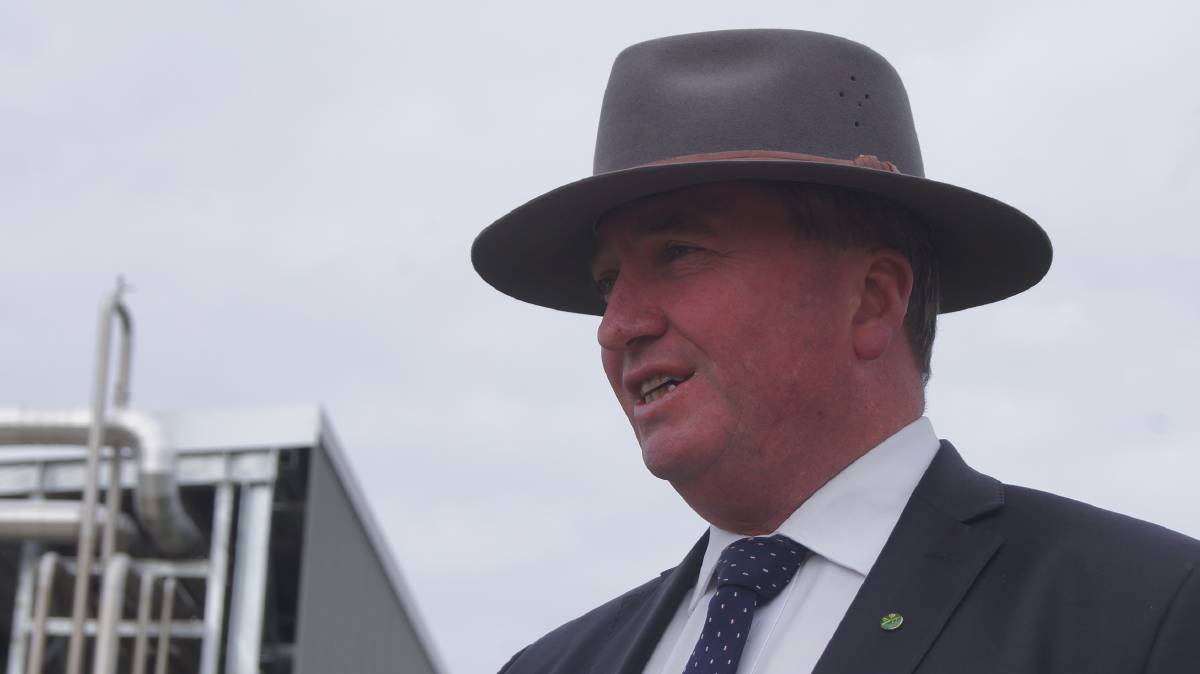 DEPUTY Prime Minister Barnaby Joyce has been defended by locals in his New England electorate after he was “harassed” by anti-mining activists last night at a local bar in a political ambush.

David Munsie told Fairfax Media he was drinking quietly with friends at the The Top Pub at Uralla in NSW last night when Mr Joyce stopped in.

He said when the Nationals leader entered the bar, they invited him over to their table to say hello, which he did obligingly.

But Mr Joyce was then approached by two ladies, he said, who entered from the nearby dining room which forced the situation to escalate rapidly.

Mr Munsie said the ladies approached Mr Joyce at “100 miles an hour” forcing him to believe initially that they were “fans” and “seemed cheerful”.

“But all of a sudden they turned on Barnaby and hounded him about coming to a meeting,” he said.

“Barnaby said it wasn’t the time or the place and told them that he’d already answered their questions on Q&A.

“He said, ‘please leave me alone’ but they kept on hounding him and were very aggressive.”

Mr Munsie said Mr Joyce then went to the bathroom but when he returned the two women “kept going” with their attack.

“In the end the bar staff had to intervene and remove the ladies sending them back to the dining room because they were making so much trouble.

“The people I was drinking with were just good local country people.

“No threats were made but if any swear words were exchanged it came from the locals because the two women would not leave or take no for an answer.

“I actually felt sorry for him (Mr Joyce) but the way he acted and handled himself was very good, in trying circumstances.”

One of the women involved in the incident Nicola Chirlian appeared on the ABC’s Q&A broadcast from Tamworth a couple of day before.

During the program, she asked Mr Joyce questions relating to the controversial Shenhua Watermark mine, while revealing statements made during a private meeting she had with him at Parliament House in Canberra in 2013.

She claimed to be a beef producer on the Liverpool Plains but has also made strong public statements against mining including supporting Greens political candidates for opposing gas and coal mining.

“Why should we vote for you if this is the best you can do to protect water and land into the future?” she asked Mr Joyce on Q&A.

Local members of the Nationals have also complained that they applied to be a member of the Q&A broadcast audience but were denied entry while others seemed to have been accepted, but were not necessarily from the local area. 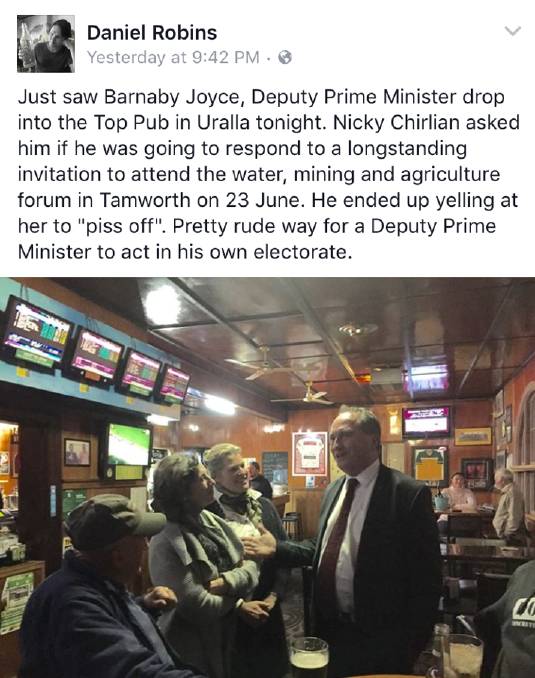 They also questioned the fairness of Mr Joyce facing his electoral rival Mr Windsor and his portfolio opponent in Canberra, Shadow Agriculture Minister Joel Fitzgibbon, during the live broadcast.

Mr Munsie said a picture taken of Mr Joyce talking to Ms Chirlian and the other woman involved in last night’s incident, posted on Facebook last night, was also “clearly a set-up”.

The post says Mr Joyce was asked to respond to a long-standing invitation to attend a water, agriculture and mining forum in Tamworth on June 23.

“He ended up yelling at her to ‘piss off’ - pretty rude way for a Deputy Prime Minister to act in his own electorate.”

But Mr Munsie said the photographer was conveniently placed, while the two women carried on badgering Mr Joyce.

He said he had no political connections and he and his friends would have acted the same, even if they saw Mr Windsor being hassled in the same way, while mingling with locals.

“It was just disgusting the way these two women carried on,” he said.

“This is not normal behaviour for people who live in our area.

“If these women have a political problem there are much better ways of handling it than harassing the local member - this was just disgusting.”

“I was talking to locals who invited me over to have a beer with them,” he said.

“I was approached by people who were persistent and badgering.

“I left to go to the bathroom and when I came back they were pestering the group.”

“Then bar staff intervened and asked her to leave the area.”

Ms Chirlian was accompanied by Megan Kuhn who also has links to anti-mining activities in the local area and has called on farmers and other community groups in areas outside New England, to join protests.

Other locals who witnessed the incident have spoken to Fairfax Media and confirmed Mr Joyce was being harassed by the two anti-mining activists.

Ms Chirlian accused Mr Joyce of saying, “Nicky piss off, just piss off, piss off'” and being physically intimidating during the exchange.

A Facebook post from April showed Ms Chirlian as one of two contacts to RSVP to an informal function to hear Mr Windsor discuss his election platform and for him to hear local issues.

“This is looking great - lots of rsvps from other sites/email links - look forward to seeing you tomorrow,” she posted on April 9.

Nicky Chirlian is also Chair of Upper Mooki Landcare Group and links to other anti-mining groups like Lock the Gate which were not declared on Q&A.