Understocking does not normally help a livestock producer’s bottom line, but increasing numbers of pastoral landholders are getting paid to reduce their carrying capacity. 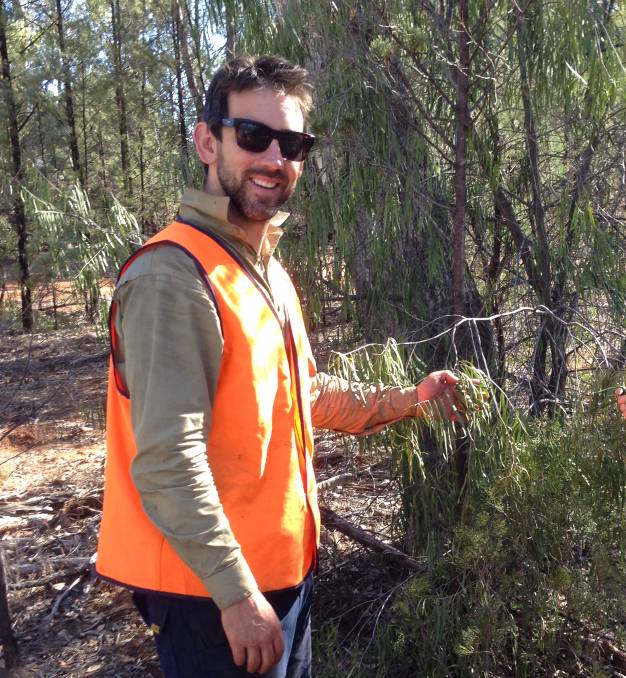 Climate Friendly's Australian projects manager, Josh Harris, in mulga woodland with reduced stocking numbers which he estimates will earn an average $1 million or more in carbon farming credits from Emissions Reduction Fund contracts during the next decade for landholders in pastoral regions.

Understocking does not normally help a livestock producer’s bottom line, but increasing numbers of pastoral landholders are getting paid to reduce their carrying capacity.

Strategic understocking and vegetation management has enabled these producers to tap into a decade-long income stream which even pays up in tough drought years.

They are cashing in on a national carbon farming program paying landholders who sign up to a vegetation management schedule which encourages woodland regrowth to sequester carbon on their land.

Livestock are still encouraged, but at a reduced grazing pressure.

Depending on the season, the property’s stock carrying capacity might be down 25 per cent to 50pc on conventional rates over specific land areas contracted to the carbon farming program.

“It’s basically a case of managing your land with fewer stock to encourage trees which absorb atmospheric carbon as they grow.”

Mr Harris said Climate Friendly’s current landholder clients would reap average returns of more than a $1 million in the next decade.

He said the 10-year guaranteed income stream was “virtually unheard of in farming”.

Not surprisingly, it was attractive to many rangeland landholders in areas typically averaging about 300 millimetres of rainfall a year.

Many of these more marginal production regions had endured below average rainfall and drought in recent seasons and would have cut stocking rates anyway.

Climate Friendly currently runs projects covering about 2m hectares, including indigenous holdings in the Top End where “cool burn” strategies have been approved for savanna management.

Mr Harris said landholders were spending their carbon payments from the federal government’s $2.55 billion fund on boosting property productivity through improved fencing and watering infrastructure or diversifying the farm enterprise.

“The scheme also allows families to initiate some succession planning strategies based on the knowledge of a guaranteed income opportunity they wouldn’t previously have been able to bank on,” Mr Harris said.

In the eastern Australian mulga belt, stretching south from about Charleville in western Queensland, the program has 112 contracts signed off in Queensland, 164 in NSW and 20 in Victoria.

Landholders in areas such as Cunnamulla, Thargomindah, Charleville, Enngonia, Bourke, Louth and Cobar in NSW and Queensland have been the most active participants.

The Northern Territory, South Australia and Western Australia have 13, 5 and 16 projects respectively.

Typically properties of 10,000 hectares or more in rangeland regions may be contracting about half their land area to earn between $10 and $14/ha annually from carbon credits.

Each hectare of woodland forest with trees under 20 years of age is likely to be absorbing about a tonne of carbon and earning one credit.

Woody weeds do not qualify as plants eligible for inclusion in the woodland sequestering program.

Contracts last 25 years and are subject to regular compliance monitoring.

They are allocated in a series “reverse auctions” in which approved farms submit tender bids.

The first $660m auction last year paid $13.95 for each credit, but the scheme’s growing popularity has made bidding more competitive, with the most recent credit price in May being $10.23.

The next auction is likely to conclude in November.

About $816m still remains to allocated to farming, waste management and energy efficiency projects from the ERF’s initial budget.

The federal government has been coy about what or when top up funds might be allocated to the ERF, but it has committed the fund to carbon abatement project support until 2030.

Last month by Environment Minister, Greg Hunt, said he believed the ERF would be a key part of Australia’s emission reduction framework “for decades to come’’.

Mr Harris said for many farmers the benefits of effectively being paid by polluters to have their land absorbing carbon were significant for the environment and the long-term business sustainability of their farm.

Farmers in drought-prone areas were earning a carbon farming revenue stream which offered income insurance and provided a form of budget breathing space in tough times.

“In other areas, carbon farming can fund business expansion or other investments,” he said.

Climate Friendly, established by a former CSIRO scientist 13 years ago, undertakes technical assessments on the suitability of potential carbon farming land, talking with farmers about their plans for their properties.

“There’s no upfront financial commitment required when farmers sign up – we get paid when they get paid,” Mr Harris said.