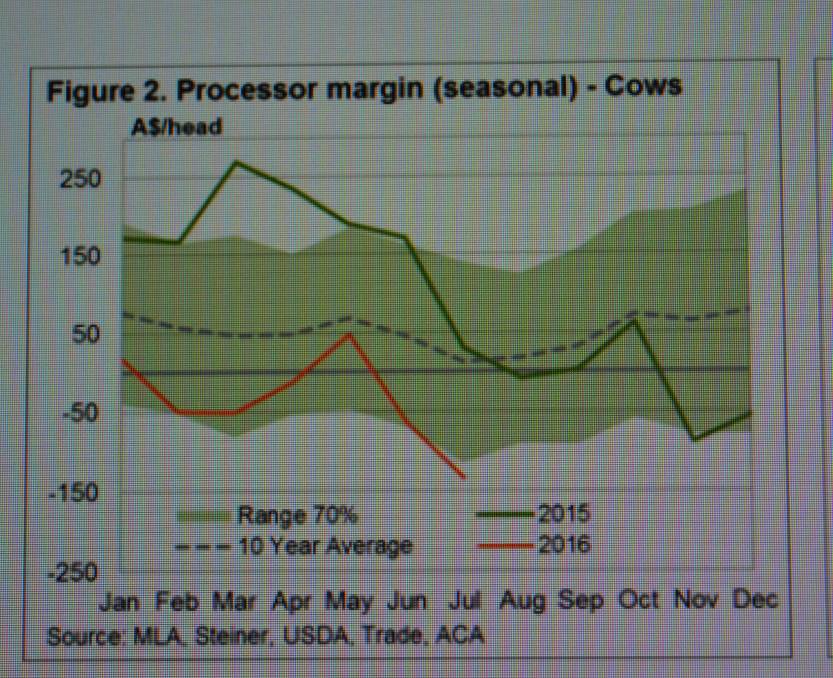 Mecardo's theoretical model on processor margins shows they have been mostly in negative territory this year.

SOME of the heftiest beef processing plant cutbacks since Australia’s great cattle shortage kicked in have been made this week and analysis is indicating there is more pain to come.

The country’s biggest player, JBS Australia, has stood down more than 100 workers at its Longford abattoir in Tasmania for at least six weeks, along with closing the day shift for one week at its Dinmore, Queensland, plant.

Workers have also been told Dinmore’s night shift next week has been shutdown, which equates to a 50 per cent capacity decrease for the fortnight.

The move affects at least a thousand workers, according to the Australian Meat Industry Employees Union, and takes the total days lost at that plant to 28 for the year.

Teys Australia has also stood down hundreds of employees at its Beenleigh, Queensland, plant, for one week, according to AMIEU.

Industry insiders say abattoirs at Biloela, Rockhampton,Toowoomba and Grantham are also about to be subject to significant shift cutbacks, however that has not been confirmed by owners.

JBS said unequivocally no full shutdowns were on the books and producers could still book cattle into all its processing facilities.

The company pointed to the drastic lack of livestock as underpinning the need to cut capacity.

In South Australia, cattle slaughter numbers were down a massive 47 per cent year-on-year.

Meat and Livestock Australia forecasts for a 7.4 million total slaughter for the year, an 18pc year-on-year decline, are on track.

It’s prediction is that figure will go even lower to 7m in 2017.

The mass shortage of cattle as Australia rebuilds it herd following years of drought-induced selling off is what is underpinning record prices.

Leading market analyst Matt Dalgleish, Mecardo, said higher slaughter numbers up until 2015 was driven by an increase in the turnoff of females and that was now reverting.

Mecardo has forecast the final female percentage of the slaughter for this year to stand at 46pc and drop to the low 40s next year.

Dairy cows being brought forward on account of tough milk pricing had kicked the percentage higher than expected this year, Mr Dalgleish said.

“The long term average for the female component of the slaughter is 48pc and when it drops below 45 that is indicative of a herd rebuild,” he said.

“For the second half of this year, the percentage of females is expected to really drop down and that will impact the numbers processors have to work with.”

Mecardo’s theoretical model of processor margins is currently sitting at negative $134 a head, compared to peaks of $270 in April last year.

For this year, it peaked at $50/head in May, following a drop in the Eastern Young Cattle Indicator to 545 cents per kilogram, but has been in negative territory far more than it has been in positive.

And 2017 would be equally tough on processor margins, he said.

One small bright spot on the horizon for processors is the increased ability producers now appear to have to keep cattle on and put more weight on them, thanks to good, widespread rain delivering feed to paddocks.

The availability of heavier stock should help reduce the competition from restockers and feedlotters.

Meatworkers also want government intervention to reduce competition from the live trade business on the grounds local jobs should be protected.

AMIEU’s Queensland assistant secretary Ian McLauchlan said ‘good luck to the grazier’ cashing in on the way the cattle market was currently skewed but the federal government needed to look at ‘leveling out the playing field’ for meatworks ‘or eventually Australia will have none.’

He said lost days were common across the Eastern Seaboard this year, with workers either having to take holiday pay or no pay, and one northern Queensland plant had shut down for four months.

Workers were being forced to leave the industry and in the long-run, that would significantly affect Australia’s ability to rebuild processing capacity.