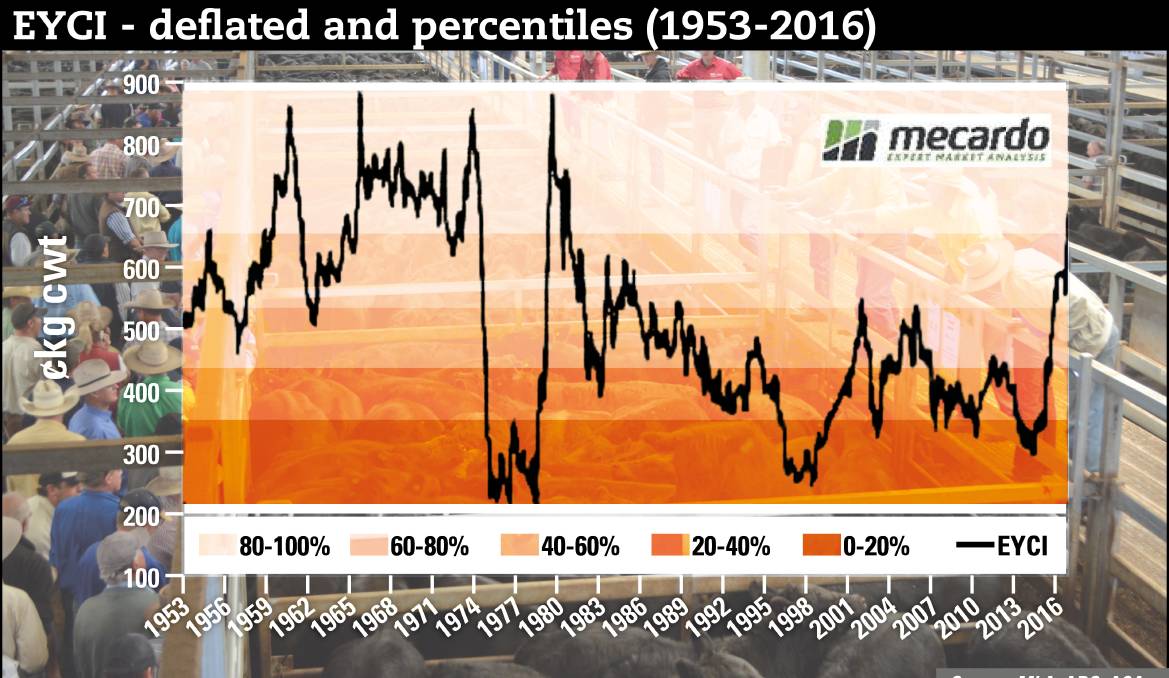 Cattle prices may have reached levels for which no superlative can measure up but in real terms, accounting for inflation, they’ve still not set a record.

CATTLE prices may have reached levels for which no superlative can measure up but in real terms, accounting for inflation, they’ve still not set a record.

Analysis by prominent livestock commentator Mecardo shows the EYCI would need to reach 885c/kg to equal the highs cattle prices achieved just before 1980 and in 1963.

However, prices, in deflated terms, have sat where they now are for only 12 per cent of time since 1953.

The long-term average has been 510c/kg deflated.

In recognition of the meteoric rise of the EYCI, which all but stopped the nation last week, Mecardo held an invitation-only webinar on Monday outlining extensive historical analysis on the market and what that means for where we are headed now.

Mecardo’s conclusion is that, based on what is happening overseas, the EYCI has probably reached its peak.

That has been seconded by a diverse spread of East Coast livestock agents and industry leaders, although most are quick to add they were proven wrong when they arrived at that same verdict a month ago.

Elders livestock sales manager Queensland Paul Holm said the heat in the market would have to ease soon.

The anticipation of cattle to come off oats in September should start to change the supply demand curve, he said.

The situation had taken the industry into uncharted territory in many ways, one of the more significant being how the East Coast’s processing capacity will look in the wash-up.

The degree of shift cutbacks at meatworks, who have been in negative profit margin territory most of this year on the back of the off-the-scale cost to buy stock, is getting worse each week.

“We may have had periods in the past when processors have been squeezed just as tightly but we not have had such a sustained negative period before,” Mr Holm said.

“While there are underlying factors in the short to medium term taking us outside the normal historical range, the long-term relationship between domestic and international prices suggests the EYCI is now at its peak,” analyst  Matt Dalgleish said.

It has been just seven months since the EYCI hit the 600c mark and Meat and Livestock Australia has identified restockers as the driving force of its bolt through the 600s during June and July.

Although, lotfeeders have clearly held their own, consistently accounting for 44pc of EYCI cattle purchases for the past four months.

“With lotfeeders, it is a three-way equation - cost of feed, cost of cattle and the price of beef,” he said.

“Feed is going to get cheaper and the meat price is going to be pretty strong - that adds up to good encouragement for buying cattle to put on feed.”

The big questions surround restocking, with economic analysis put forward by numerous respected consultants in the past week suggesting there is a real risk of losing money on 300kg steers bought on the current market.

Consultant John Francis, Director of Holmes Sackett, Wagga Wagga says it’s dangerous territory to start to trade steers if you think a 20pc reduction in the market is possible.

But there is a world outside the steer category.

“A lot of people think if you are a cattle trader, it’s steers you have to trade,” Mr Francis said.

“If you lock yourself into trading steers, you might be locking yourself out of where best opportunities exist.

“When feed is abundant, there is a good deal of opportunistic entering of the market, which ramps up competition and effectively means less potential in steers.

“Heifers, which usually trade at marginal disparity to steers, might now be a more attractive option or there might be value in PTIC (pregnancy tested in calf)  heifers or cows, or cows and calves - all should be put on the table at the moment.

“Or, assuming you have the infrastructure and land capability, maybe it’s sheep you should be looking at.”

Mr Hermann agrees with keeping an open mind about where the trading opportunities will exist under the new cattle market regime.

There was still plenty of heat left in the breeding cattle market, he said.

“And there are a lot of Merino wethers coming off in the Riverina that will present opportunity,” he said.