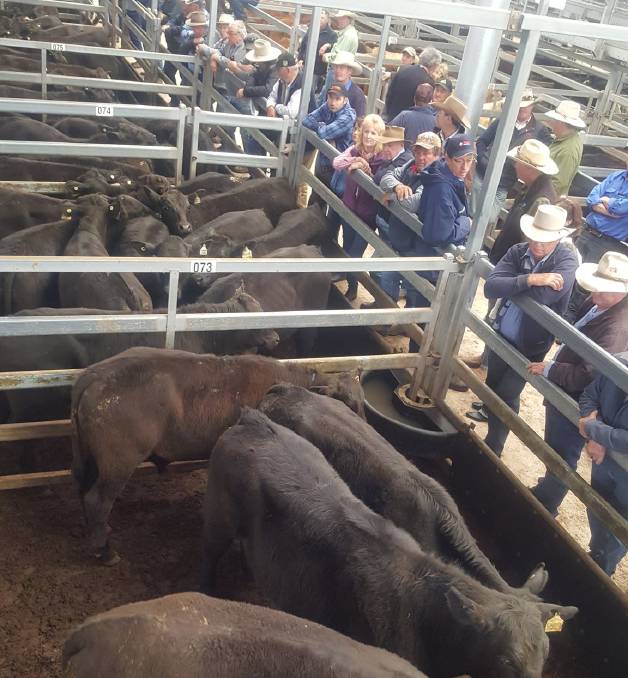 The 2100-head yarding included 1000 steers, 600 heifers, 300 cows with calves and 200 pregnancy-tested-in-calf (PTIC) females, with cattle coming from the Tamworth region.

Among the big lines of cattle were 100 cows with calves and 100 PTIC cows from NGD Enterprises, Bendemeer.

Agent Simon Burke, Burke and Smyth Tamworth, said prices were strong for all categories, but the biggest demand was for steers to finish on winter crops.

Lighter weaner heifers ranged from $550 to $800, heavier weaner heifers, weighing from 250kg to 320kg sold from $800 to $960 for six- to eight-month-old Charolais-cross weaners from Bruce Russell, “Brubri”, Manilla.

Cows and calves reached a new record for the Tamworth yards. selling from $1200 to $2850 for five- to eight-year-old Limousin-cross cows with calves from Angus and Limousin bulls and in calf to Limousin bulls.

Mr Burke said while there was some interest in the heavier young cattle from lotfeeders, restockers bought the majority of the yarding. He expected the market to remain firm for the next few months.

”There’s still a lot of demand for restocker cattle because we’ve got so much feed around, so I can’t see it getting any cheaper,” he said.

“We’re in one of the best springs we’ve seen in many years, and the future of the cattle industry is quite strong so people have got the confidence to pay a bit more for cattle, because there are good returns to be made.”