Young leaders look beyond the froth to the future.

FROTH and bubble floats around forecasts of the ag sector’s future like cattle prices hover at record highs. But will the excitement be justified in the bottom line?

It should be no surprise the mood was upbeat when 100 of the ‘best and brightest’ of the ag sector’s next generation discussed the sector’s prospects – all between 25 and 40 and picked by Rural Industries Research and Development Corporation for its GrowAg conference.

“The next Steve Jobs will be a farmer,” was how Westpac’s Xavier Rizos, leader of the bank’s business start up incubator The Garage, characterised the global opportunities that are washing up on Australia’s shores.

The sector’s current four per cent growth rate puts it at the top of the industrial tree Down Under and Australia should aspire to become the France of the Southern Hemisphere, Mr Rizos said.

But the pressing question for the nation, straining under the resources boom’s retreat and increasing urbanisation: Can the farm sector justify the excitement?

A hard-headed industry warhorse was on hand to lob a few truth bombs at the colts,

Geoff Daniel, managing director of Growth Farms, a livestock and cropping producer and management company, did his best to burst the frothy bubbles that may have been floated in Mr Rizo’s uplifting address. Coles' Simon Talbot says Treasury Wines' Penfold's range is one of the best examples of Aussie export success in China - offering bottled provenance ranging right up to $2000 a pop.

“Marketing is not the answer and I wouldn’t get too cocky about the rise of real prices,” Mr Daniel warned the crowd.

“What we produce today will still be a commodity at the point of sale tomorrow.”

He cited the wool industry as an example, which is “probably in terminal decline” because it “has got it very wrong, and doesn’t understand it’s not all about marketing”.

But it wasn’t all doom and gloom from the experienced hand.

“The drivers of production and productivity won’t change” and the potential for productivity growth – driven by technology and fresh flow of offshore capital among other factors – “is immense,” Mr Daniel said.

But Coles’ head of public affairs Simon Talbot, formerly National Farmers Federation chief executive, countered with a pitch for the importance of marketing.

he pointed to the 2000 per cent sales increase that targeted supermarket product placement can deliver and emplored the bright starts to “sell their story”.

“Geoff Daniel isn’t wrong (about the primacy of production) but he is wrong about the role of marketing,” Mr Talbot said.

“Don’t get caught in no man’s land,” Mr Talbot said.

“If you have a story to tell and good provenance from your region, than demand a premium from the market.” 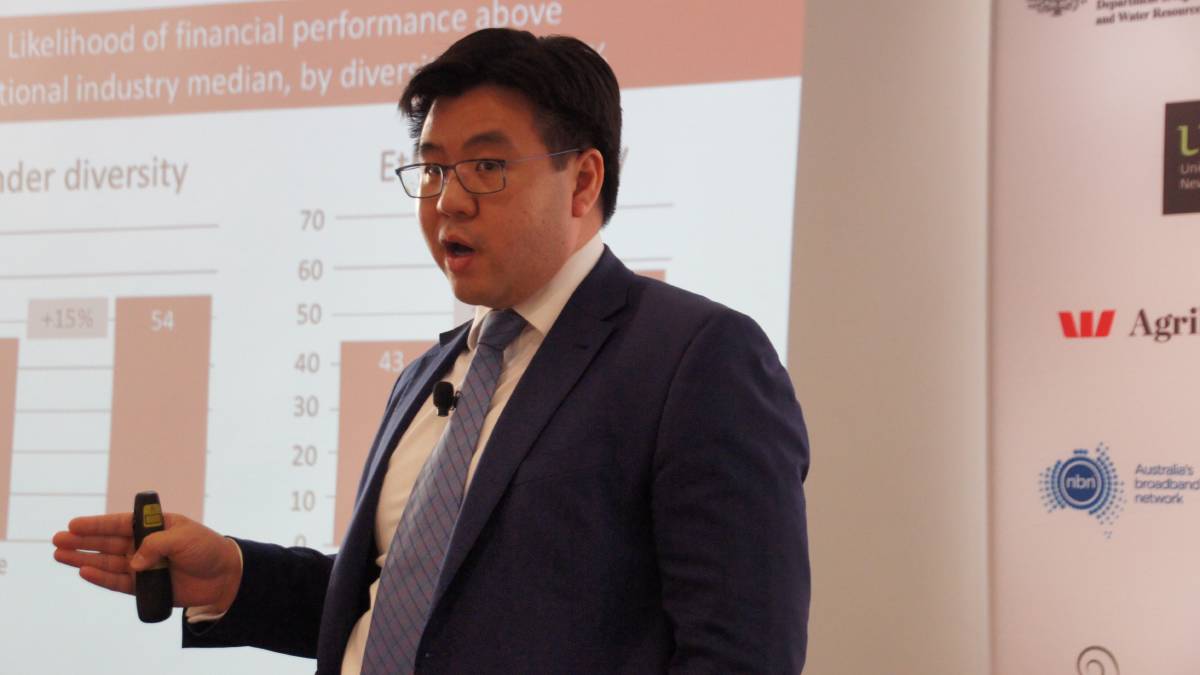 Companies with a leadership from a range of cultural backgrounds outperform Anglo-centric competitors. “Diversity drives profit,” he said.

But despite the challenges that confront the 100 young ag leaders, the conference floor crackled with solutions and seemed to justify the froth that bubbles among the next generation.

“Young winemakers from Burgundy come to Australia to test non-traditional techniques that are regulated out of the industry in France.”