A view from a helicopter shows the trail of destruction the flooding Lachlan River has left in its wake.

There is a crisis creeping relentlessly across the farming country around Forbes and its effects will last long after the sandbags and black plastic on town blocks are carted away.

There is a crisis creeping relentlessly across the farming country around Forbes and its effects will last long after the sandbags and black plastic on town blocks are carted away.

As breakfast television shows broadcast against the backdrop of Johnny Woods Crossing in the centre of Forbes on Monday, and debate raged about whether the town would be cut in two, out on the broad flat expanses where the Lachlan River winds west, farmers were counting costs that run into hundreds of thousands, even millions of dollars. 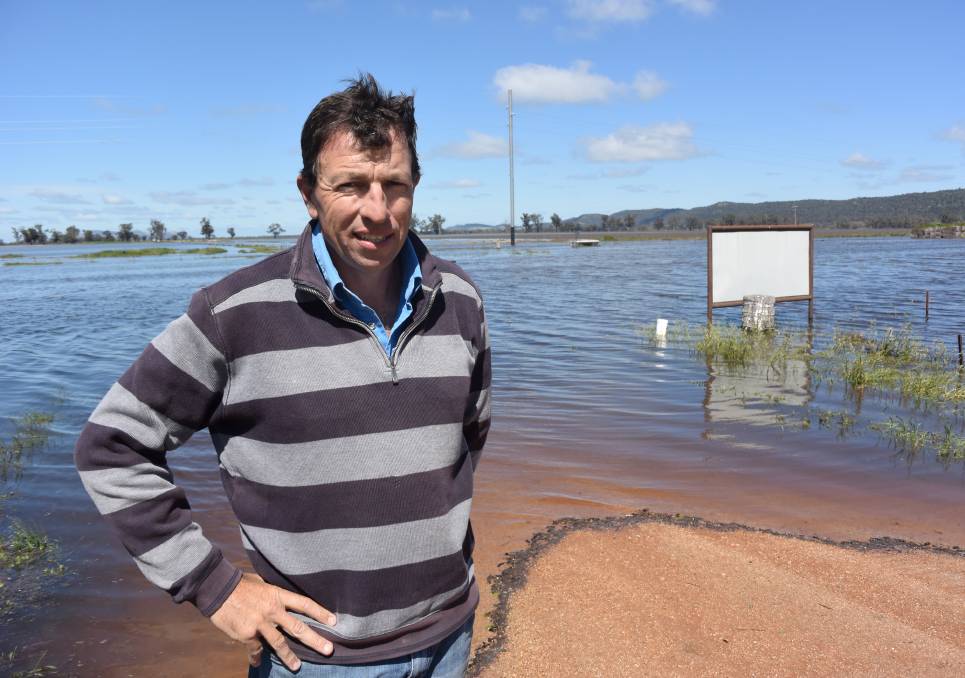 Agronomist Matt Shephard looks across the flooded Forbes - Condobolin road to a paddock that last year yielded a cotton crop.

At Riversleigh, 23 kilometres west of Forbes on the flooded road to Condobolin – the town next in line to be consumed by the spreading Lachlan – Sarah Black checks a levy bank she and husband Andrew built after the big flood of 1990, before reporting back inside. “At this stage it’s protecting us, but it won’t if it rains again,” she says.

Her daughter-in-law Julie, who runs a property near Trangie, has flown in by helicopter, stopping at the Forbes SES headquarters to pick up two managers from the Forbes branch of Rabobank.

Also present is Sarah’s husband Andrew, a vet, and a Dubbo agronomist and farmer Matt Shephard who has come down to check on a block behind the levee he leases from the Blacks. An excavator works to repair crumbling sections of the levee.

Nick Turner, a manager with Rabobank, talks in terms of $150 an acre to get wheat or canola crops to the point they were. All that has been lost by hundreds of farmers and tens and thousands of acres more are in the balance.

Premier Mike Baird’s declaration of a state of emergency in Forbes is welcome news but won’t stop the unfolding crisis in the Central West. Neither will government loans, he says.

“Low interest loans don’t tick the boxes because rates are already so low. Governments should leave debt funding to banks and look at grants.”

Mr Shephard says there must be some appreciation of the stewardship farmers undertake.

“It’s really frustrating our city counterparts don’t appreciate how good we are as stewards.” For Mr Turner there is an obvious justification for helping farmers.

“We cannot underestimate the multiplier effect farms have in local towns,” he says.

“If farmers are not spending money then we all do it tough.”

For Sarah Black if selling the message to metropolitan voters is hard it is because not only the source but the value of food has somehow been lost in a society where households throw away thousands of dollars worth annually.

“People don’t respect food or the people who produce it.”