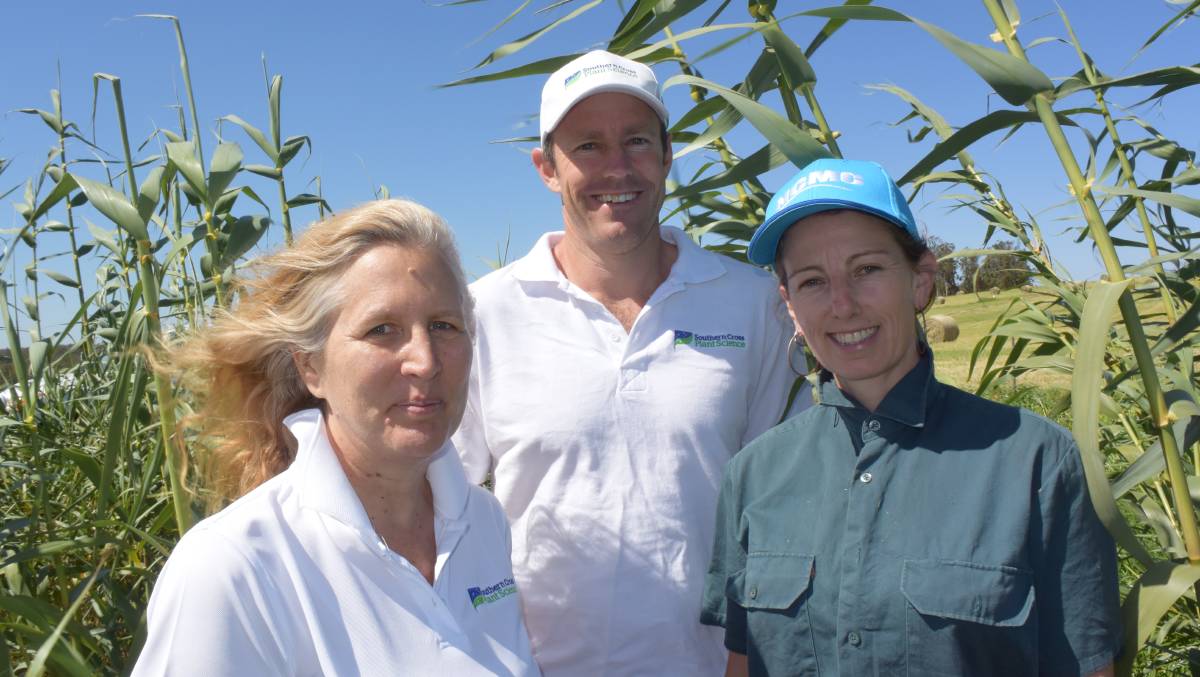 The first harvest from a small trial plot near Casino is expected to reveal how nutrient-rich effluent from the Northern Co-operative Meat Company can be removed off-site without it going to waste.

THE first harvest from a small trial plot near Casino is expected to reveal how nutrient-rich effluent from the Northern Co-operative Meat Company can be removed off-site without it going to waste.

Inspired by EPA’s desire to reduce pollution and funded through a three-way grant between the co-operative, the AMPC and MLA, and Southern Cross University the trial has applications way beyond the meat processing industry.

Project leader Associate Professor Bronwyn Barkla and Dr Terry Rose from Southern Cross University identified suitable plant species that could absorb nitrogen and phosphorous from abattoir effluent including and a variety of giant Asian reed, which is being tested against tea tree, bamboo, forage sorghum, annual rye grass and hemp.

SCU researchers and the NCMC team are particularly excited about the fast growing reed, Arundo donax, which promises to yield up to 90t/ha - more than four times as much biomass as the existing high yield crop of irrigated Rhodes grass currently grown and baled on NCMC land.

“We feed cattle in the pens with our Rhodes grass,” said NCMC systems and compliance manager Trevor Moore. “That is a good circle of nutrition as the crop is fed with waste water from the abattoir.”

While the perennial Rhodes pasture is simple to manage the co-operative is keen to ramp up nutrient absorption and the giant reed ticks boxes: the plant can absorb nutrient from waste streams that also contain salt, such as that from the co-operative’s tannery business.

Reverse osmosis membrane technology is the usual way to clean up salty waste but the process is expensive and at the end of the day there remains a concentrated heavy metal residue which still requires disposal.

Of course there are hurdles with this giant reed, as it is a declared noxious weed. But Dr Rose points out that the plant sets no seed and reproduces when its root rhizomes are transplanted elsewhere - usually from fast moving floodwaters. On the NCMC’s land where irrigation takes place there is no flooding impact.

Dr Rose says the green approach to nutrient absorption has application in other industries particularly local government sewage remediation. He has previously carried out research that demonstrated nutrient rich biochar retained those nutrients in a stable, slow release form and this trial will follow on from that.

The abattoir is now looking at biochar production as a way to export nutrient and give back to members.

WHEN it comes to processing waste there is the standard method – using sequentially batched reactors which require substantial energy and flocculants.

And there are alternative ‘out of the box’ ways of doing the same job. Northern Co-operative Meat Company is investigating the latter and after early trials is optimistic the answer will tick all the right boxes.

“The beef manufacturing industry is facing a lot of challenges at present and to be innovative is the way of the future,” said company CEO Simon Stahl. “And that applies right across all facets of our industry including what used to be regarded as waste.”

The abattoir’s systems and compliance manager Trevor Moore says he is excited about the potential in what was regarded as waste.

As the NCMC already uses green energy to power its plant – burning a mix of soft sawdust and hard macadamia nut shell in its biomass boiler – the thought that the company could become self sufficient in its energy needs has really raised eyebrows.

If such a scheme could also remove nutrient from effluent and possibly suck existing heavy loads out of the soil, then in Mr Moore’s eyes it ‘ticks all the boxes’.

Coming up with a way to windrow and dry harvested biomass prior to burning it in the abattoir’s boiler is yet another challenge, but not one beyond the ken of a clever farmer.

“We would rather look at a green application to this problem “ said Mr Moore. “And that involved biomass, bio-energy and bio char.”

When it comes to biochar Mr Moore said the idea that excess nutrient could be exported off site within a stable form of carbon and given to member properties as soil remediation was incredibly ‘exciting’.