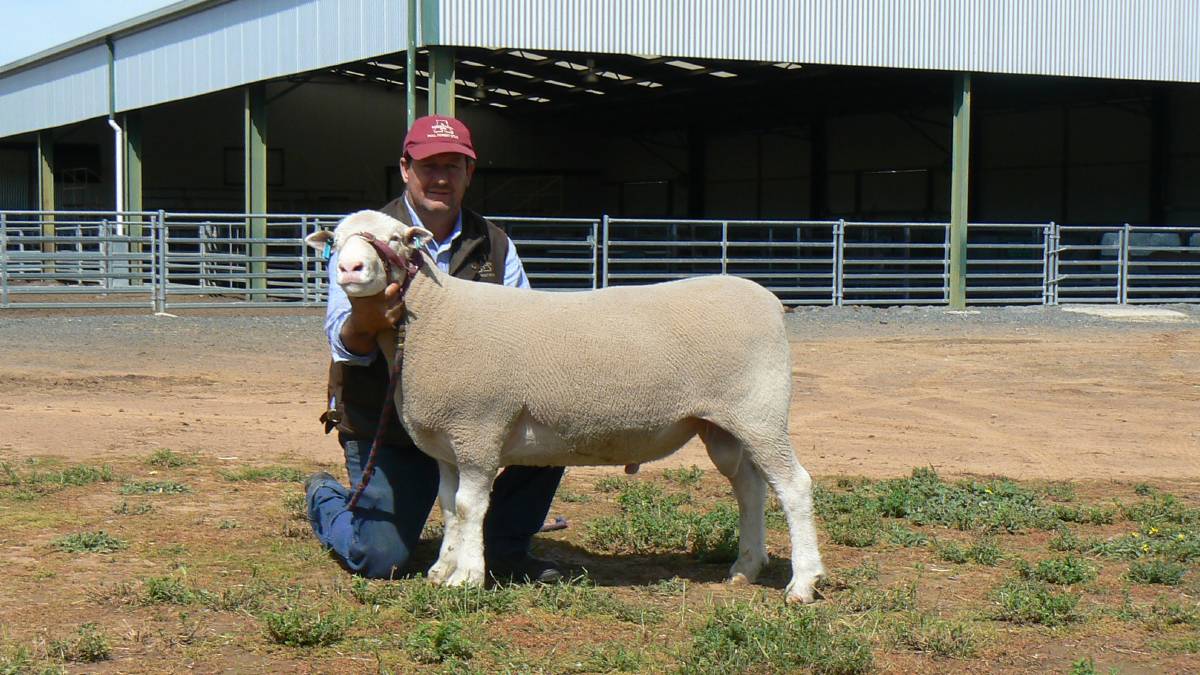 Interstate buyers dominated the top end of the 52nd annual ram sale for the Aberdeen Poll Dorset stud, Henty, and a total clearance was achieved for Simon and Melissa Male, “Marabou”, Henty, when they offered 189 stud and flock Poll Dorset rams for public auction. Nine stud rams sold for an average price $ 7672, with the top price at $17,000 paid by Western Australian interests, Evergreen Grazing Co, Kojonup, for a outstanding son of Hillcroft Farms 156-13.

Interstate buyers dominated the top-end of the 52nd annual ram sale for Aberdeen Poll Dorset stud and a total clearance was achieved for Simon and Melissa Male, “Marabou”, Henty, when they offered 189 stud and flock Poll Dorset rams for public auction.

Nine stud rams sold for  an  average price $ 7672 , with the top price at $17,000 paid by Western Australian interests, Evergreen Grazing Co, Kojonup, for a outstanding son of Hillcroft Farms 156-13.

The twin ram had been assessed by the purchasers on his figures which were on the Lambplan website, and Tom Heggaton, representing the first time buyer at Aberdeen said his structural correctness confirmed their intention to buy the outstanding sire prospect.

“He has size, and a real presence about him and he is what the Evergreen stud operation is looking for,” Mr Heggaton said.

South Australian based Paxton Poll Dorsets, Bordertown, were the losing bidders on the topped priced ram, but returned to bid strongly enough to secure a son of Aberdeen 16-12 for $10,000.

Not to be outdone, WR and MM Honner, “Maryvale”, Junee, secured their selection of two stud rams, and paid $8000 and $4259 respectively; while Yambla Station Partnership, Morven, paid $7000 for their choice of the stud rams.

Single purchasers in the stud offering also included John Yates Family Trust, Yerong Creek, who paid $2750 for their pick and SJ McDonnell and Sons, “Snowball Hill”, Gundagai, who bought a ram for $3000.

In the flock ram offering where 180  rams sold to a top of $3500 twice to average $1821, significant drafts were put together by return clients, including Robilliard Ag Pty Ltd, “Lauriston park”, Old Junee, who bought 26 rams for average $1981, Lester Farming Co, “Tamba”, Henty, who paid average $1666 for their draft of 12 rams and Winderadeen Corp, Wagga Wagga who selected 16 rams for average $1775.

“We have had a very difficult time preparing our rams, and we are very proud of the way they presented,” Mr Male said.

“Having a lot of return buyers indicates they are achieving results and are happy with the rams we are breeding.

“We have a fantastic clientele who do a great job with their lambs, and it reflects well on our stud.”

The sale was conducted through Riverina Livestock Agents, Wagga Wagga, with James Tierney being assisted by Michael Glasser, Glasser Total Sales Management on the rostrum