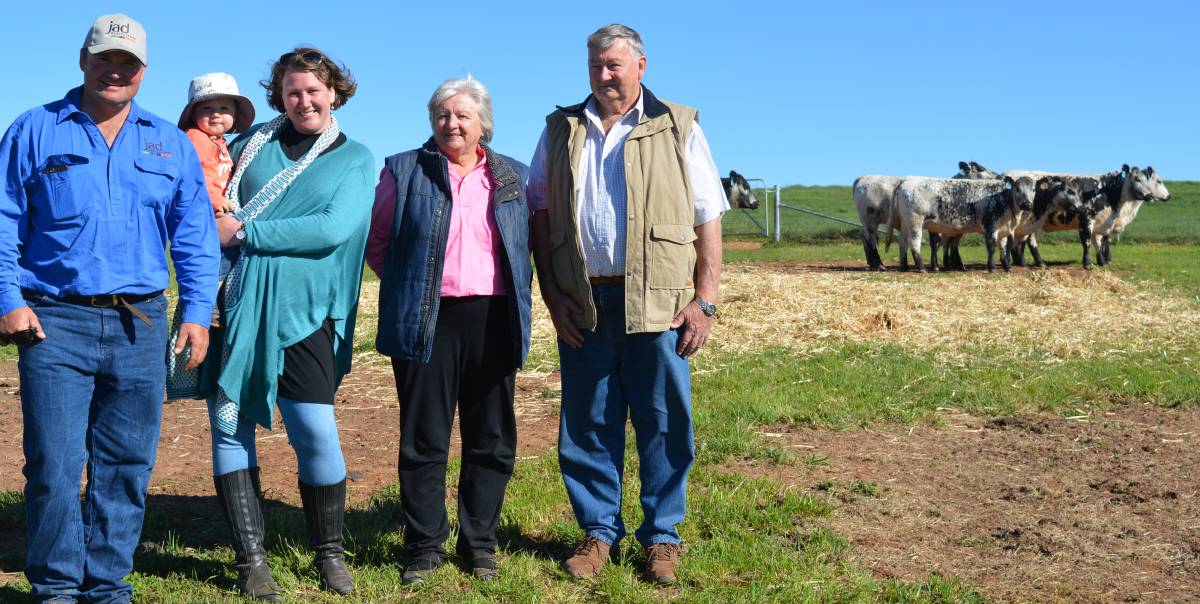 Justin, Amy and Mitchell Dickens with Helen and Richard Thompson, Palmers Island, who were the top bidders for the $5800 commercial Speckle Park PTIC heifers.

Guest vendors at the Wattle Grove sale, JAD Agriculture, “Greenvale”, Yeoval, owned by Justin and Amy Dickens, have set the bar for commercial heifers in any cattle breed.  One lot, consisting of eight commercial F1 preg tested in calf (PTIC) heifers, sold to Richard and Helen Thompson, Palmers Island, for $5800 per head, setting what is believed to be a new national record paid for a pen of PTIC commercial heifers in any breed.

The Thompsons secured three of the five lots offered, paying the second highest price of $5500 for a group of 12 F1 heifers PTIC to a Speckle Park bull, and $5200 for a group of eight. In total, the Johnsons averaged $5500 for 28 heifers.

“We were absolutely overwhelmed by how the heifers were received on sale day, and the intense competition to secure them,” Mr Dickens said.

“It was like nothing I’ve experienced before in my lifetime and probably never will again. We took great pride playing a role in a day that really raised the bar for the Speckle Park breed in Australia – it was a real endorsement of the breed and its strong future.

“The Wattle Grove Speckle Park purebreds looked terrific and that was represented through their outstanding result. We feel blessed to have developed such a great business relationship and friendship with Dale, Belinda and family, and congratulate them on their success thus far in the Speckle Park breed.”

“We are AI’ing 240 F1 Speckle Park/Angus heifers to one of the breed’s most exciting new sires, Maungahina Kidmans Cove K247, from New Zealand,” Mr Dickens said.

“We were attracted to this bull not just for his outstanding structure and low birth weight but also his terrific carcase data, with an intra muscular fat (IMF) of 8 - the highest in New Zealand. We will be keeping a number of these heifers to calve down ourselves and a portion will be made available for sale early in the New Year.”