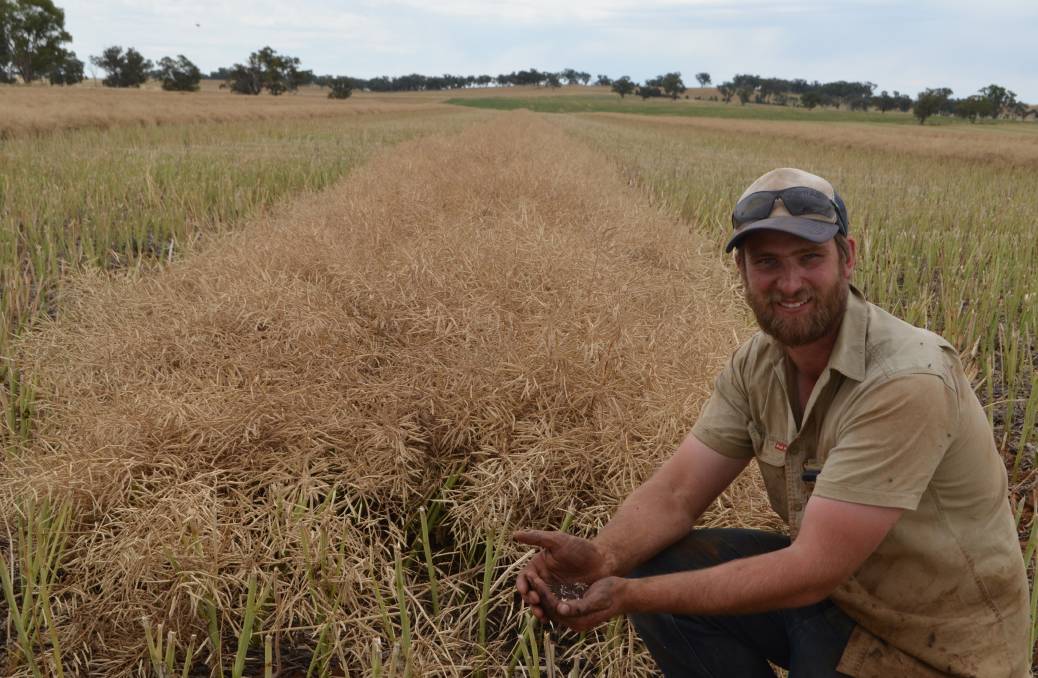 Dan Fox, "Gladlea", Marrar, holding a sample of canola near the remaining few windrows of the 615ha crop he has grown in partnership with his father David.

Nearing the end of harvesting 615ha of canola, Dan Fox, “Gladlea”, Marrar, said average yields across the total area sown are the best he has seen in his farming career.

Nearing the end of harvesting 615ha of canola, Dan Fox, “Gladlea”, Marrar, said average yields across the total area sown are the best he has seen in his farming career.

“Across the place we should average 2.5tn/ha,” he said.

“We have also been getting oil content up to 48.2 percent, which is fantastic, although some is as low as 43 percent.

“But we don’t get the big yields with high oil content.”

For Mr Fox and his father David, “crop yield is king!”

“At current prices we are about $150/ha in front with our better yielding crops rather than those with high oil content but lower yield,” he said.

Mr Fox had sown three varieties of canola … 44Y89 Clearfields, Hyola 559 TT and Bonito TT … from mid-April until early May.

“It was fairly dry at sowing, but we went into paddocks where the moisture was,” he said.

“Some of our crop germinated so it was quite a difficult start, but we got a shower of rain, about 10 to 15mm and the crops got going.”

Incredible as it seemed to Mr Fox at sowing, once the crop was up, steady winter rain caused a lot of trouble.

“It was difficult to get fungicide onto our crops at the right time due to it being so wet,” he said.

“We can see where we didn’t get enough spray onto some crops … we have probably lost up to half tonne in some areas.”

Nevertheless, Mr Fox is still very happy with the canola yields once it had been harvested, with current prices making it all worthwhile.

“We had committed 300 tonnes at $500 in September, and took some other contracts above $500 as we were confident of our harvest,” Mr Fox explained.

“But we are fairly conservative in our forward selling strategy in case we can’t deliver.

Mr Fox said canola has been a great crop this season and fits into their agronomic program as a ‘break crop’.

“But as we move forward, we are looking at sowing lupins or faba beans before canola to further extend our range of options in weed and disease control.” he said.