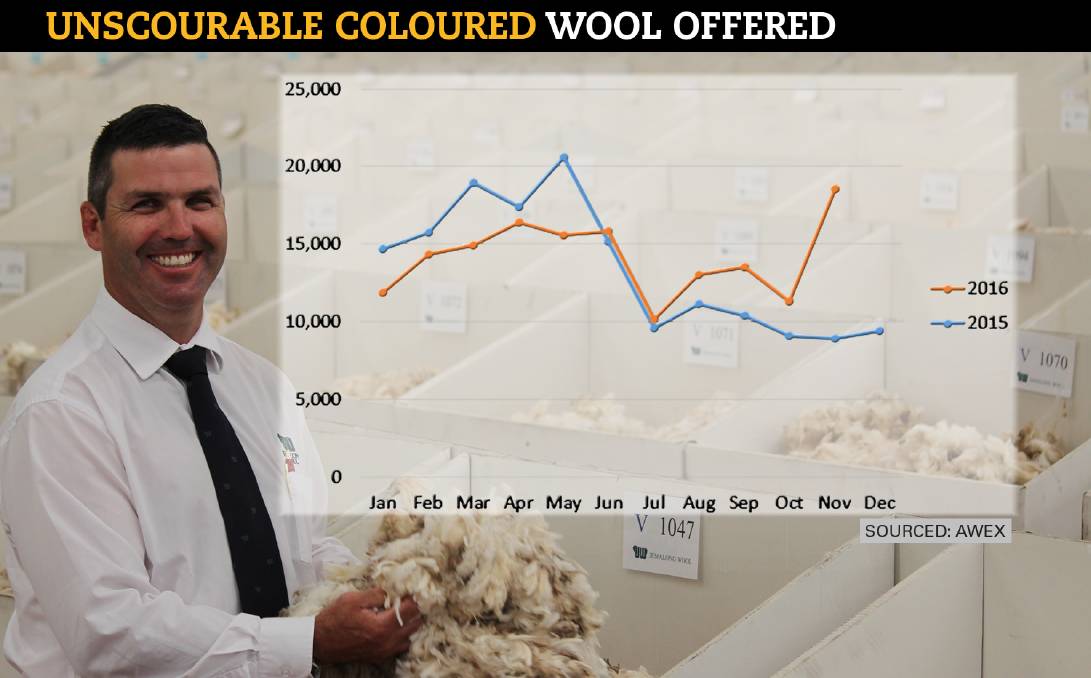 While wet conditions improved the national yield average, Jemalong Wool technical services David Quirk said there had been a spike in the number of unscourable coloured bales offered.

THE wet winter has been a double edge sword for woolgrowers with increased pasture polluting wool with burr and seed contamination.

THE wet winter has been a double edge sword for woolgrowers with increased seed germination resulting in significant price discounts for wool contaminated with burrs and seeds.

Disadvantaged wool due to high Vegetable Matter (VM) remains stable as the mid-season recess nears, however there is general concern of severe fleece contamination in the new year for wool produced in pastoral zones and high rainfall areas of southern NSW, western Victoria and south east South Australia.

“Riverina woolgrowers have had enormous seed set following one of highest winter rainfalls on record, which is great, but with that comes fire risk and significant seed set,” Jemalong Wool technical services David Quirk said.

“It is a massive season, but there is the downside.”

He said some properties in central and western NSW were expected to exceed high levels of VM last seen in 2014, when bellies had up to 30pc wool contamination and up to 15pc of fleece.

“There can be up to 200 cents per kilogram clean discounts for fleece wools with these levels of VM,” he said.

Spring rainfall was in the top 10 per cent of records for parts of Tasmania, the southern Murray-Darling basin and adjoining regions of southwest Victoria, eastern South Australia.

This was marred by a spike in the number of unscourable coloured wool bales offered nationally which were impacted by fleece rot and yellowing due to wet conditions.

“This period will become a challenge when the proportion of low VM wool falls to around 30pc, as it did in 2006 and 2011,” Mr Woods said.

“The volume of very high VM, with more than 12pc, which is much more volatile than indicated by the overall average VM level, should rise again in 2017 given the seasonal conditions of the past couple of years.

“Discounts for these types can be expected to open out again to wide levels as they did earlier in 2016.”

Mr Woods said VM levels in the east, with wool mainly from NSW, Queensland and northern South Australia, were higher than WA.

While the VM level in the western clip is at decade lows, he said the eastern average VM was at 2pc.

An increase supply of VM wool will cause its relative value to decrease, in the form of larger discounts.

“A lot of consignments require an average VM level of 1pc, so exporters need sufficient volumes below 1pc in order to add higher VM wool into the consignment and still meet the required average, while meeting price and other wool characteristic targets.

“Such is the stuff of an exporters work day.”

“There will be more kilograms of wool produced with extra cut per head and more bales but that won’t necessarily offset the level of discounting,” Mr Miller said.

“It can be managed. Woolgrowers need market savvy intelligent advice from their wool brokers on how to work with wool classer and shed hands to manage higher VM in wool clips.”