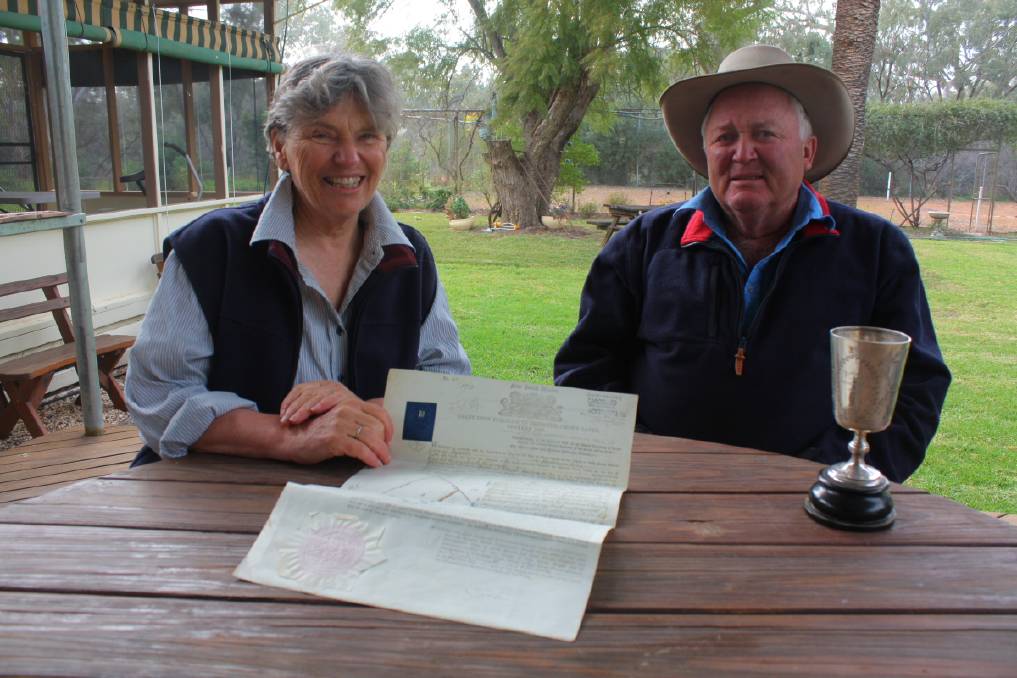 Pam and Doug Caley with one of the original title deeds to Bangate Station and the Bangate Shearers’ Cup - a reward to shearers who defied union threats in the 1890s.

Doug and Pam Caley's Bangate Station - once a vast holding of 87,000 hectares - has a history worth reading.

Signs of strain, and perhaps of looming crisis, were evident in the advertisement placed in the local Walgett newspaper amid worsening drought in 1889 by Langloh Parker, the financially besieged owner of Bangate Station.

“Bangate Station via Narran River - Warning to Travellers,” it said, “No Work and No Money.

“Owing to shortness of supplies, rations will neither be sold nor given until further notice. All are strongly advised to keep to the towns where they are within the reach of tucker. (Signed) Langloh Parker.”

This was the same Langloh Parker who had taken over the prized Bangate Station in happier times 14 years earlier from its founding settler, William Forrester, at a reported purchase price of 40,000 pounds ($80,000), financed by mortgage from the pastoral tycoon James Tyson. 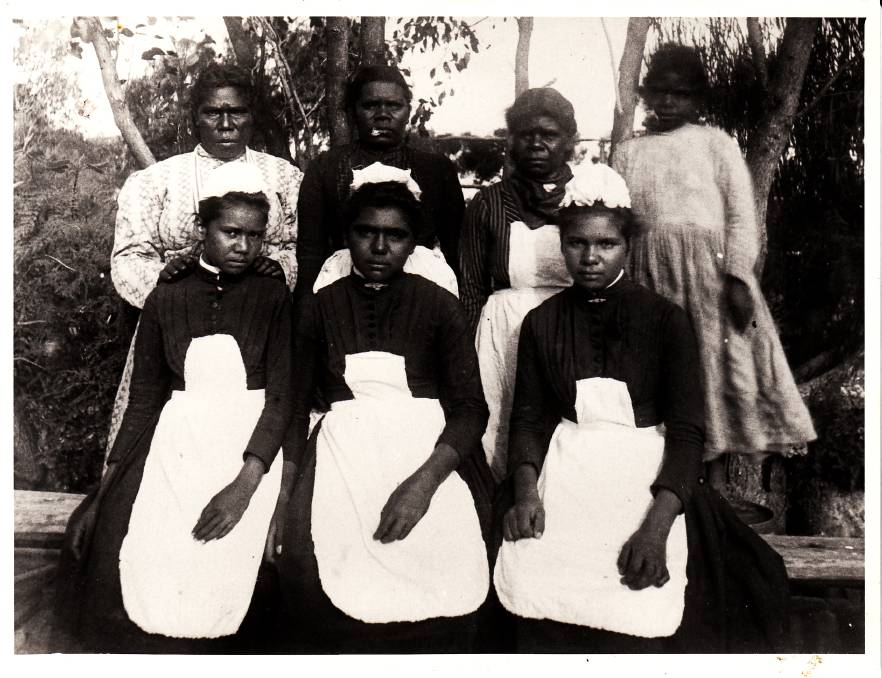 Yet within just a year of placing his “keep out” notice to prospective swagmen, Langloh Parker was himself a mendicant, after Tyson foreclosed on a debt which by then (according to one source) had soared to 92,000 pounds, or more than $13 million in present-day values.

Parker was reduced to the role of manager, and although he held out hopes that he might in time win back the station, such was not to be.

Tyson died in 1898, and the following year “Bangate” was put up for auction on behalf of his estate by Dalgetys, along with his Goondoobluie Station at Collarenebri, and both were bought by the New Zealand and Australian Land Company (known as “the Land Company”).

Since then, “Bangate” has had just two owners (not counting Dalgetys, which took over the Land Company in 1969): the Gleesons, who bought it from Dalgetys in 1975, and Doug and Pam Caley, who bought it in 2004 in a strategic shift from Nyngan.

Today the Caleys’ “Bangate” (incorporating a “Bil Bil” former soldier settler’s block now restored to the main holding) is a substantial station property of some 28,000 hectares fronting the Narran River midway between Lightning Ridge and Goodooga.

But when held by Langloh Parker it was a vast holding of 87,000ha – one of a handful of famous-name stations then dominating the district, among them Angledool, Boorooma, Llanillo, Brenda, Dungalear and Dunumbral.

“Bangate” was originally known as “Gumblegubbin” when taken up in the 1860s as a cattle run by William Forrester – a native of the Hawkesbury district, where his family’s founding forebear had settled as an emancipated convict.

Known to his close friends as “Black Bill” (to distinguish him from a cousin, “Red Bill”), he was a popular figure in colonial society and in later years, when he lived at Warwick Farm, a successful breeder and trainer of racehorses.

He won two successive Melbourne Cups in 1897 and 1898 with Gaulus and The Graftera respectively, before dying from a stroke in 1901 aged just 57.

After taking over “Bangate” from Forrester in 1875, Langloh Parker initially ran cattle, but increased his sheep numbers as profits from woolgrowing increased. By 1888 he was carrying up to 138,000 sheep, and seldom fewer than 80,000.

Shearing took place in a rough shearing shed of 40 blade stands, later replaced by a sturdy, timber-and-iron 32-stand machine shed erected on the same site in 1904 by the Land Company.

Built in a T configuration with the two-sided board and pens forming the crosspiece and the wool room and bale storage area the upright, the Land Company shed is still in use, though now with just 12 equipped stands.

Renovations carried out by the Caleys in 2005 to remove sagging timber flooring effectively created a raised board, by leaving the board intact and lowering the rest of the floor (previously elevated) to ground level and concreting it.

The cavernous storage section of the shed has ample space to store an average annual woolclip of 400-500 bales, and on occasions in the past – when floods have prevented wagons from getting through – two woolclips have been held in waiting.

A famous photograph published in the Sydney Mail in August 1927 depicts a wagon-load of 101 wool bales from “Bangate” en route to railhead in Walgett – a gruelling haul of 120km. It was claimed to be the record load of the season in that district.

A look at Langloh Parker

Despite being one of many pastoralists ruined by the 1890s trifecta of drought (exacerbated by years of overstocking), rabbits and depression, Langloh Parker was well regarded by his peers.

Born in Tasmania to emigrant landowners, Parker gained pastoral experience on the mainland under the patronage of his uncle, Augustus Morris, who owned Yanga and Paika stations in the Riverina.

He dabbled in Queensland properties, for a time holding Retreat Station on the Barcoo in partnership with a Colonel Ward, who was also an early partner with him on “Bangate”. The two tried to sell “Bangate” at auction in 1878, but when that didn’t eventuate, Parker bought out his partner and decided to settle there with his new bride.

An obituary published in the Pastoralists’ Review following Parker’s death at just 64 in 1903 describes him as “a man of high honour and great power, a splendid judge of stock, and generally popular”.

But he was also something of a playboy, reckless, debonair and socially well connected, and no doubt highly attractive to the much younger 18-year-old Katie Field whom he married in 1875 when he himself was nearly 36.

Katie Field was a daughter of Henry Field, a pioneer settler from South Australia who took up Marra Station on the Darling with his brother-in-law, Simpson Newland, and it was there that Katie spent her childhood – an apprenticeship in outback living.

“Bangate” at the time she settled there in 1879 as Mrs Langloh Parker was even more remote than “Marra”. It was a journey of four or five days by buggy to the nearest town, Walgett, and their few pastoralist “neighbours” were scarcely less accessible.

Much of what we know about “Bangate” in the early days comes to us from My Bush Book, a diary-cum-memoir written by Katie about her life on the station and later discovered in manuscript form by Adelaide author Marcie Muir and published as a book in 1982 with an accompanying biography.

Katie also wrote three books that were published during her lifetime, of Aboriginal legends, all based on stories told to her at “Bangate” by members of the local Noongahburrah tribe, whose language she had made it her business to master.

In My Bush Book, she glosses over the financial worries and the seasonal vicissitudes of flood and drought that were recurring features of outback life, and focuses more on the day-to-day trials of running a remote station household.

She tells, often humorously, of the battles to keep a garden alive, the ill-suited “married couples” often sent to them by their city agent as domestic help, and the challenges she faced as the self-appointed station nurse, tending sick and injured staff.

The closing chapter of the book deals somewhat heartbreakingly with the Parkers’ enforced departure from “Bangate” after the foreclosure. They moved to a small adjoining block near Grawin which Parker had earlier purchased in Katie’s name.

Parker, however, went rapidly downhill in mind and body after their eviction from “Bangate”, which he interpreted as a personal failure. He died in 1903 aged just 64. Katie, who was still only 47, remarried and lived in Adelaide until her death in 1940.

Nothing remains today of the original Langloh Parker homestead, which was situated some 14km from the woolshed and other station buildings, where the present homestead – built in 1962 by the Land Company – now stands beside the river.

But among the relics of earlier times is a station cemetery, containing a scattering of weathered graves, and the steam engine which once powered the woolshed: it now sits alongside the station entrance ramp, painted silver, as an arresting local landmark.

And if you close your eyes, you can almost hear the ghostly refrain of that 1890s ditty, The Squatter’s Farewell, which the Langloh Parkers and their sympathetic neighbours and staff sang together on the eve of their enforced departure:

But the banks are all brokers, they say,

And the merchants are all up a tree,

When the big bugs are brought to the Bankruptcy Court