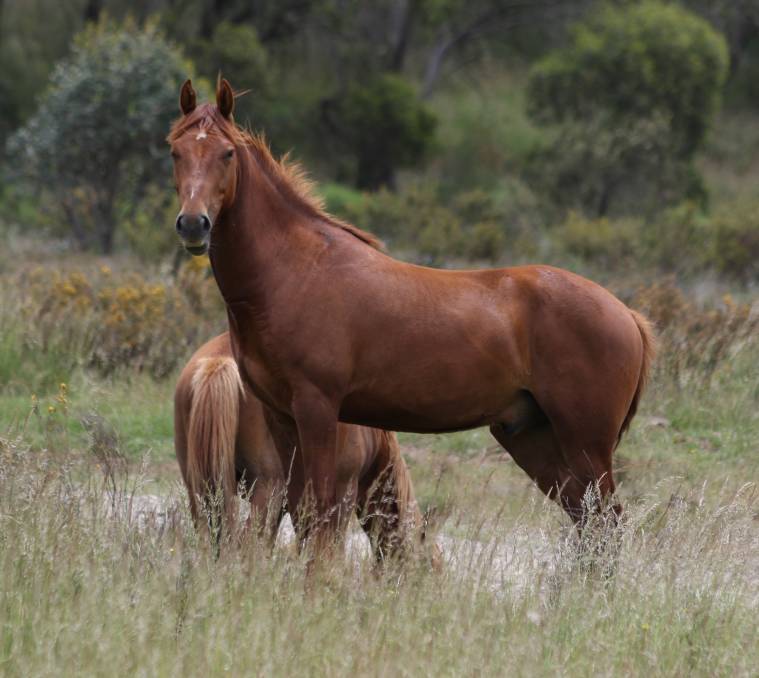 A wild horse on Long Plain in the northern part of Kosciuszko. Photo by John Ellicott.

Brumbies may be protected for their cultural heritage value in new legislation being drawn up and already, according to the proponents, met with approval by NSW Nationals leader John Barilaro.

The Snowy Mountains Bush Users Group wants to prevent a culling of brumbies, which may form part of the new management plan - with ground shooting touted as the most likely form of control. They want a return to licensed mustering of brumbies and a continuation of passive trapping of the animals.

But ironically, the 100th anniversary of the World War 1 battle of Beersheba in which Australian horses helped achieve a massive military victory, could be the catalyst  to save brumbies from large scale culling in national parks.

Users Group president  Peter Cochran, the former Nationals state MP for Monaro, who now runs horse treks from Yaouk into northern part of Kosciuszko, said his group had commissioned lawyers to draw up draft legislation that would enshrine brumbies as having important cultural heritage values. Mr Cochran said his group had approached Nationals leaders John Barilaro’s office and the response had been positive. It could be the first time in Australia a living animal will be classified as having significant cultural heritage value.

Mr Cochran maintains the brumbies have strong links to the horses used as remounts during the Boer War and in World War 1, and particularly at the battle of Beersheba. But a report by the National Parks and Wildlife Service, Context, published in December, 2015, found  war links to brumbies were “tenuous”. Although at some stage brumby stock was used for war remounts, from what areas they originated from is largely unknown. Nevertheless the celebration of Australian horses during the cavalry charge of the Australian 4th Light Horse Brigade at Beersheba on October 31, 1917, later this year, is expected to ignite public sentiment for preserving brumbies.  (The vast majority of remounts were taken from pastoral stations and bred at places such as the Wyndham family’s  horse studs at Inverell - a major supplier of Walers, bred from many breeds, including Timor Pony, to India.)

The move to enshrine brumbies on the heritage register apparently supported by the Nationals though may be met with stiff opposition inside the Coalition government as NSW Liberal Environment Minister Mark Speakman has already flagged a massive reduction in brumby numbers in the park - hoping to reduce Kosciuszko numbers from an estimated 6000 to about 600, partly using the method of ground shooting. He said last year that he supported ground shooting and defended it as humane.  “An expert shooting at the cranium of a horse can kill it in eight or nine seconds, so there is very, very little suffering,” he told ABC’s Landline. The new NSW Government management plan will replace the 2008 management plan, but is unlikely to allow for the reintroduction of brumby-running in the Snowy Mountains. Since 2002 passive trapping has caught 3200 brumbies, but  more than 80 per cent ended up at the abattoir.

The NPWS report, Context, found that brumbies were of cultural significance and that “cultural heritage values identified should be addressed, and that this implies retaining a wild horse population in an appropriate location or locations within the KNP’’.  Damage to the park and water streams by brumbies has been extensively documented.