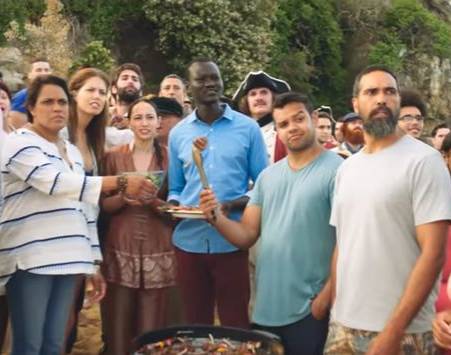 Meat and Livestock Australia's annual Australia Day lamb ad has traditionally been an exercise in chest-beating patriotism that mocked anyone not celebrating the holiday "properly" - including vegans and those eating "foreign" food.

This year, it doesn't mention Australia Day at all.

Amid growing calls to move Australia Day from January 26, the industry group on Thursday released an ad that confronts head-on the controversy around hosting the national day on a date marking the start of colonialism and Indigenous dispossession.

The ad starts with three Indigenous Australians on a beach who remark on being the "first here" but that the beautiful location would be "packed before you know it".

A procession of boats then arrive, notably starting with the Dutch, followed by the British (whose claim to be the "First Fleet" is met with laughter), the French, Germans, Chinese, Italians, Greeks, Serbians, New Zealanders and finally "boat people".

At one point Olympic legend Cathy Freeman asks the hosts what the occasion is. "Do we need one?" is the answer.

The campaign is a departure from MLA's previous campaigns starring Sam Kekovich, which since 2005 have painted Australia Day as a sacred occasion and called anyone who eats "foreign" cuisine like "a number 42 with rice" instead of lamb on January 26 "un-Australian". ​

January 26 is the anniversary of the 1788 arrival of the First Fleet, which many Indigenous Australians find offensive and have dubbed "Invasion Day", as it also marks the start of colonisation and frontier violence.

The City of Fremantle has cancelled Australia Day celebrations this year, deeming them culturally insensitive, and will instead host a "culturally-inclusive" event on January 28.

Meanwhile youth radio station Triple J has said it would consider moving the date of its annual Hottest 100 countdown after lobbying from listeners and popular hip-hop group A.B. Original.

MLA's marketing manager Andrew Howie said the ad was informed by consumer insights and feedback from past campaigns and was about celebrating diversity.

"Ultimately, as the face of Australia continues to evolve and change, we need to make lamb relevant to a diverse, modern Australia," Mr Howie said in a statement.

The ads will run until January 26.

This story first appeared on The Sydney Morning Herald.