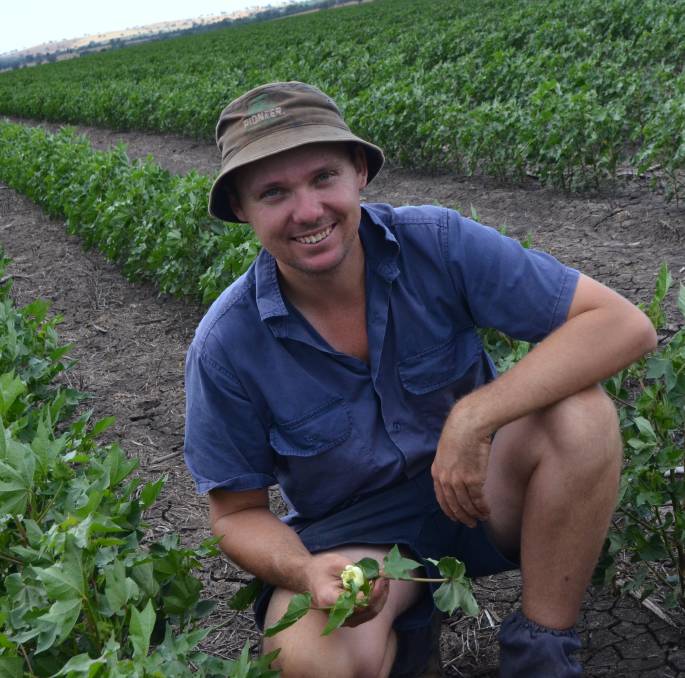 Cropping manager Josh Edwards in the cotton crop at "Kurrajong Park", which has started flowering.

Dryland cotton was the focus of a series of field days held at Coolah, Parkes and Baradine last week, but there are also sites at Inverell, Coonamble, Condobolin and near Bingara. There’s even one grower taking a punt on a crop at Horsham in Victoria.

“This season had the perfect start for dryland cotton, but a couple of things have influenced people’s decisions – the price compared to other commodities as well as the full moisture profile from winter rains,” Mr Ford said.

“They’re also looking for alternative summer crops for disease break as they’re getting resistance in some of the winter weed species.”

The crops are looking good, but with the next few weeks set to influence yield outcome, they’re in need of rain. They range from 16 nodes to 22 nodes and have started flowering. The earliest crop at Coonamble flowering before Christmas.

“The last couple of weeks have been pretty miserable but all it takes is 25 millimetres and it’ll spark back up,” Mr Ford said.

The next step will be to create industry around the new growing areas once cotton has been established as a viable crop, Mr Ford said.

“In southern NSW there was one gin at Hillston eight years ago but now there are four gins in the Hillston and Murrumbidgee areas, so if these trial areas did take off, there’ll be interest from ginning services.”

The state’s easternmost cotton crop is being grown at “Lindale”, Oakwood, near Inverell. It had cold start and a few issues with establishment, but high temperatures in the past few weeks have kicked it along, according to McGregor Gourlay agronomist Helen Rose, Goondiwindi.

The Inverell trial comes after three years of cotton being grown at Wallangra.

“Cotton has been really successful at Wallangra, but there’s a big temperature difference in the 70 kilometres between Wallangra and Oakwood. I think when the cold creeps in towards defoliation and picking, that might be the limiting factor, but it’s looking promising.”

At Coolah, “Kurrajong Park” cropping manager Josh Edwards has planted 220 hectares of dryland cotton which has started flowering despite a late planting.

“When we planted it was about 12 days behind but with the warm weather it’s catching up so it’s closer to six days now,” Mr Edwards said.

“Cotton is a crop that the company (Paspaley Pastoral) has been looking at for a few years and it’s going well.”

Picking and ginning won’t be an issue, with gins at Boggabri and Carroll.

“We’ve already organised a picker that’s only 40km away at Premer, so it’s not too far from other cotton areas.”