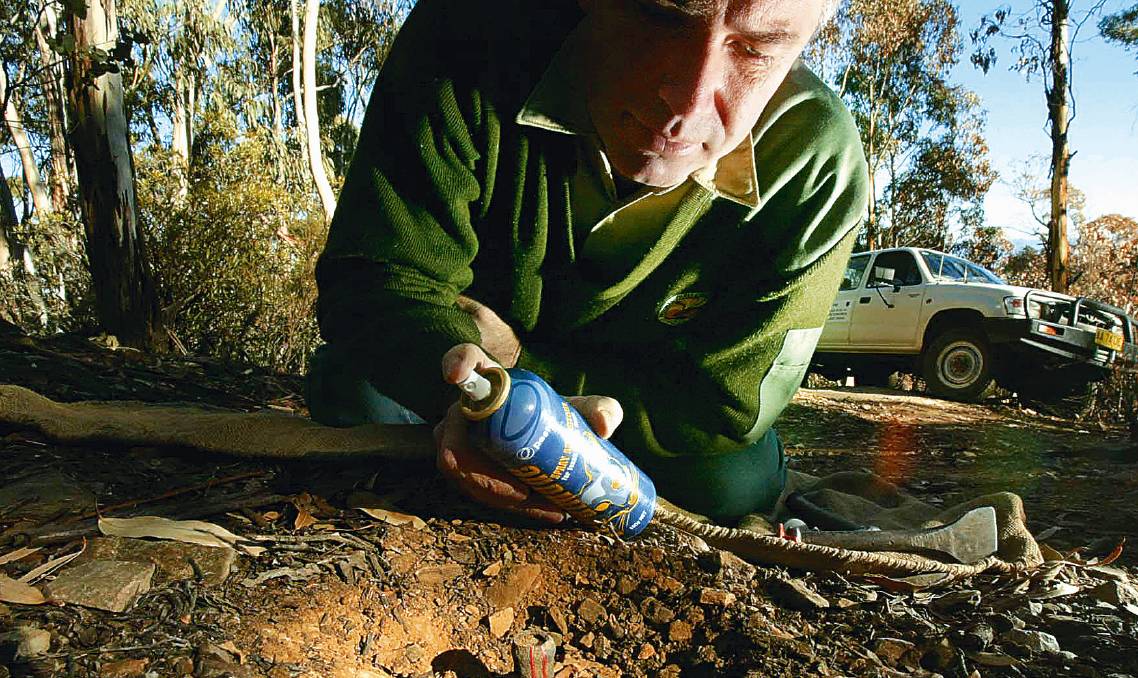 A NPWS ranger at work setting fox traps at Tinderry Nature Reserve. Will such work be curtailed by the parks shake-up and cutbacks ?

Almost 100 years of land management knowledge has walked out the door in an overhaul of the structure of the NSW NPWS.

The amalgamation of regions, reduction in regional and area managers and rangers in the NSW National Parks and Wildlife Service has farmers concerned that feral pest, weed and fire management is at serious risk.

The fundamental rejig and refocus of the park service from parks management to a tourism and commercial based approach has upset some landholders near parks and also those working in the service.

The number of national parks regions will be cut from 14 to eight and area managers reduced from 50 to about 30. Park ranger numbers have already been cut from 300 to 212 under $40 million in redundancies and cutbacks in the past five years.

Sources in the park service say the cuts will damage the good rapport built up over many years between farmers and the parks service, and personnel adept at fire and pest management have been lost.

According to the Public Service Association (PSA),  rangers will be overloaded with new tourism duties, taking them away from on the ground management of parks - which cover 10 per cent of NSW. Often rangers are flown into remote locations to fight fire outbreaks.

NSW PSA secretary Stewart Little said nearly 100 years of knowledge of parks management had walked out the door with the managerial overhaul.

All 14 regional managers had to re-apply for the eight positions left and only three existing managers were retained (at Kosciuszko, Dubbo  and Narrabri offices).

One of the lost regional managers is one of the most experienced parks firefighters in the state. He was denied one of the new positions, declared to be “unsuitable”.

The cultural change that insiders say is an attempt to make parks staff more “compliant” to government policy, will see the professional status role of rangers diminished.

There will be no remuneration recognition for rangers with degrees - many rangers have degrees in forestry or natural sciences - and advancement will be on a merit basis, not length of service.

The base ranger rate starts at $50,000. They can move up to $90,000, but insiders say it will be much harder for rangers to earn the top dollars over their career, affecting the calibre of candidates wanting to join the service.

At the moment rangers do everything from “cleaning dunnies, managing fire trails to writing in-depth species reports”.

They are looking for more executive style public servants rather than senior land managers. - Parks insider

Insiders say the loss also of experienced managers will leave a vast gap in experience. “If they are going for the more generic style of sector manager the people in those roles won’t have the knowledge base and know what actions to take on complicated risk-based issues.

They are looking for more executive style public servants rather than senior land managers.” The filtering down of cutbacks would eventually lead to effects on the ground in managing feral animals. “If one area manager is laying 500 baits today, by the time these changes take effect he or she will only be doing 300 baits a year,’’ an insider said.

But Warrumbungle shire council mayor Peter Shipton, “Oxley”, Coonabarabran, said he had seen no discernible change in the two offices controlled by the service in his area.

Mr Shipton, who is chair of the Castlereagh Zone Bushfire Management Committee said he did not believe the cuts would affect service operations on the ground.

“The cuts are mainly aimed at upper management,” he said. “As far as I know all the local committees will continue as is and should last at least another three to four years, after that, we are not quite sure.’’

Landholders near Warrumbungle National Park are still fighting for compensation, after a fire in January 2013 that came from a park campground destroyed 50 homes and devastated up to 100 landholders. The residents, those that have stayed, are still in a battle with the state government to get public liability compensation. It is likely the dispute will go to court.

Stephen Lill, “Glenmore”, lost valuable stud cattle with a damage bill of almost $2 million - and he received just $644 from the Coonabarabran Fire Appeal. Mr Lill says the National Parks were the “worst neighbours you could have”.

“They have denied culpability all along. All we get out of the park here is vermin and rubbish. If they appoint just one person who knows what they are doing in fire situations then that will be good. My opinion is that it is already rotten.”

The NPWS has denied the changes will effect on the ground services.

A spokesperson for the NPWS said: “While the senior management structure changed it has not impacted the delivery of local on ground services and management of parks across the state.

The changes also do not affect the delivery of emergency response, fire management, visitor services and important conservation work.

“Our key focus on fire, pests, weeds, asset maintenance and visitor facilities remains unchanged. Key priorities are being specifically targeted, for example hazard reduction through the $76 million Enhanced Bushfire Management Program, and threatened species through the Saving our Species program.

This focus will enable us to continue to build on the record levels of hazard reduction delivered over the past five years.”

Thomas Ebersoll, who runs a cabin stay business at Newnes, says he does a Monday clean-up of camping grounds in the Wollemi National Park because parks staff don’t have the resources. He also has to offer water and toilets to tourists because of a lack of facilities.

He says park rangers are always being harangued by bosses for not doing enough work. “For us at Newnes in the Wolgan Valley this has meant less maintenance and lack of providing much needed infrastructure eg. walks, signage, toilets and water.

For the few staff which are left it must be very demoralising to know that they can't do their job with the resources they have been provided.”