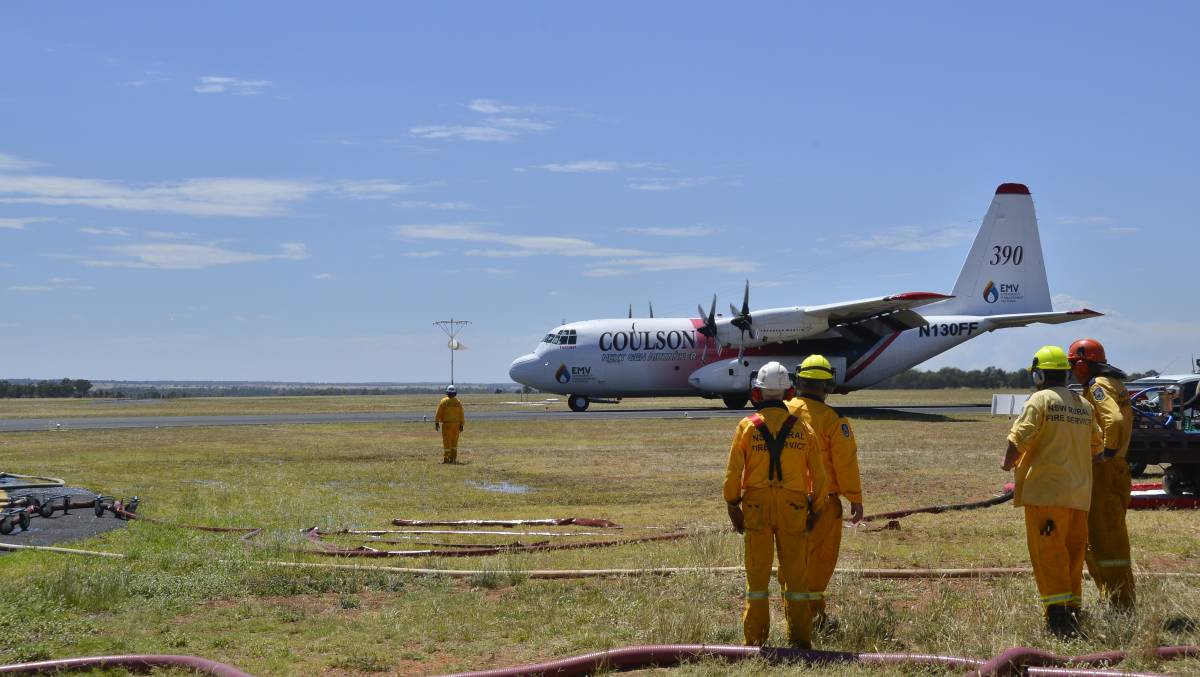 A large air tanker was deployed from Victoria to the Dubbo airport to assist firefighting efforts on the weekend. Photo: Paige Williams.

Producers are inspecting the extent of the damage of the weekend's blaze.

WHILE fire crews battle to contain the 42,000-hectare bushfire at Leadville, its trail of destruction is clear to see.

The fire, dubbed the Sir Ivan fire, has all-but wiped out the small village of Uarbry, and claimed numerous homes, livestock including renowned stud stock, buildings including one historic homestead, and other farming assets throughout the Leadville, Turill, Cassilis and Coolah districts.

Producers will join property assessment teams from the Department of Primary Industries and NSW Rural Fire Service this morning to record the full extent of the damage.

Here’s what we know so far:

Homes were saved at Armstrong family’s “Cassilis Park” but not all Merino stud stock have been accounted for.

James Armstrong, son of Cam and Winks, said they will find out the full extent of the damage later this morning.

“We thought the whole place was burnt out but we don’t think that’s the case anymore,” James said.

The Lennons run an organic Wagyu operation on Wardens Road.

All cattle and domestic cattle have been accounted for bar two horses. A search for the horses will commence shortly.

The Lennon’s house, both sheds, bottom cattle yards and all pumps were saved but all other infrastructure was lost.

Lou, Jen and Henry Armstrong’s “Pemcaw” Merino stud at Dunedoo was unharmed by the fire.

Sid Reynolds’ property, Turee Station, said pasture paddocks had been destroyed but the vast majority of the property was unaffected. No stock had been lost and the homestead and all outbuildings remained intact. The full extent of the damage of the weekend's blaze is being assessed today.

The Land is now working to confirm the following:

The Baillieu family’s signature property, Tongy Station, at Cassilis is believed to have been totally destroyed. There are unconfirmed reports the blaze claimed the property’s historic homestead, outbuildings and woolshed.

“Moreton Bay” and “Moreton Bay South”, positioned along the Golden Highway between Dunedoo and Cassilis, is believed to have suffered stock losses. The homestead has been saved, although some outbuildings were destroyed.

We don’t yet know the extent of the damage sustained at Dalkeith Hereford stud at Cassilis.

Telstra has confirmed its towers in the district are offline. Crews are working to restore communications in the area.

The Golden Highway remains closed between Dunedoo, Merriwa, Denman and the Hunter Expressway at Singleton.

If you are in the Central West region and require assistance with animals due to fires, please direct your call to the Coonabarabran Local Land Services office. Phone: (02) 6842 6600.

A community meeting will be held at the Coolah Sporting Club, Goddard Street at 11am today.