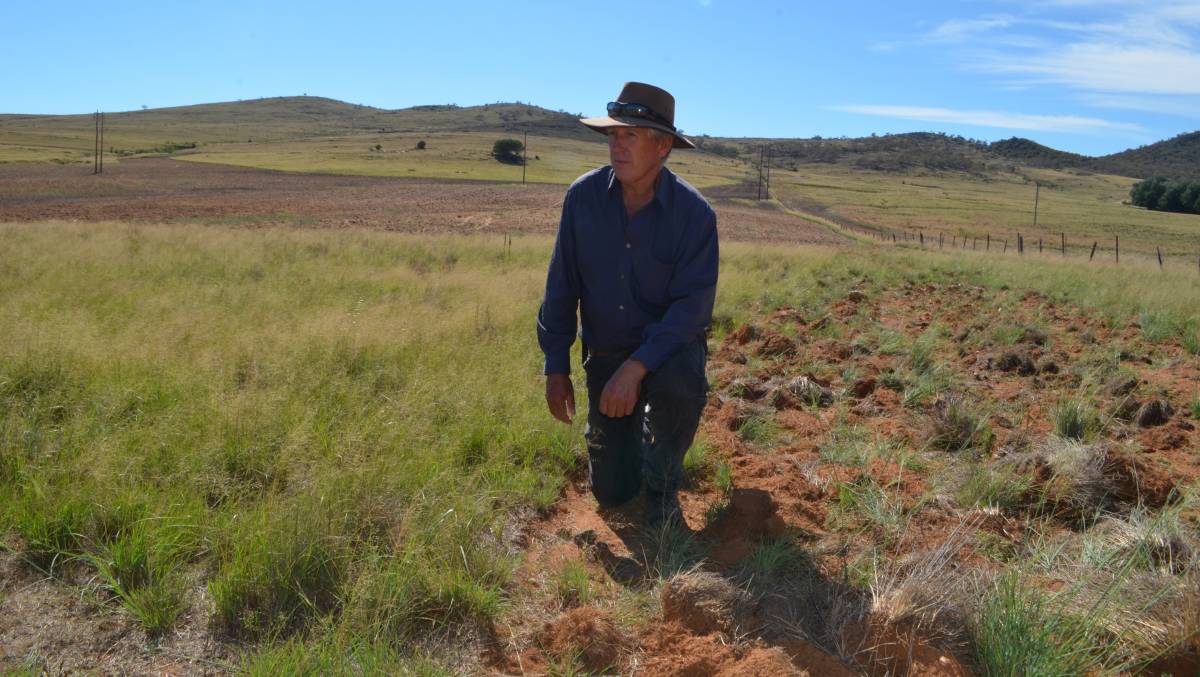 David Goggin showing the African Lovegrass infestation of a rocky outcrop his paddock, and in the background can be seen the arable section prepared for sowing with oats when it rains.

African lovegrass' dominating presence on grazing properties and adjacent bush country has been highlighted since the droughts which blighted the Monaro during the 1980's.

THERE was a time when African Lovegrass ranked low on Monaro farmers’ concerns.

African Lovegrass had a minor presence on farms north of Cooma during the 1930's, but it's dominating presence on grazing properties and adjacent bush country has been highlighted since the droughts which blighted the area during the 1980's.

The apparently contradictory nature of the grass, is that despite it’s rampant growth following the smallest fall of rain, when it is green, stock find it quiet palatable.

But, as landholder, David Goggin, “Billilingra”, Cooma, pointed out, after the first frost, there is absolutely no value in the plant for his stock.

“We get good grazing when it is green after summer rain, but nothing during the winter,” he said.

And indeed, the dominant growth of African Lovegrass completely obliterates native species as easily as the introduced sub-clover and phalaris species which also provide superior grazing.

Further, the rampant growth of the non-native specie which has so easily adapted to conditions on the Monaro, and is now spreading to adjacent regions is creating hazardous bush fire conditions.

According to information provided by NSW Rural Fire Service, Monaro District Officer, Cooma, Fred Nichols, “there is the potential to have a fire anytime during the year.”

“We now have a 12 month bushfire season because of the African Lovegrass,” he said.

“Unlike other grass fires, Lovegrass fires are extremely hard to fight, and especially under windy conditions, but also because it burns in three stages and at different speeds.”

Mr Nichols noted those three stages as (1), burning the top of the plant, (2) burning the stem and (3) continue burning to the ground.

“But the single biggest risk is re-ignition, as the fire can start at any time even though it might be thought to have been fully controlled,” he said.

Grazing value diminished on the Monaro

Beside the ever present risk of fire, the other serious effect of major infestation of African Lovegrass is the drastic loss of production.

On his 4400ha property, “Billilingra”, north of Cooma, David Goggin has seen the grass take hold of his country since the dry periods during the 1980’s when the ground was left exposed and therefore ideal for the plant to set seed and spread.

“We have gradually lost production,” he said.

“Our sheep numbers have decreased by at least 50 percent, due to difficulty in taking ewes through the winter, although I can maintain our cattle on the rough growth by feeding them lucerne hay.”

Mr Goggin noted the conundrum he faces because the grass does respond to small rain fall during the summer.

“With 10mms rain, it grows quickly and the stock will do quite well on it,” he said.

“But with the first frost, we lose all value and when we need winter pasture for our stock, we really struggle.”

Mr Goggin has done all he can to have some control over the spread of the grass, but admits work is ongoing.

“All we can do is plough what we can and crop with oats or turnips,” he said.

“It breaks the seeding cycle short-term, but the seed can blow in from areas we can’t cultivate.”

Burning also only provides short-term solutions, and spraying is costly and time consuming.

On suitable paddocks, Mr Goggin is now establishing pastures with at least 80 percent lucerne content, because he can use ‘Taskforce’ to spray Lovegrass without affecting the lucerne.

“We can also burn during September, but it comes back again soft and green after rain,” he said.

“We might think we are on top of it, but the Monaro will never be the same again.