AUSTRALIA’S last major tomato processor is increasingly reliant on technology to remove costs from its operation, and the global company is turning to locally grown solutions for its supply chain.

The Japanese-owned company, globally the world’s largest tomato processor, has turned to local software developer Advance Computing, based just down the road at Kyabram, to help it squeeze the supply chain costs until they squeak.

Using a web of interconnected devices, or an internet of things (IoT), Advance Computing has developed cloud based system for Kagome to keep track of tomatoes through the production process. “We have to invest in technology to offset Australia’s high cost of production, and there is only so much you can do to lower input costs,” said Kagome’s field operation manager Nick Raleigh, who runs the intense 70 day harvest cycle with 100 B Double trucks delivering 4,000 tonnes of tomatoes each day.

Kagome invested heavily in its Australian operation, which it acquired from Cedenco in 2010. In 2014 it tipped $21 million into its plant at Echuca, Victoria for upgrades which included the addition of carrot processing capability to add a counter-seasonal line to its tomato business.

The plant supplies bulk diced tomato to companies like Simplot, as well as pastes and other bulk products to Yum! Brands (owners of Pizza Hut, KFC and Tco Bell).

Radio frequency identification (RFID) tags are used to track tomato storage bins from the paddock onto trucks, through unloading and into the processing plant.

Kagome is supplied in a n even split between company owned produce and contracted farmers. All harvesting is done by Kagome, using its own harvest fleet – which with a few modifications can collect tomato crops at 150 tonnes per hour, as well as carrots in winter.

Iot devices on the harvesters are connected to RFID scanners on the collection bins. Tractors carry the bins as they chase harvesters up and down crop rows. A load cell on the tractors, connected via Bluetooth, weighs the bins to provide real time readings.

“At any given point, we can see how many tonnes have been collected in the paddock and are coming in to the weigh bridge (at the processing plant),” said Advance Computing director Bryant Alford.

A web App enables Kagome’s logistics team and drivers to cart the perishable product on a first in, first out schedule while maintaining and efficient, steady flow into the plant.

“The logistics team (at the plant) can see the information on each bins in the paddock and advise drivers which ones to pick up first, so they aren’t sitting in paddock too long,” Mr Alford said.

“They can also manage how much product is on farm and adjust the speed of harvest to suit how much is already in the factory.”

The system has cut down on the hundreds of daily phone calls Kagome’s logistics team would make during harvest, and an “enormous amount of confusion”, as well as sleepless nights wondering where the harvesters were up to, Mr Raleigh said.

The wealth of information collected in the paddock is carried through the supply chain. When a bin crosses the weigh bridge at the plant, and is tipped into the processing line, an IoT device reads when the bin was harvested, and the GPS location it came from. 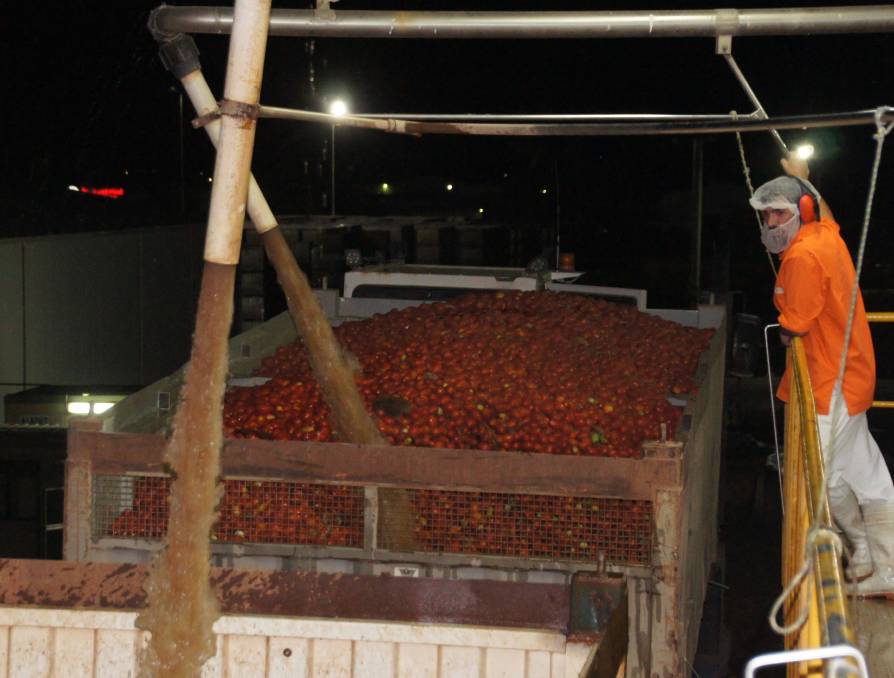 Kagome's harvest doesn't stop for anything, running 24 hours a day for about 70 days when the tomatoes are ready.

One example is when the bitter paddy melon weed is picked up by quality control sampling at point of entry to the plant. Kagome can see instantly when and where the bin came from, alert the harvest and halt supply.

“I can go the production line, get packet of paste and know when it was packed and go back to where and when it was harvested. We would never have had that visibility before this system,” Mr Raleigh said.

Previously, a product audit would have required a mess of paper files and a bit of guess work, he said.

The IoT solution from Advance Computing was developed with assistance of software partner Microsoft Australia, which supplies it Azure platform and cloud computing services to manage Kagome’s data.

The technology is doesn’t only offer benefits to the processing end of the supply chain.

The GPS located IoT system means yield can be tracked against paddock boundaries and visualised in heat mapping of fields, which will be collected over time to show productivity rates and yield patterns.

Kagome is working on using this information to help forecast production and plan for potential yield ahead of harvest.

Traceability is also key to Kagome’s aim to extract value from the provenance of its product.

“The future for this business is to be known as the highest quality tomato product processor in the world,” Mr Raleigh said.