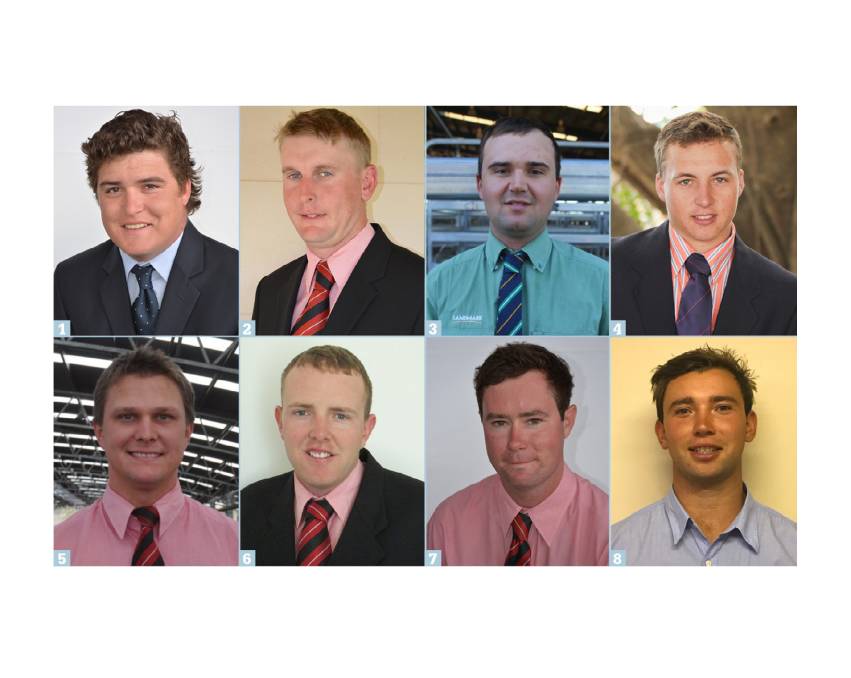 EIGHT agents from across four states will battle it out with the best for the title of the nation’s best young auctioneer.

EIGHT agents from across four states will battle it out with the best for the title of the nation’s best young auctioneer. VANESSA BINKS chatted to the finalists to find how they are preparing and what drives them to succeed at the big event on April 6.

MAINTAINING a simple life outside of the saleyards and warming up to a number of American country music legends are only a couple of ways Tom keeps himself on top of his game.

Selling out of Gunnedah saleyards for about six years, Tom is looking ahead to his company’s Powerhouse Weaner Sale at Gunnedah on March 30 to squeeze in extra practice for Sydney.

“It would be our highlight sale of the year and I will hopefully sell quite a few head to polish up for Sydney,” Tom said.

Putting his hand up to write an essay on the great reasons for why he became a livestock agent, his main reason was to return to his rural roots and “be involved with cattle in one way or another as a career”.

“I love interacting with people and being in a different place each day - working outdoors and being able to try and make clients happy by achieving good price are always big drivers in the job too,” he said.

SCONE’S Zac Ede, has found his place with the Elders team as the territory livestock sales manager and has now racked up four years of selling experience.

With his childhood beginning on a dairy and beef farm on the Mid North Coast, Zac spent his early days pacing the saleyards with his father before walking the lines at the Scone saleyards.

Zac has his eye on the big prize in Sydney this year after getting a taste of an adrenaline rush at the 2015 Sydney Royal Show when he auctioned the grand champion steer.

With a bit of extra selling experience in the recent months Zac said he hopes it will give him both extra versatility at the 2017 competition.

His immediate career goal is to take out the top gong at the auctioneers’ competition, but most importantly to build a reputation as a respected agent.

A CUP of tea and couple of Alan Jackson songs are two ways Jake prepares for a big sale and the big event in Sydney will be no different.

After two years with Landmark, Jake has well and truly got in the groove of selling, but he has also been selling twice a week at his local saleyards to up the ante for his Sydney preparation.

With a background in the feedlot industry, Jake said he came up through the system, however since his father and grandfather were both agents, he may have been born to do it.

“The best part about being an agent is definitely the auctioneering – it’s the best job and I love it,” he said.

“I like the commercial cattle side of the business because of the process - you are working for your vendor, drafting and preparing the cattle so it’s a pleasure to stand up over the cattle on sale day.”

He hopes the Sydney competition can trump his career highlight of auctioneering at the Landmark Classic Horse Sale.

HOLDING a passion for his campdraft horses and the racing scene, Lincoln enjoys the stud stock aspect in his role of livestock sales because of the professionalism, the vendors and spectators.

After four years in the industry, Lincoln followed his desire to be a livestock agent as soon as he finished high school.

“I didn’t always plan to be an auctioneer it just naturally occurred and panned out that way – and now it’s something I am extremely passionate about,” he said.

Believing the best part of his role is having the opportunity to work with such high quality livestock, Lincoln said “whether it is horses, cattle or sheep in the saleyard, I enjoy it all because the people in this industry are extremely interesting”.

A COMBINATION of rising through the ranks since he was 17 and a stern word from his mother has set Jack on a path to becoming the livestock manager for Elders.

After eight years of commitment to the industry and displaying traits of a talented auctioneer, Jack has also found himself in the unlikely place of the horse racing box when he was approached to call the Yunta Picnic Races last year.

“I have a passion for the industry but I became an agent because my mother told me I couldn’t leave school unless I had a job - somebody suggested to me that Elders would be a good place and I have never looked back since then,” Jack said.

“The feedback from vendors are a great part too, it gives you confidence to build your ambitions.”

ORIGINALLY from Temora, Dean found his way to Elders at Wagga Wagga before heading to Keith in south-east South Australia to pursue his livestock auctioneering dream.

Dean said although his career dream was to become an auctioneer, as time has gone on, his focus has switched to performing for his clients and offering them a service which is different from the rest.

Choosing to make the big move away from his father, a well known agent, was not an easy decision however when a local mentor and inspirational figure sat Mr Dean down “for a talk”, if was much clearer.

“He sat me down and put me on the straight and narrow - I didn’t really want to leave home but he said you need to leave and make a name for yourself or else you will only be known as your father’s son,” Dean said.

HAVING his father, a well-known livestock agent, as his mentor and inspiration has helped Toby reach great personal heights in his role as territory sales manger.

Selling for two and half years, this budding auctioneer’s ultimate career highlight came in the form of the Hay September sheep sale, with Toby labelling it the “Holy Grail”.

“It’s a great combination of a huge crowd and the best of best sheep in the pens as well,” Toby said.

“But it was extra special because my father had just retired after 30 years and I had the opportunity to stand over his clients stock and sell to a massive crowd – it was incredible and a very memorable sale.”

Hoping to take a few tips from Elders auctioneer, Dick Douglas, Deniliquin, to the Sydney competition, Toby is hoping to get all his experience together from start to finish and critique himself as best as he can before the big day.

“I am definitely focused on getting new clients because selling stock is not just our job, but it’s their bread and butter - that’s what pays their bills and it’s their life,” Toby said.

ALREADY reaching one of his career goals of becoming a livestock agent within a private business, Jack Hickey is still remaining on quite the ambitious path.

Jack believes that everybody aspires to be successful and therefore wants to be the best and that carrying this thought throughout his career has ensured his ambition to grow and succeed has remained.

“I am happy with how things are progressing but in the long term the aim is to become a share holder or something similar – so hopefully that opportunity will come down the track,” Jack said.

“Ultimately it is just to be the best auctioneer I can be in my area,” he said.

After recently changing companies to J.M. Ellis’s it has become a rewarding challenge for Jack after moving from predominately a cattle area to sheep.

“I was in a big cattle area and now I am in a big sheep area – I still enjoy selling both species but because I am selling a lot of lambs and sheep now that’s probably where my main focus is,” he said.

“The opportunity to come back to sheep has shown me how much I have learned – now I have been able to build on that.”

The key to Jack’s confidence growth has resulted from sales in the recent summer months when lamb numbers hit their peak.

“It’s always a great inspiration when after a sale the vendors come up to you and thank you for the job; it’s always rewarding.”