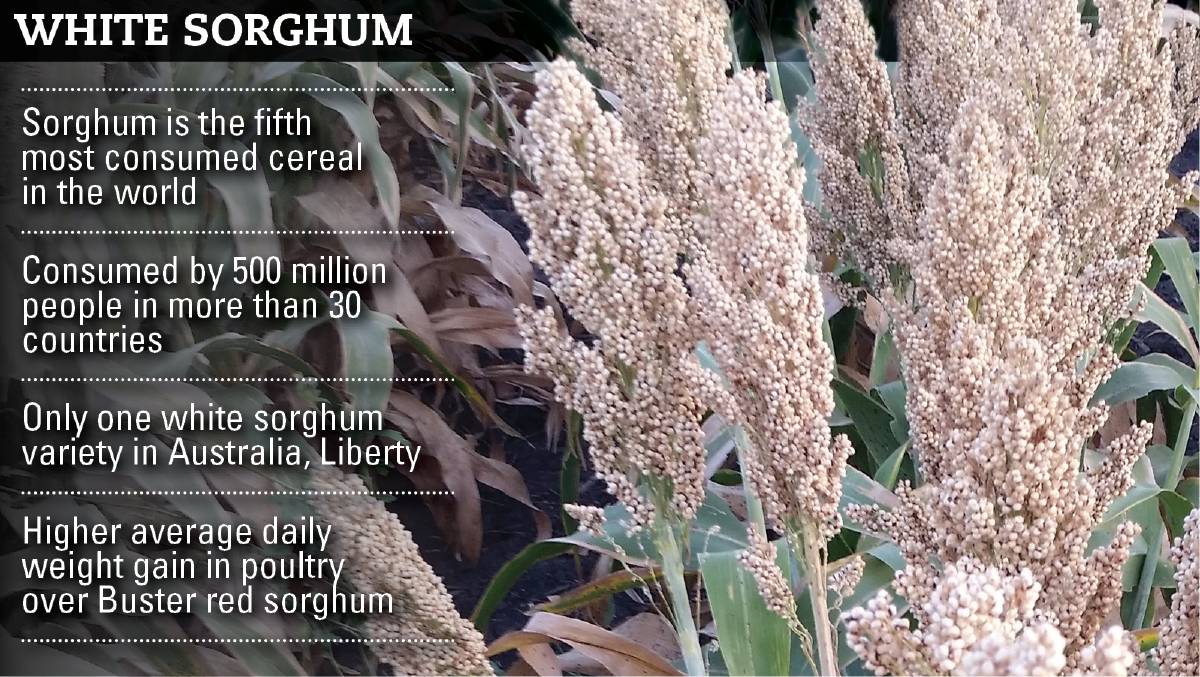 White sorghum could be the answer for the gluten-free market.

WHITE sorghum could be the answer for the gluten-free market, but a lack of education about how to use the ancient grain is curbing demand, while the lack of premiums for farmers is curbing supply.

White sorghum makes up less than five per cent of Australia’s total sorghum crop, but has shown promise in poultry and pig nutrition, with better weight gain over red sorghum.

It’s also filling the gap for coeliac or gluten-intolerant consumers who need an alternative to wheat-based products.

But there’s a big stretch from research proving its higher level of nutrition to premiums paid by either the stockfeed or human consumption markets, which is needed for growers to make the switch from red to white sorghum.

Agronomically, there’s not much difference, with competitive yields compared to red sorghum, according to Queensland Department of Agriculture and Fisheries plant breeder Alan Cruickshank, Warwick.

“There’s a strong perception that white sorghum is more susceptible to weathering, but it could be that it’s just not as obvious on red sorghum,” Mr Cruickshank said.

Australia is far behind the US, where sorghum has become the go-to gluten-free food. Sorghum has been a staple food for thousands of years in Africa, and is used in liquor in China.

“But there’s no consistent market that creates a pull for it.”

Creating that market is difficult, but the first step is quantifying the benefit of white sorghum over red sorghum, particularly in the pork and poultry industries.

Liberty white sorghum has resulted in higher average daily weight gains than Buster red sorghum, with the white variety easier for animals to digest, according to Peter Selle, adjunct associate professor in poultry nutrition at the University of Sydney.

“We think it’s because red sorghum is red due to polyphenolic pigments, which white sorghum doesn't contain and that’s why there’s better utilisation of energy from starch,” Dr Selle said.

“That energy is why you're putting sorghum into poultry or pig rations.

“Liberty also has quite low kafirin (the dominant protein fraction in sorghum) concentrations, so we think there should be a focus on developing sorghum with low protein content and low kafirin concentrations.”

RON Plant, the man behind the SorgPlus ready-to-eat line of pearled sorghum, is expecting big things from sorghum as the grain becomes more readily available and accepted as an alternative to rice and pasta.

Mr Plant, who's a part owner of Maralong Milling at Westbrook, near Toowoomba, said white sorghum made up two-thirds of the 300 tonnes of sorghum milled each year.

“All of our sorghum goes to the food industry,” he said.

“We're selling a fair bit into the bread industry, making gluten-free breads and cookies, and we sell to Ethiopian bakeries in Brisbane and Melbourne to make injera bread.”

“It's a firmer product and a bit chewier than rice, and can replace a couscous, which is wheat based,” Mr Plant said.

Mr Plant said the grain had taken off in US, and he hoped it could have the same reaction in Australia.

"It might take a while, but there's a lot of opportunity for sorghum, especially with the gluten-free market.”

Mrs Owen and her business partner Felicity Philp set up the Friendship Food website and cookbook to promote wholefoods and share their gluten, dairy, yeast, egg and refined sugar-free recipes.

With sorghum being naturally gluten-free, it’s the perfect grain for coeliac and gluten-intolerant consumers, but some people still find it difficult to work with.

“I think the reason it has proven to be a little difficult to sell to the general public at the moment is because it is not just a ‘one-for-one’ swap with wheat flour in regular recipes,” Mrs Owen said.

“To achieve a similar result to wheat flour you need to combine sorghum flour with a number of other flours such as brown rice flour and arrowroot, even quinoa flour, white rice flour or potato flour and a gum such as xanthan to bind it together.

“So in light of this your average person is unlikely to understand how to combine them and even less likely to have the time or money to buy these different flours then mix them together.”

To combat this, the team has developed at sorghum bread premix.

“It makes a delicious tasting loaf of bread, but it is of course quite a dense loaf so you really only need one piece,” Mrs Owen said.

“We find that since most people are so preconditioned to the fluffy white bread of today, the concept of a dense loaf is somewhat challenging.”

Managing director Quentin Kennedy said the need for gluten-free foods had been the driver behind sales of sorghum flour.

The business is based at Toowoomba, and exports to  New Zealand, Singapore, South Korea, Japan, Indonesia, Taiwan, Malaysia, Italy and the United States.

“We've been selling red sorghum for five or six years, but we moved to all white because it was a bit more popular," Mr Kennedy said.

“Customers have found it's not an overpowering flavour like red sorghum – the white sorghum is a little more mild."

Sorghum flour from the Liverpool Plains

TWO Quirindi families have supplied white sorghum products to the gluten-free market for almost five years, and they say demand is growing. The flour can be used in place of wheat flour in most recipes, but the team has also done plenty of test baking and shares recipes on the product’s website.

“As more bakeries find that it’s available and more use it – they’re lovely the different flavour and texture – ​more consumers are thinking about how they can use sorghum flour. We’re not bakers, but we’ve got very simple recipes using sorghum flour.

“We’ve got to get the message out there, but we’re still a long way behind other countries. In India that’s all they use, in it seems to be very popular in recipes in America.”