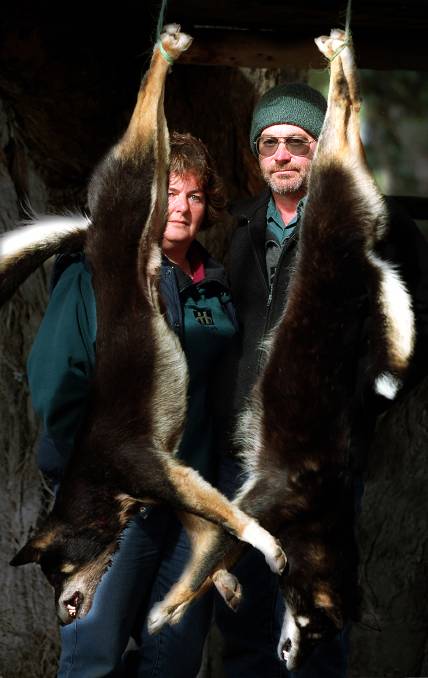 Dalgety farmers, the Mitchells, some of the victims of wild dog attacks.

Landholders in the far south of New South Wales are angry at claims they have dropped the ball on wild dog baiting.

Losses around Dalgety have been severe lately with reports one farmer has lost 400 wethers to wild dogs. Also, one farmer has moved from sheep to cattle grazing because of the recurring losses from wild dog attacks.

Mr Brewis said his mother who ran a nearby farm had got out of sheep to only run cattle because of her recurring losses.

He said that the Local Land Services had put out so many baits to catch the dogs “the dogs would get fat” if they had eaten them all. He said the area had one of the best trappers in New South Wales who performed an invaluable job. He said the problem was many of the dogs simply avoided the baits. He blamed the losses on just two dogs, one a black dog that had been terrorising the Dalgety-Jindabyne area for about six years.

“We catch their pups but we cannot get these two adults,” Mr Brewis said.

“Mr Mifsud’s comments are way off the mark. We put plenty of baits down but they are not working at all. To say we’ve dropped the ball is a lot of rubbish.”

Recently Mr Brewis has worked with the National Parks to erect a 20km electric fence to help keep the wild dogs out  (at a cost of between $50,000 to $100,000). He said trappers in the park were under duress and had to continually report in to management which was affecting their work in the park. “Our park trapper is actually very good,” Mr Brewis said.

One problem dog was shot three weeks ago in the area. Mr Brewis blamed the stock losses on  just two dogs, one of which had actually been seen spitting out a dog bait after picking it up. He got a line of sight with his rifle on one of the dogs one day but it was too quick and got away.

Invasive Animals’ national wild dog management facilitator, Greg Mifsud,  had warned it was no time for complacency. He claimed Jindabyne area landholders had dropped the ball on wild dog control and the problem was re-emerging. “It only takes a pair of dogs and the problem is quickly back with us,” he said. Wild dogs were under control around Jindabyne about 10 years ago, and people started to think the problem was solved and dropped baiting programs, he said. “But now the dogs are back.  It’s a lesson to be learned.”