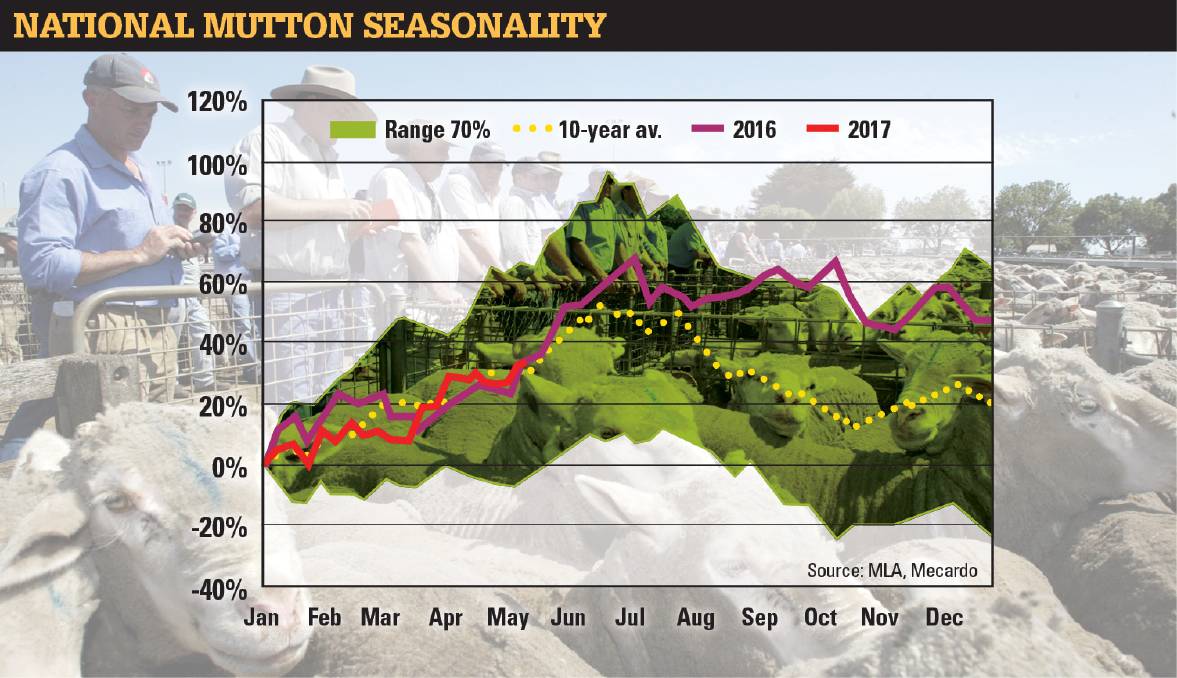 Despite the record mutton prices this season, Mecardo market analyst Matt Dalgleish said the 2017 trend had mirrored the ten-year average pattern, similar to how 2016 played out.

Mutton's crazy prices is just the tip of the iceberg of what’s to come this winter, with analysts forecasting a 610 cents a kilogram peak.

MUTTON’S crazy prices is just the tip of the iceberg of what’s to come this winter, with analysts forecasting a 610 cents a kilogram peak.

That will be a climb of nearly 60 per cent on year ago levels, and a rise of nearly 200c/kg on the National Mutton Indicator (NMI) since this year sales commenced.

“Producers don’t need to bring stock forward with all the pasture and cheap grain that is around - they’re in the driving seat,” Mecardo market analyst Matt Dalgleish said. 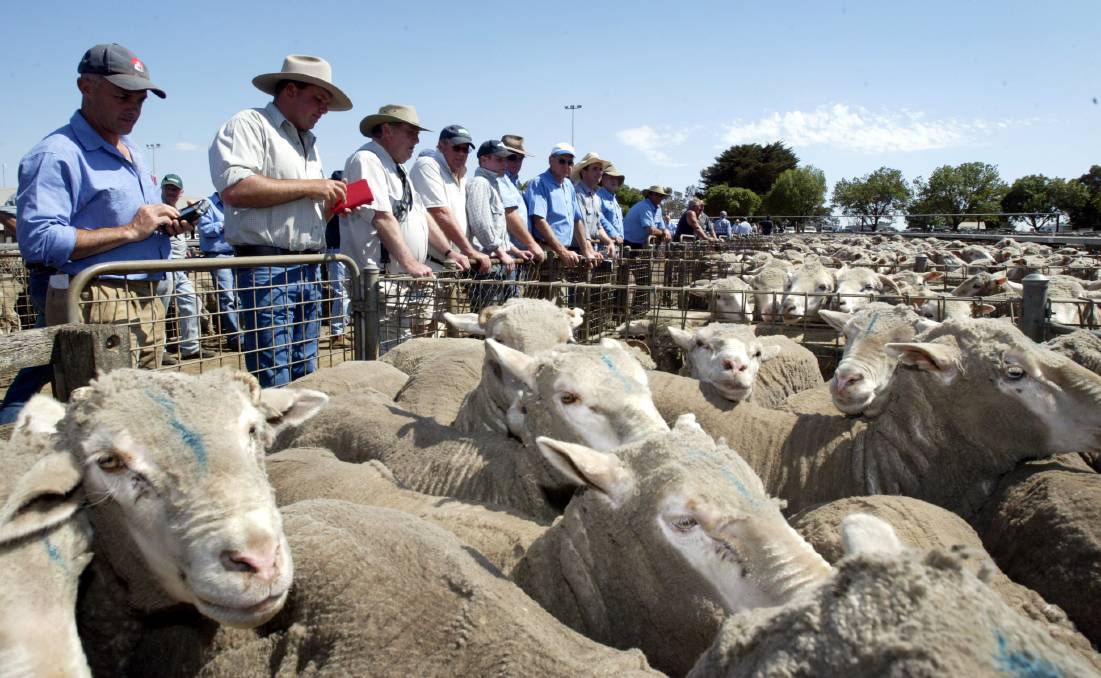 Flying high: Prices for mutton sheep at Hamilton have been very buoyant in recent months with ewes fetching up to $170 on Wednesday.

“Because supply is tight, producers will hold off selling if prices come off.”

National mutton yardings have been close to 60,000 weekly for the past fortnight, while eastern states mutton slaughter hit 85,712 head last week.

While producers have been enticed by strong saleyard and direct-to-works prices, Mr Dalgleish said there was still evidence of some retaining ewes and wethers for flock rebuilding and wool production.

With Mecardo forecasting the Eastern States Trade Lamb Indicator (ESTLI) to peak at 755c/kg this winter, Mr Dalgleish said a 35pc hike for mutton was feasible in the coming months.

Despite mutton experiencing prices records this season, he said the market was still mirroring the ten-year average pattern which correlates seasonal demand with prices.

He said the major factor which could bruise predictions would be if supply increased beyond forecasts, winding-back forecast flock rebuilding estimates to capitalise on market prices.

Another influencer working in favour of high mutton prices was the Australian dollar.

“Mutton is more sensitive to exports - you might find the market limitations will be dependent on how far processors can pay-up and that is a factor dictated by what the Aussie dollar does,” Mr Dalgleish said.

“The market is tracking similarly to the 2010-11 period where the AUD dollar was above parity so with the dollar coming off has provided a buffer, and even more so if the AUD declines below 70c by the end of year.

“That will allow processors to pay more in the saleyards because, in relative terms, they will receive more in US.”

The demand is translating to epic journeys for sheep, with AuctionsPlus reporting an increase in cross-border sales activity, including a purchase which led to Merinos travelling 1900 kilometres from Longreach, Queensland to Orroroo, South Australia.

The four-year-old ewes weighed 58.5 kilogram, were not-station-mated, and were purchased for $210.50.

“The last 12 months have seen larger numbers of sheep moving back into QLD which has no doubt been impacted by more favourable seasonal conditions, the current record wool market, cluster or feral fencing, and high cattle prices prompting some producers to turn to sheep when looking to restock,” AuctionsPlus market analyst Tom Rookyard said.

“Mutton prices, combined with a soaring lamb market, have made old joined ewes a very attractive option for a quick turnaround with two returns, and even more so with a reasonable wool clip on their backs.”

Earlier this month heavy first cross ewes sold online to $351.50, which were purchased from Curramulka, on SA’s Yorke Peninsula, and remained state-based in Narraoorte.

“We have seen South Australian sheep heading across into New South Wales and Victoria, highlighting the need for growers and vendors to secure the right bloodlines or stock for their operation,” he said.

“The prices which older breeding ewes are obtaining at the moment really demonstrate supply constraints which producers are dealing with.”

While the forecast seems surprising, stock managers have not ruled out such extraordinary price rises.

“I think processors expected a lot of scanned sheep to come out of the system but people have given their joined empty sheep another go,” Elders livestock manager Ron Rutledge said.

“We keep thinking the record price rices couldn’t be achievable, but maybe it is with the right restriction on numbers.”

The demand is translating to astonishing prices in the saleyards, with agents reporting sheep making more than $300/head at store sales.

“We’re seeing confidence in the marketplace which is giving extra rates because people believe the market will continue,” Mr Rutledge said.

“Winter has been modestly mild up-to-date for lambing so people are upbeat.

“All the analysts and banks are starting to suggest sheep, wool and prime lamb production is the industry to be in - sheep are a good outlet.”