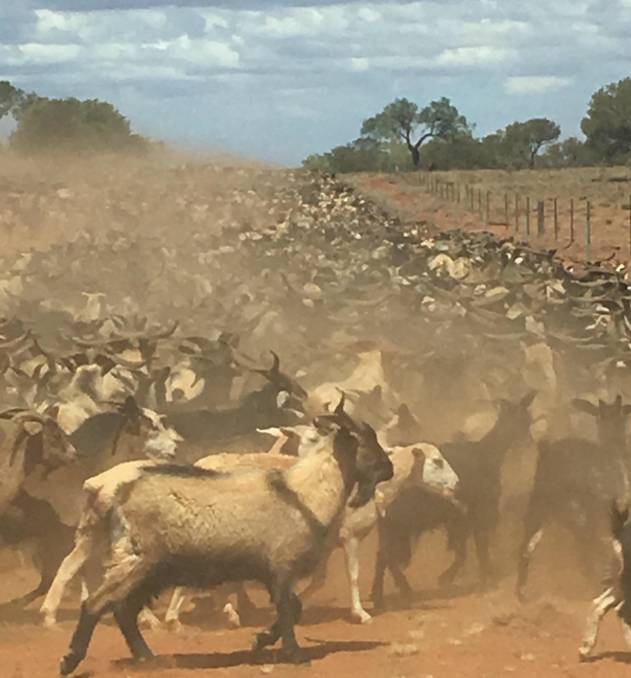 The opening of the Bourke small livestock abattoir will be a game changer for the goat industry and for Bourke. The project site is being prepared for major infrastructure being constructed in Australia and overseas.

Construction of the region-changing $60m Bourke small livestock abattoir is underway with earthworks and the laying of concrete slabs confirming the developers are moving to a possible early 2018 start date.

Project meetings between developers Capra Developments and Bourke Council have started with upgrades to local roads organised, and negotiations with the Roads and Maritime Services to create a turning bay into the abattoir site off the Mitchell Highway, 14km north of Bourke.

The exciting project aimed at tapping into the lucrative export goat market includes a $10m investment from the Federal Government’s Stronger Regions Fund - the biggest grant in the electorate of Federal Nationals Parkes MP Mark Coulton.

When the abattoir is fully operational there will be about 190 full-time jobs on offer. It is expected to boost the Bourke regional economy by 30 per cent - about $50m a year. There will be a major spin-off for jobs in Bourke itself. Already more than 25 people are on site helping with construction. Locals already have been urged to go to the site to sign up for jobs.

Both the Federal Government and Capra are pushing a “locals first” policy for jobs. Inevitably though, with the skilled nature of abattoir work, workers will have to be sought from throughout NSW and Queensland and also overseas, although the owners will be battling changes to the 457 migrant worker visa scheme.  Mr Coulton though told The Land there would not be a hitch in bringing in workers from overseas under the new visa system replacing 457 if needed. He emphasised the need to get workers from the Bourke area first. Mr Coulton said he was excited the project was underway and had every confidence it would open on time and supply met. The abattoir is located in Australia’s goat heartland,  with an estimated 5.8 million goats in western NSW.

Anecdotal evidence though challenges this figure from producers who know helicopter and light plane pilots who have recently flown over goat rangelands. The DPI is about to start a new goat count – which doesn’t  differentiate between wild and managed goats.

Capra’s business advisor James Price, of JPA Business in Orange, said there were still a number of issues to work through including an environmental operating licence, but he was confident the abattoir was on track to start operations in the new year.

The operating plan is to have 6000 goats slaughtered at the facility per day - about four roadtrains full of goats. It is believed the abattoir will start with a 3000 a day target for the first year.

Part of  the abattoir’s infrastructure is being prefabricated overseas.It will  be a state-of the art  abattoir with an automatic chain not seen before in Australia. It will enable the abattoir to cut up carcasses into smaller portions. At the moment, the export market is six-cut or whole carcass. The meat will be sent through the port of Sydney, with North America the major market - goat is prized by people of Hispanic origin. Other markets will be South-East Asia and the Middle East. Mr Price said Capra hoped to reignite Chinese interest, which is often fluky, as goat is mainly sought after for Chinese New Year.

Capra may fill a gap in the market. Mr Price said he was confident goat supply would not be a problem for the Bourke abattoir.

Bourke mayor Barry Hollman said after talks with Capra last week, he was very confident about the project, which could create a new era of prosperity for Bourke.

Bourke Motel operator Gary Way said the abattoir was “only a positive for the town” and “would be a big boost.” “I’ve already had contact from a contractor regarding accommodation to do with the abattoir, so it’s starting to feel real,” Mr Way said.

One of the major issues is goat supply. Some goat farmers near Broken Hill were skeptical the abattoir would get enough goats to fulfill orders. “Economics” would play a major part on whether they’d send goat stock to Bourke. All agreed it would save freight costs. Far Western goat suppliers Lachlan Gall and Katie Davies though both praised the idea of the abattoir and hoped it would be a success. Getting western graziers to think more “goat” was part of the clincher.

Turning from rangeland to managing goat herds with improved fencing is an expensive exercise, with netted fencing costing up to $4000 a kilometre.

Mr Gall,  President of the Pastoralists’ Association of West Darling, said though with  drier times predicted, many western division  goat producers are responding to current record prices and deteriorating seasonal conditions by trucking (selling) as many goats as they can muster at the moment. Goat producers were also holding back breeding stock to build up numbers.

The industry was in a rebuilding phase, according to Meat and Livestock Australia’s Julie Petty, who  said it was an exciting time for the industry with potential new markets in Europe. Goat meat was being included in new Brexit trade talks.  She agreed a big challenge was getting western graziers into goat production.