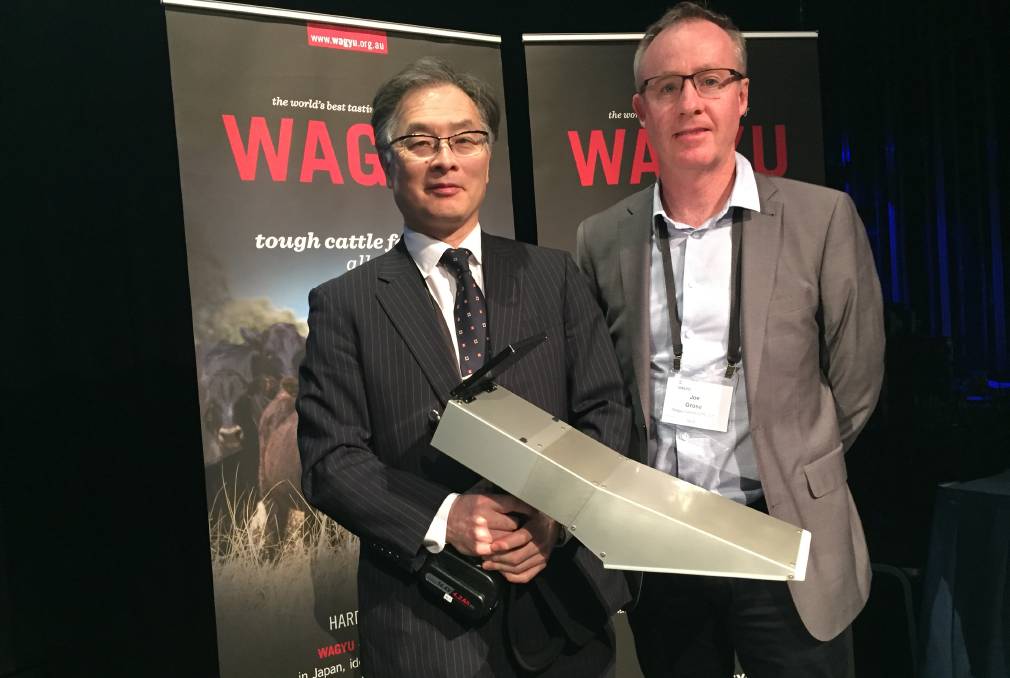 The hope is it will work hand-in-glove with objective measurement technologies for lean meat yield and other traits to take beef production down a real high value, consumer-focused path.

A Japanese-developed digital carcase camera has just been trialled in abattoirs owned by some of the larger processors in Australia and the results have exceeded expectations.

At the same time, in rib eye area calculations it has 97 per cent correlation with MSA graders.

The camera has been developed by Meat Image Japan (MIJ), a company which has been working closely with the Japanese Meat Graders Association (JMGA) to bring objective carcase measurement technology into the calculation of traits such as rib eye area, marbling (intramuscular fat) and meat colour and fat colour.

JMGA beef carcass grading standards have been developed to measure those carcasses that are yielding higher marble scores.

Accurate measurement of Wagyu carcases is crucial for worthwhile performance recording and the carcase cameras have provided data with integrity.

MIJ director and Professor at Obihiro University of Agriculture and Veterinary Medicine in Hokkaido Japan, Keigo Kuchida has just finished initial testing of the camera in Australian abattoirs.

Dr Joe Grose, who facilitates MIJ’s activities in Australia and has been working with Western Australia’s Murdoch University on validation benchmarking against master MSA graders, said initial results showed the technology had a higher overall predictive value on eating quality.

There was plenty of support from major packers to develop the technology to a commercial level, he said.

The unit is the second generation of the digital camera technology, with the original used to great advantage in Australia, including by big pastoral outfit AACo for Wagyu genetic selection.

It is widely used in Japan by all major breeding companies in validating estimated breeding values for carcase traits in their progeny test programs.

The new version is more compact and therefore easier to transport and use, Dr Grose said.

“Even more important is its ability to transmit data, as it is collected, into a cloud-based application so that it can be analysed almost immediately,” he said.

The Australian trials saw the camera capture data on 300 bodies an hour, he said.

The camera effectively takes a trapezoid photo, changes that to rectangular format, creates even lighting and then flips the photo.

That process happens in four to five seconds, then the image is flicked by wi fi to the plant computer.